A deeply personal journal of life behind the camera written by Kirsty.
Previous
Back to gallery
Next
26th September 2012 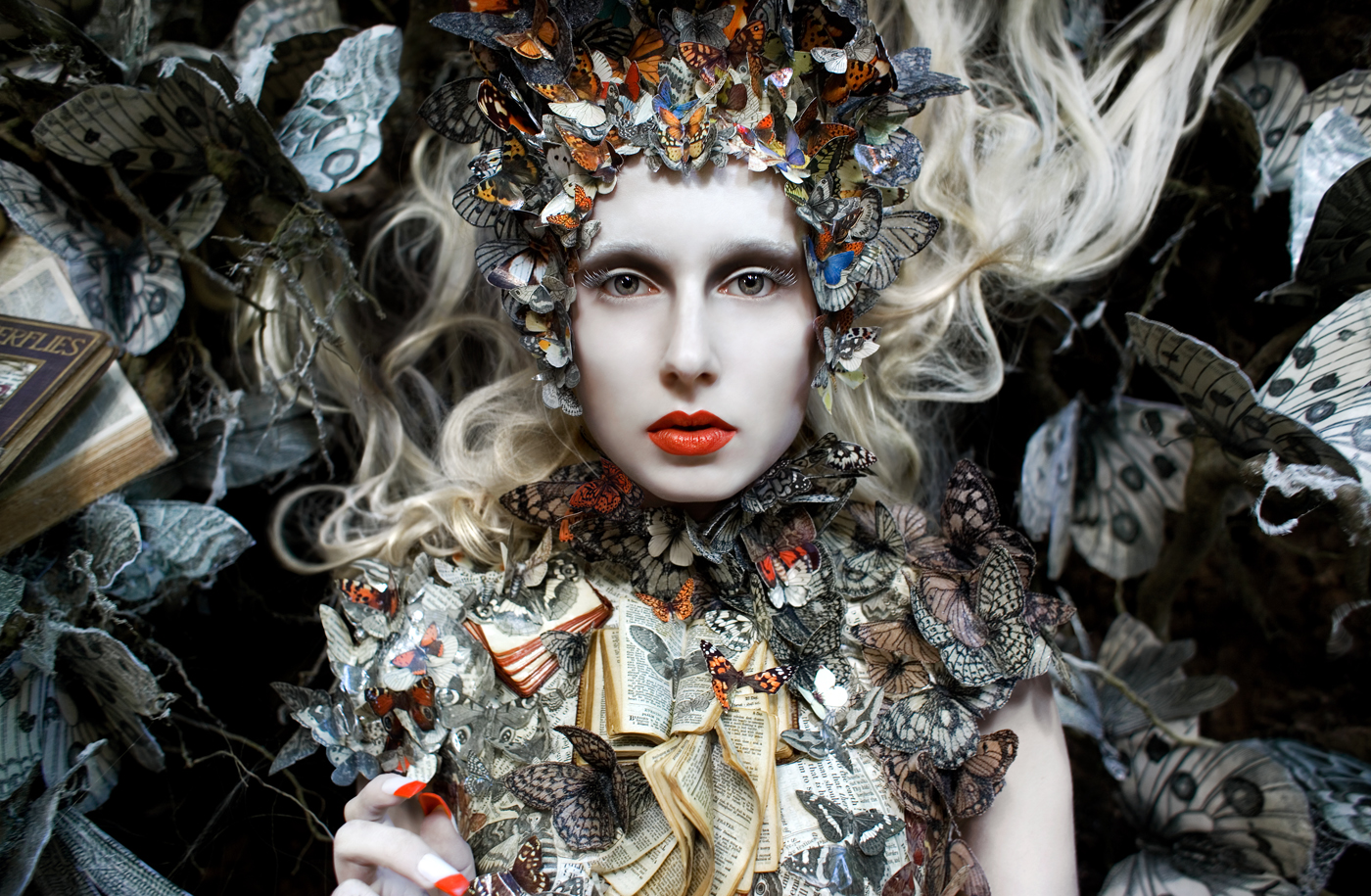 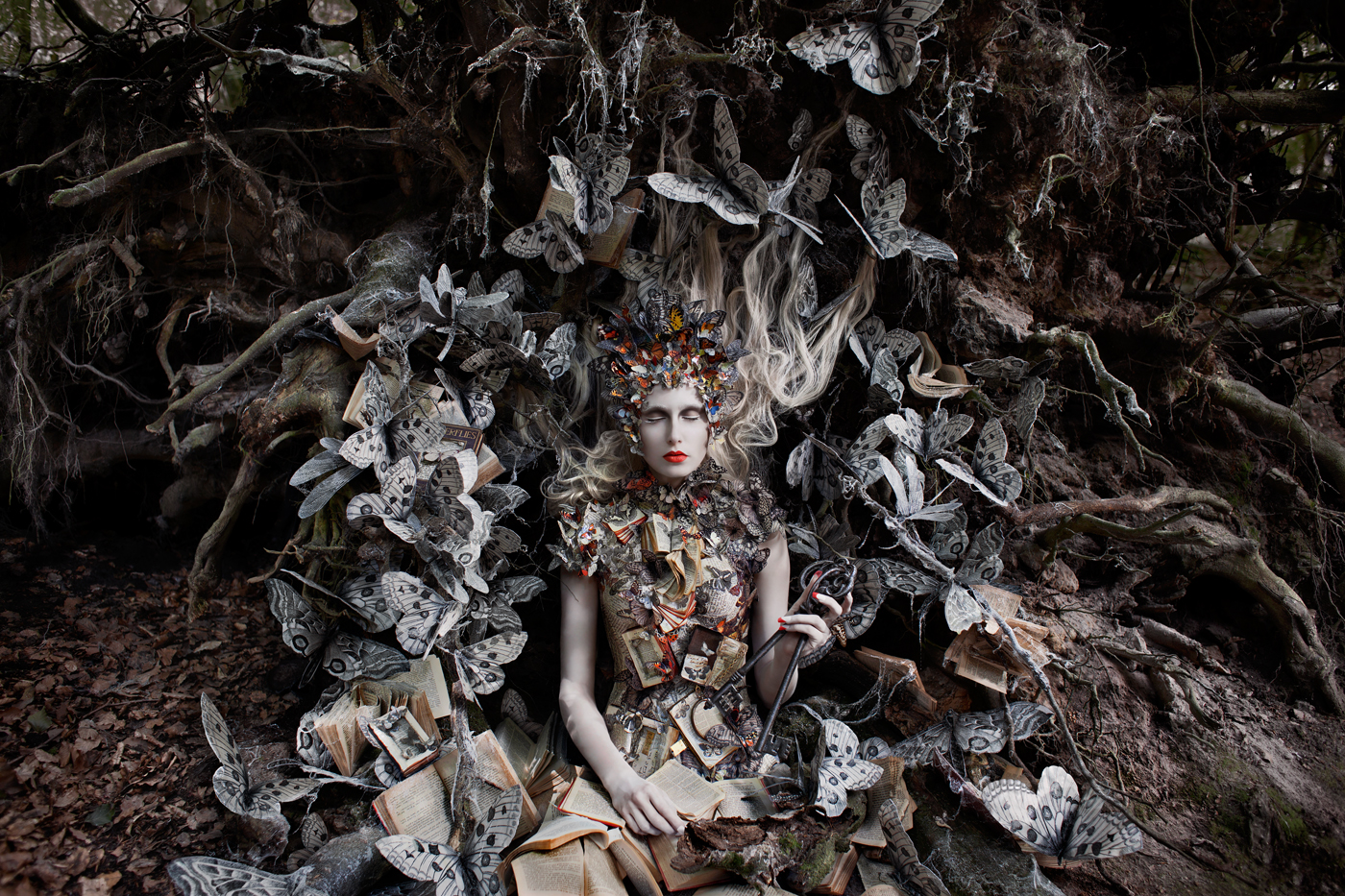 ‘The Last Door of Autumn’

It feels like such a relief to finally be sitting here writing a new Wonderland entry. In recent months the series has been completely taken over by exhibiting and writing endless letters to people about the future of the project. Progress is so slow some days I find it agonizing, but there is simply no way to create these images quickly, they are a labour of love and I just have to keep working until I make it to the end. Over the last few weeks during the London show many people have asked me why I insist on making everything by hand and spend months on just a couple of pictures. I found my only explanation was simply that my mother did the same for me and her pupils, except in her case it was years devoted to helping us grow and develop. I wanted to produce works that reflect a similar belief in investing time and love, and I suppose this is one of the most poignant parallels between our relationship and my work.

So at long last I can introduce ‘The Ghost Swift’. She has been locked away in my head for over a year, and her character has been one I have constantly returned to, slowly making her costume in stages adding a little piece here and a little piece there, whilst her scene has evolved from being relatively small to something much bigger. Her character represents a creature born from the essence of stories, a body of books and forgotten ripped pages, created by the natural elements and insects that surround her. I wanted her half human form to be a marriage of the earth and printed words; spun together by the moths and butterflies that shared the hollow she would spend her life guarding. I named her lair ‘The Last Door of Autumn’, an impassable place without the heavy iron keys that hung in her lap from her pale long fingers.
For this scene I wanted to create an image steeped in the trickery of tales, and so my choice to use paper was a direct link to the true story of the Cottingley Fairies which my mother told me about when I was young. I have been mildly obsessed with the history of the Cottingley photographs for most of my life, the fact it was all a lie maintained by little girls until their old age both inspires and intrigues me. Personally I have never liked sickly sweet stories, it is the underlying darkness of folklore, broken promises, and moonlit curses that make my skin prickle. So it was their tale that inspired me to stage my own elaborate illusion in the woods made entirely from paper for the next photograph.

The first of the five Cottingley Fairies photographs, taken by Elsie Wright in 1917, showing Frances Griffiths with the alleged fairies.

I began by collecting books of moths and butterflies from the same historical period as the original hoax, and once they arrived I spent weeks cutting out the illustrations to build a costume made from hundreds of paper cuts. I also designed embroideries based on fine biological etchings from the 1900’s, which were sewn onto sheets of delicate sheer silk, and layered with glue to make sculptural trims. The tiny prayer books on the costume’s bodice were the same precious ones I had previously made a necklace from for the Bluebell shoot in 2010. They had been donated by a family whose grandmother had received them in condolence after her husband had passed away. I felt this mix of beauty and sadness felt so right for the costume, so I embedded them into the bodice and varnished the handwritten messages to the front page where they would remain preserved and never be forgotten.
It was whilst cutting the butterflies that I stumbled on the description of a small British moth called a Ghost Swift in one of the oldest books in the collection. Its markings were a white top wing with a dark underside, so when it hovered at twilight it seemed to appear and disappear with each beat of its wing. It was perfect and magical, and instantly brought the character to life in my head.


Varnishing the paper moth etchings (I lost count of how many I made !) 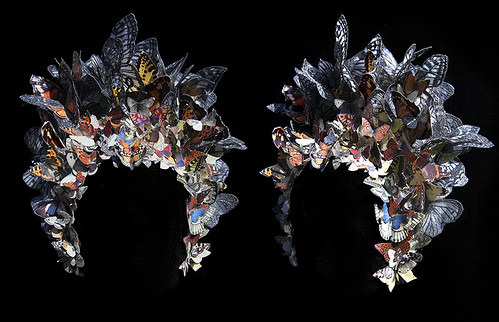 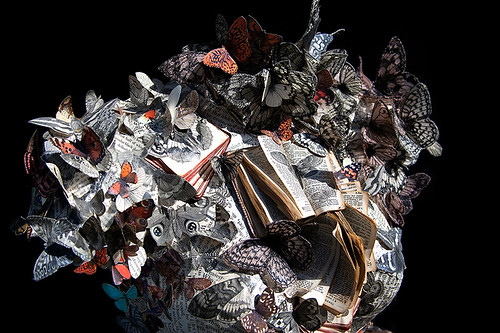 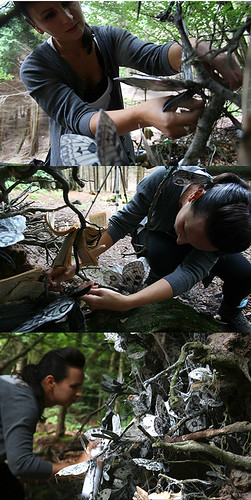 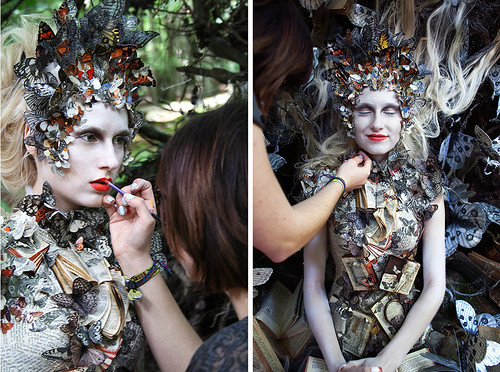 On the day of the shoot I wanted to translate this elusive characteristic into my picture. So we painted our model Dasha’s face and arms completely white and embedded her into the twisted dark roots of a fallen tree to create extreme light and shadow for the finished image.
As well as the full frame scene, I choose to bring the camera in further in the hope of capturing an intense portrait. I intended the viewer to feel as though they had happened upon ‘The Ghost Swift’, silent and asleep after years of being left undisturbed in the forest alone. To suddenly experience her hypnotic gaze as a swirling blur of dark beauty and anticipation. Her awakening, and our apprehension in one moment. I wanted the slight curl of her fingers and the parting of her lips to leave us arrested, and for me, that is what I now love the most. Now that it’s finished I often find myself staring at the picture on my laptop slightly unnerved and so in love with the details. It’s impossible to guess that the shot was taken outside in the roots of tree, or to believe it is a completely real image – something which I’m now incredibly excited by and proud of. 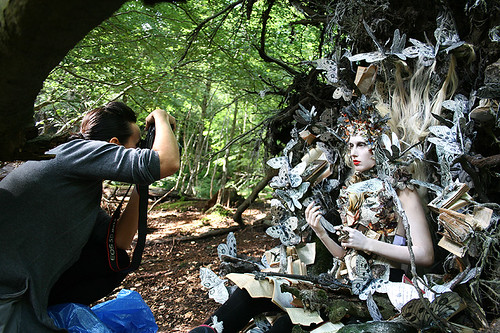 Finally I had to finish with this picture. I think it has to be one of my all time favourite behind the scenes images, it just looks so surreal its hard to believe its real life. As I said at the beginning of this post, so many people ask me why I do this, and why I spend so long on the photos …… I guess for me this answers that question in a heartbeat , and no more needs to be said.

Oh and one more snap ……. in case you missed the previous diary entries exhibition photos, here is a picture of Elbie standing next to the finished Ghost Swift picture in all its glory at 120cm wide 🙂 I honestly love this one so much, I could just stare at it all day, I’m keeping this one for my house thats for sure ! 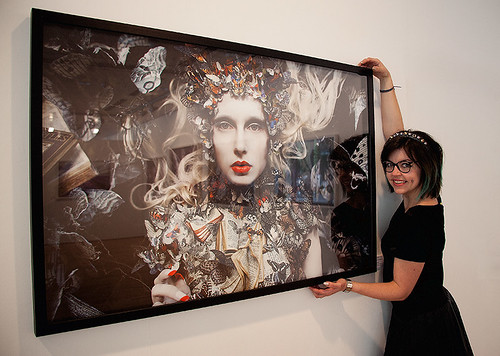