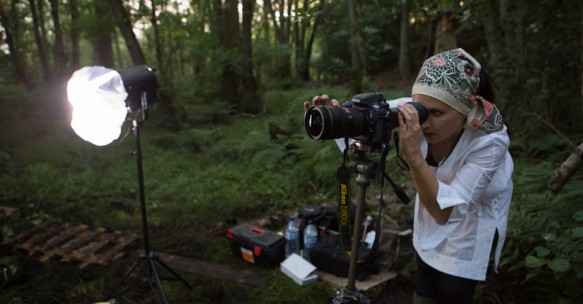 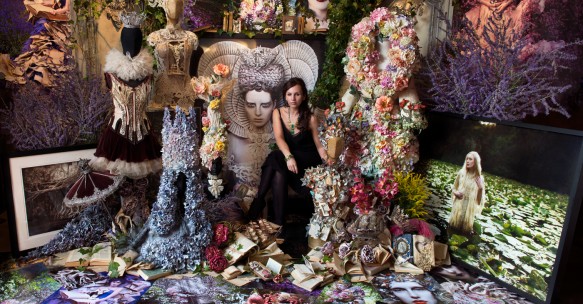 Kirsty in her studio 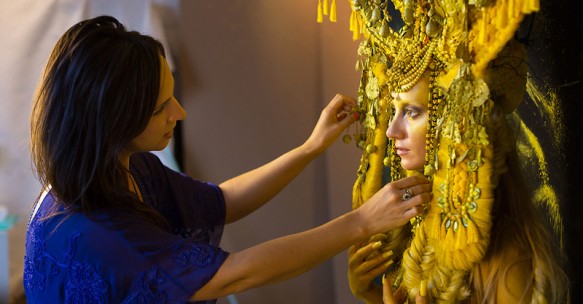 Kirsty began her higher education at the age of 16 studying fine art, photography and history of art. At 19 she specialised in “Costume for Performance” at The London College of Fashion, gaining a Higher National Diploma with Distinction. Kirsty went on to train at Ravensbourne College of Art for a further 3 years achieving a First Class Bachelor of Arts Degree with Honours in ‘Fashion Design and Textiles’ . During this time she Interned at the studios of the British Avant Garde designers Alexander Mc Queen (1999 – 2000) and Hussein Chalayan (2000-2001), she graduated in 2001 at the age of 25

Kirsty spent the next decade as a fashion designer specialising in surface decoration and fabric manipulation, learning in depth the crafts of beading and embroidery whilst spending time in India and China. During this period at the age of 32, Kirsty rediscovered her passion for photography and began a new and deeply emotional connection with the medium throughout the treatment of her mother’s terminal cancer in 2008.
Seven months after the tragic loss of her mother, Kirsty immersed herself deeper into photography to help deal with her grief; and in the summer of 2009 embarked on her now revered 5 year series entitled ‘Wonderland’ created in her mothers memory.
As the series grew, it developed a global fan base of over 400,000 followers online, resulting in the photographs achieving a viral status and mass international media coverage around the world. The acclaim for her work and escalating demands of the project led Kirsty to finally leave her fashion career behind at the end of 2011 to commit her future to the completion of the collection and producing the Wonderland book.

The Wonderland series was completed in November 2014, immediately winning 2 International awards. The project has been recognised with features by the BBC News, Vogue Italia, Vogue Portugal, Harper’s Bazaar, The British Journal of Photography, The Royal Society of Photography, CNN, The Guardian and The Telegraph newspaper to name just a few. The Wonderland series has been exhibited in gallery and museum shows in London, USA, Stockholm, Estonia, South Korea, The Palace of Milan, Spain and Amsterdam.

In December 2018, the first major museum show of the entire Wonderland series (all 74 photographs) opened at Fotografiska in Stockholm – one of the worlds most important museums of contemporary photography. It received record breaking audience numbers for the museum, becoming one of it’s most popular in it’s history.

The exhibition went on to tour Fotografiska’s sister venue in Estonia and was due to open in New York during the summer of 2020. Unfortunately the Pandemic caused the show to be delayed, the new dates are currently yet to be confirmed.

In 2019 after a year of planning, Kirsty began shooting a new series inspired by the events in her personal life between 2015- 2017, when she gave birth to her first child and 8 months later was diagnosed with breast cancer. The project is an even greater undertaking than Wonderland, as the photographs will also be accompanied by fine art films of each scene. It is expected to be several years in its creation, with the first pieces due for release in 2023. For glimpses of its progress, follow the journey on Kirsty’s Instagram.

Kirsty is now thankfully 6 years clear of her breast cancer and finally off all treatment. She lives and works in the Surrey countryside in England, with her husband Matthew and their young son Finch.

In 2015 after a number of offers from publishers, Kirsty decided to launch her own Kickstarter campaign to self publish the Wonderland book in collaboration with renowned British book designer Stuart Smith.
The project was launched on September 9th 2015 and has since become the most funded photobook campaign in crowdfunding history. It closed at almost 500% funded – a total of £334k, with backers from all over the world supporting the book. In the months that followed the Wonderland book continued to sell at record speed and the First Edition was sold out by January 2016.

Due to overwhelming public demand a Second Edition of the Wonderland Book was released in December 2016 with a new elaborate cover, custom designed by Kirsty. The Limited Edition boxed set of the First Edition was also awarded an honourable mention in the Professional Fine Art Book category at the 2016 annual International Photography Awards. The competition is judged by some of the most important gallerists and art critics in contemporary photography today. The book can be purchased through this website or Amazon UK.

The book has since continued its extraordinary success with the Third Edition released in December 2021. This edition has most recently won Silver for the ‘Fine Art Book – Professional category’ at Budapest International Foto Awards 2022.