A deeply personal journal of life behind the camera written by Kirsty.
Previous
Back to gallery
Next
30th September 2009

Wonderland – ‘Once Upon a Time’ 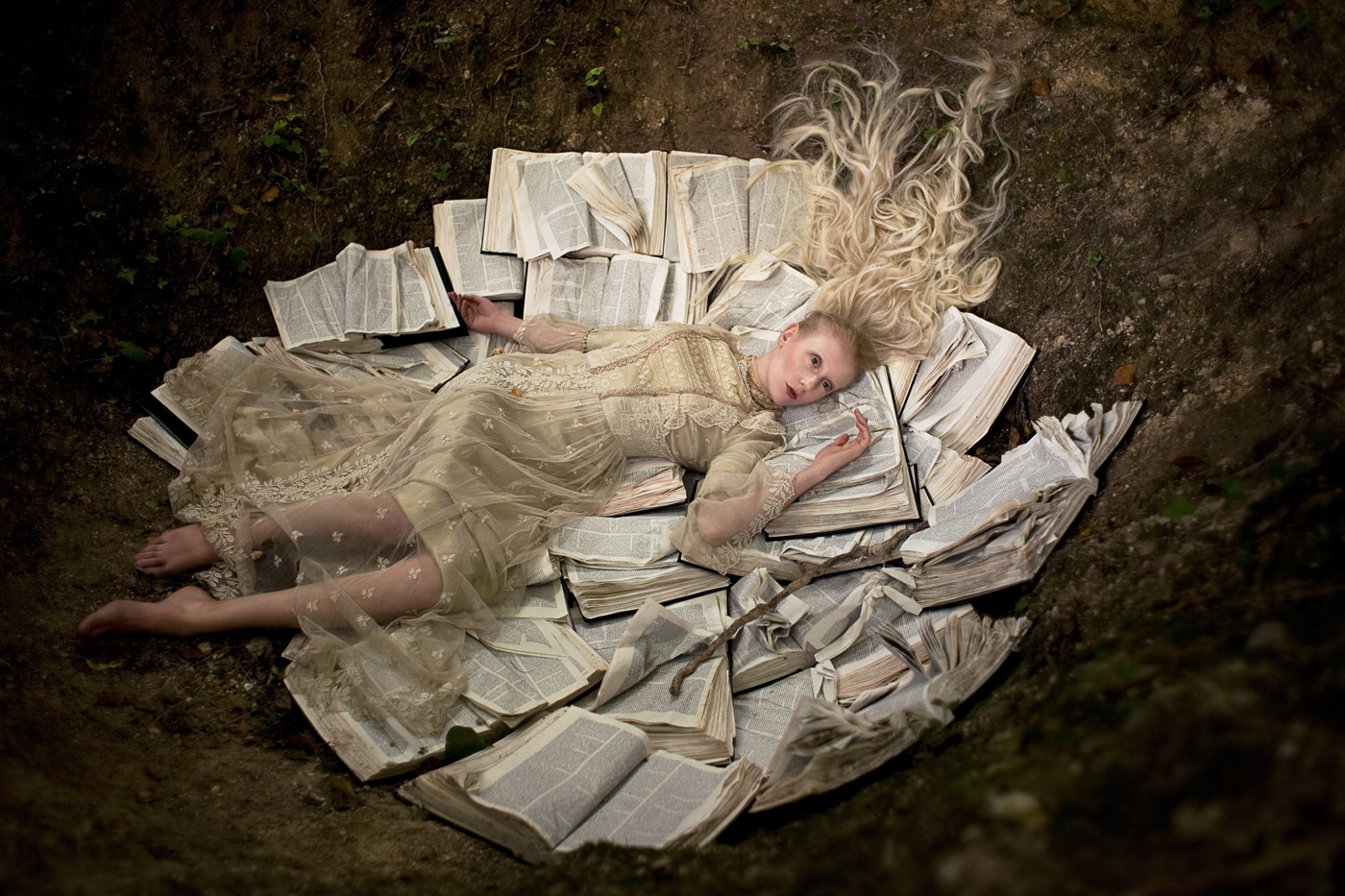 “Once upon a Time”

‘Once upon a Time’ was how it all began, It was early August, we had just started Wonderland, and Saturdays meant I would always be out researching for new locations in the woods near my home. I would spend hours wandering with my camera hunting for trees with interesting bark and twisted branches, in the hope of discovering timeless places that would fit the mood of the tales I dreamt of telling through my pictures.

That morning after leaving the normal path and climbing on to steeper ground, I came across a hidden pit like a giant bite out of the earth, just big enough for a human. I climbed in and brushed the warm soil walls with my hands, instantly feeling a lurch of excitement as an idea began to grow. I had long imagined an image of a girl surrounded by hundreds of books as an entry point to the series, but a lack of props and location meant it had never been anything I thought achievable. But as I sat on the edge of the hole, legs dangling in the sun, thoughts began to flow and I found myself rushing home to draw frantic sketches of a girl with white Rapunzel hair, asleep on a bed of stories.

I wracked my brains for how we could find enough books, when I remembered a local donations website I had joined in the hope of gathering scraps for props. By strange coincidence on that very day I came across a woman giving away her entire encyclopedia collection, and 4 hours later I was driving home with a car packed full of 70 beautiful leather bound books! I feel terrible admitting this, but in order for the books to appear aged, I spent the next two weeks soaking each one in buckets of tea and coffee and laying them out in my garden to be dried by the sun. The process took forever, every night they had to be packed away, and every morning before work I laid them out again in the garden. I would spray them down with a hose, crush their pages with my hands until it looked like they had been read a thousand times until they eventually reached their perfect state.

By mid August we were ready, and set off for the shoot in the afternoon sun. It was the first time I had ever photographed Katie. Elbie helped her into the old lace dress, whilst Matt and I started throwing the books into the pit with great whoops of joy. There is something strangely liberating about throwing books, its the type of thing you’d never be allowed to do as a child. We all had a go, laughing as we hurled them with great satisfying whacks and slaps onto the growing pile beneath us.  Katie must have thought we were mad, but by the time Matt lowered her into positon it felt like we’d all known each other for years and our sides ached from the giggles of doing something so silly.
Finally, as Katie stretched out into her pose and I stood behind the lens, I can’t quite explain how it felt. We found ourselves standing in a real fairy tale, one which we had entirely created by ourselves. All around was so quiet, just the occasional echo of bird song mixed with the rush of the stream that flowed beside us, hidden by the trees. Golden mid summer light fell through the branches and across Katie’s motionless body, as she lay silent, like a broken doll on her bed of crumpled pages. At first I hesitated, just staring at what we had done, unable to connect this feeling to anything I had experienced before. Then I began taking the pictures, letting out the odd little gasp of wonder.

The minutes passed until half an hour later it was over and that light was gone. Elbie and I began jumping up and down hugging each other with wild excited eyes. We pulled Katie from the pit and began dragging our equipment back through the woods triumphantly shouting and singing. Katie stumbled behind still in the long dress, whilst Matt struggled to keep up, pulling the books in a home made trolley he’d made from our old wheelie bin. We had no choice but to rush, as there was one more location to shoot before the sun went down and time was running out.

Looking back I will always remember driving away that day. Everyone was sitting in the front excitedly chatting, whilst I was sat behind balanced on top of the books and the step ladder. As we pulled out onto the road, the trees disappeared from view and the sky filled the back window. The low sun filtered through the clouds and I looked up and thought of mum, It had all been such glorious, happy, chaos……. I’d never felt like this, it was a strange mx of achievement, wonder and joy, but above all I suddenly felt so very much alive. It had been a good day, a great day in fact. That wasn’t something I was used to thinking much anymore, and a warmth spread through me as I looked back at my new friends, and held my camera tight in my hands…….. 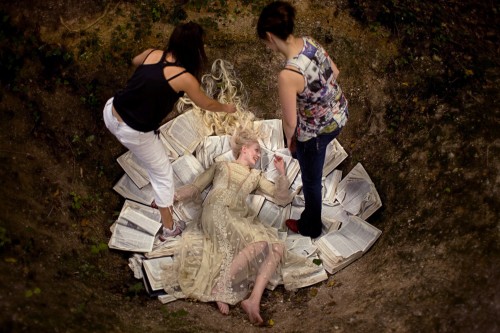