A deeply personal journal of life behind the camera written by Kirsty.
Previous
Back to gallery
Next
8th January 2013 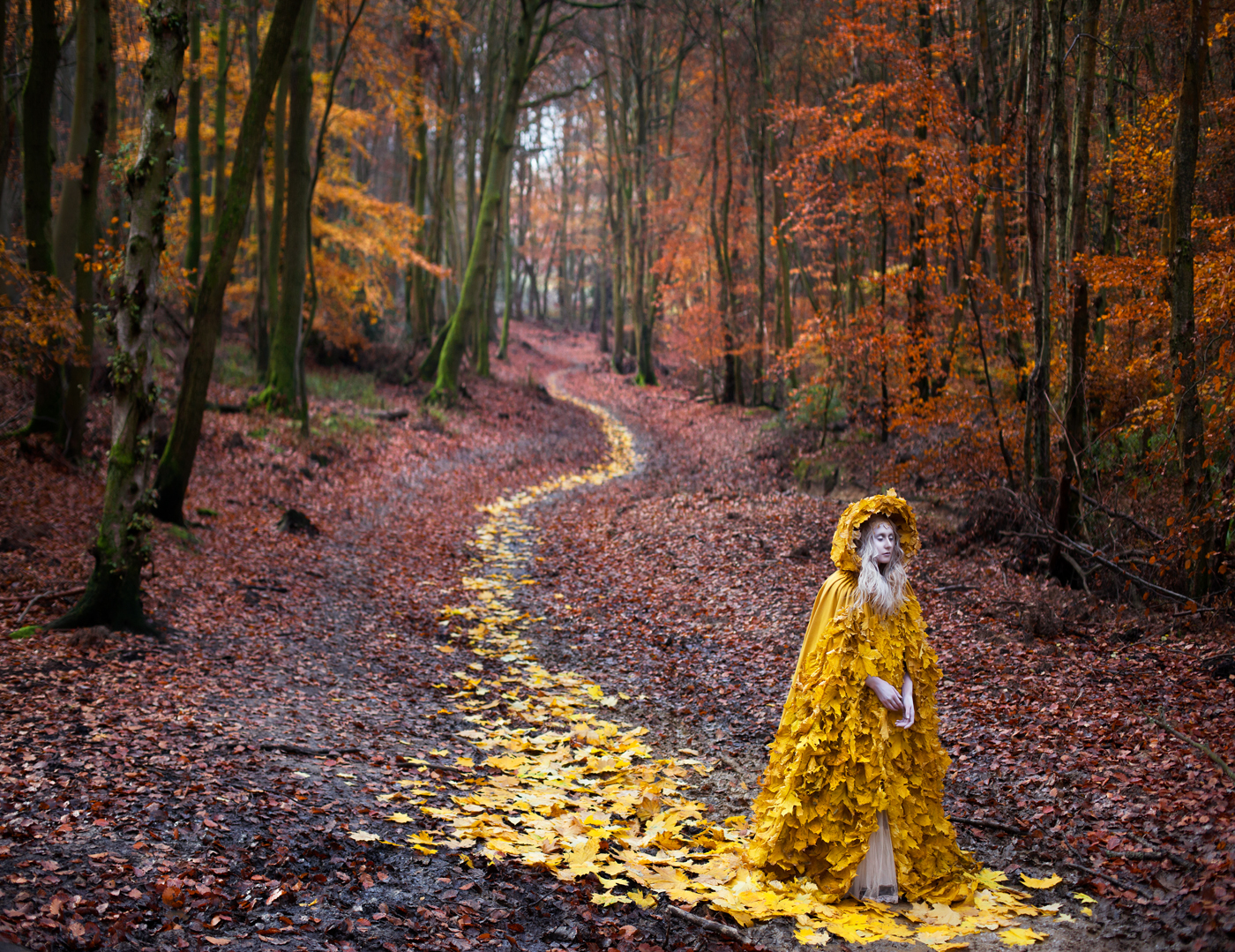 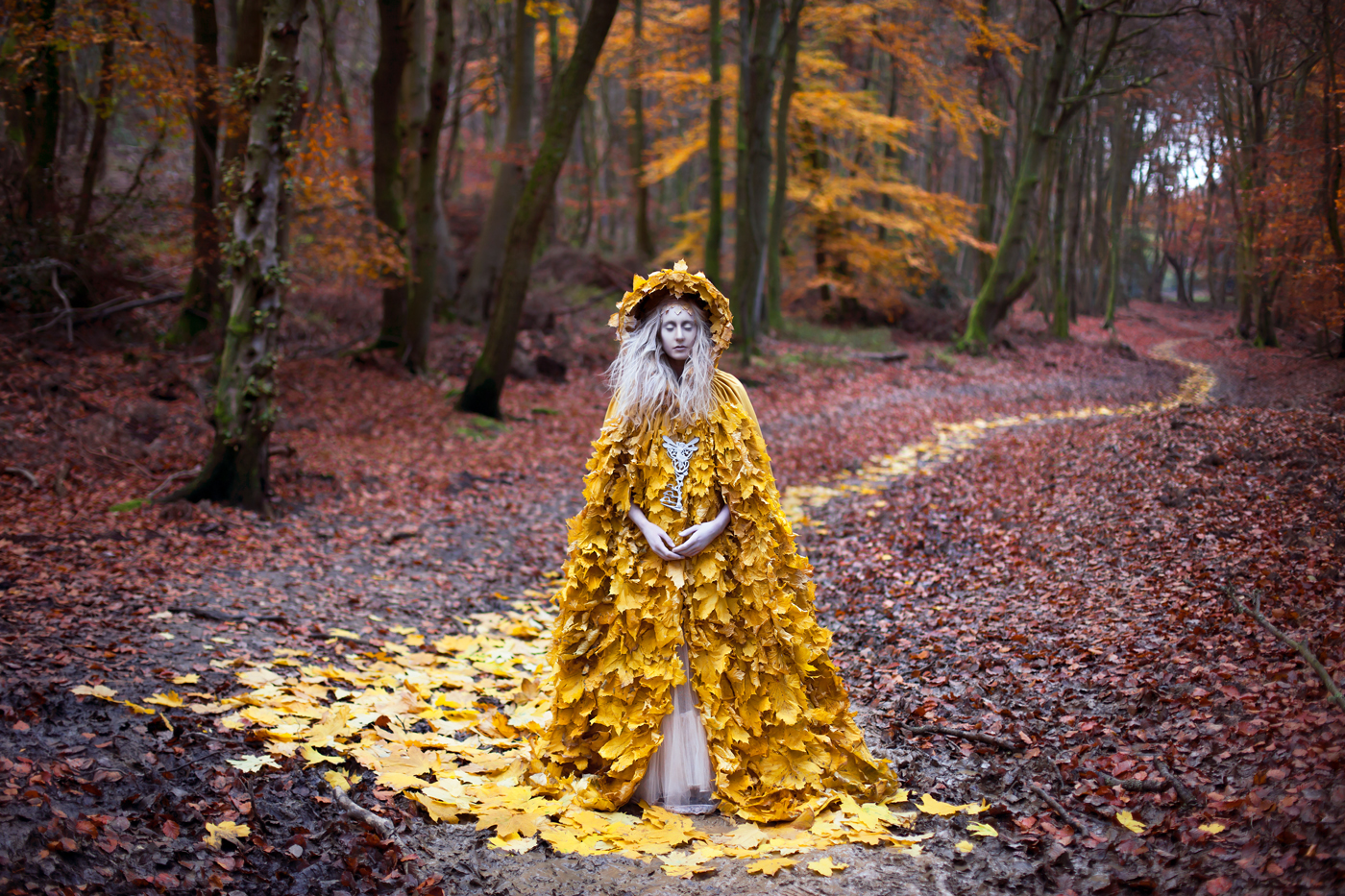 ‘The Guidance of Stray Souls 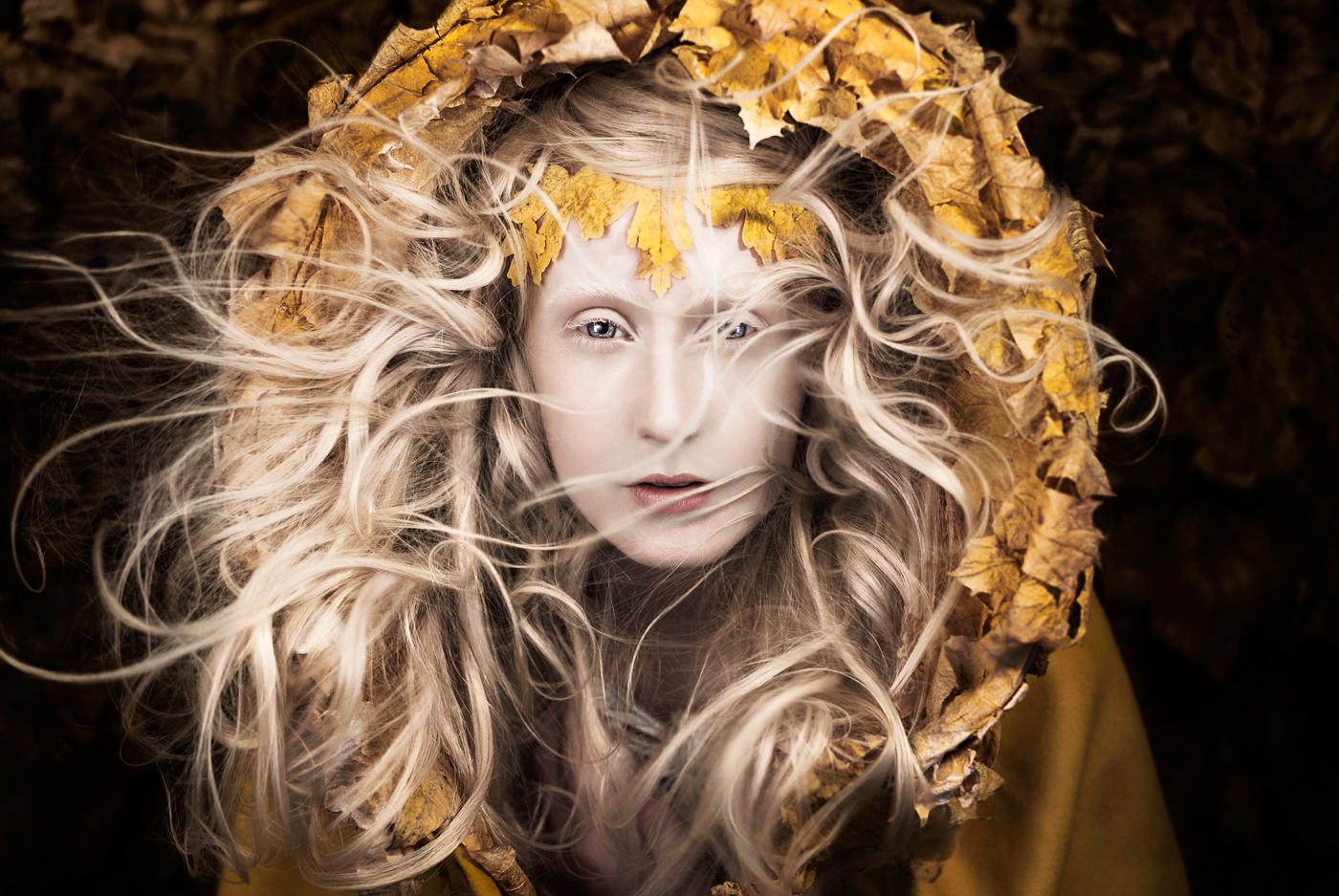 ‘Let Your Heart Be The Map’

I have re-written the start to this diary entry so many times, that I am just going to give up on trying to introduce these pictures in any proper way. Instead I need to begin from the heart, because it is what feels the most natural for a set of images that have brought me so much happiness.

Recently I gave a talk at my current exhibition in London, and realised afterwards that every picture I had described as being deeply emotional for me had not been taken this year. That night on the train home, staring out into the darkness I wondered if I had lost my way from the origins of the project and the human connection that lies at the root of all I try to do. I love the pictures I have produced, but the shoots have definitely become larger more complicated productions and as a result at times have been more stressful. The last few months had been relentless, I felt I needed to let go, to breathe and be outside in the landscape. Maybe I needed to be reminded of who I had been in those first early days in 2009 when nothing else mattered, just the moment, the light, and the dreams I so desperately wanted to create.

Writing this now, I am so grateful to say that everything I thought I had lost was returned the day I took these pictures. The emotion I have for them is so strong it’s strange, it feels like they came to me just at the point when I needed them the most. They are my comfort, based at the heart of all the things I care about the most –  nature at its most extraordinary, precious friends and the bond I have with the woodlands. The set up was stripped of complicated props and detailed costumes it was simply about Katie, quiet in the early morning cocoon of the trees and the emotion she conveyed. The pictures carry so much weight for me as they are the start of Katie’s (and my own) journey home. I am now three and a half years into creating this series, and it has taken all I can physically and mentally give. I never imagined the project would take this long, or that my life would have become what it has. Without realizing it at first, over time Katie has become my mirror, it is hard to explain but her pictures always underpin where I am in the real world. I always thought I was burying my reality in the process of creating the photos, but as the months have passed I realized they were simply reflecting back everything I was feeling. This connection I have with her drives everything and is something I have finally embraced. I see her experiences as a parallel to mine, and now my focus is to lead us to a place where I hope I can find some closure – an ending, and maybe a new beginning in the same moment. 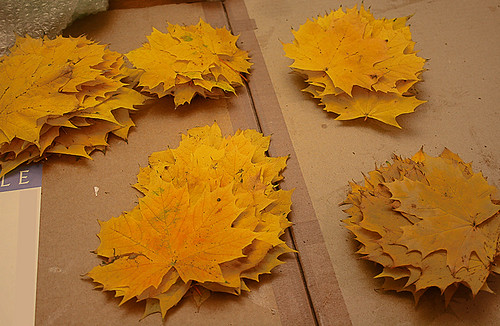 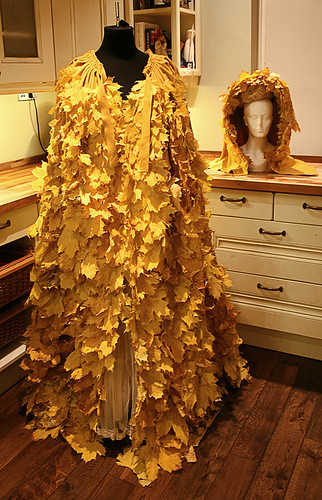 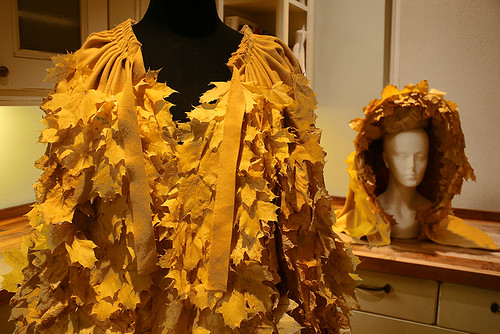 Since the first few months of starting this series, I had always said my wish was to record every colour nature had to offer. Each year I made a point of trying to be ready for the seasonal highlights but it was not always possible whilst working on so many shoots. Like the fields of flowers, I found the vivid Autumn leaves would appear and disappear all too soon, and I came to learn that their high point of the perfect red and yellow was just as fleeting. It was now November and the leaves were turning and falling once more. It was one of those dawns where the low winter sun sets the colour of the trees along the road on fire, and I knew deep inside I probably had less than a week to find a location and make a costume. The colour yellow is highly significant to the story, just as in earlier scenes where red had led the characters along a new path, yellow would now do the same – so there was no compromise to be found. I spent two solid days in search of a yellow wood, I visited every place I could think of. I walked until I was lost and spent hours driving, chasing distant coloured trees on the horizon, all resulting in nothing more than a mirage when I reached them. It was only on the third day as I stood defeated staring up at the most beautiful red trees wishing they were yellow, that I realized my mistake. All this time I had wanted the picture to be completely yellow, with the focus being entirely Katie alone on her journey. I pulled a crumpled yellow leaf from my pocket, and let it fall on the crushed red skeletons that had collected at my feet. The contrast in colour was so powerful it suddenly dawned on me that I could use this combination to single Katie out as a shining energy in the landscape. All along I had been searching for the wrong backdrop, when it was actually a red wood that would bring the picture to life. I looked around with fresh eyes and started photographing my tracks, walking deeper into the trees. At the foot of the wood I turned back to be faced with a long winding path that melted over the horizon, it was utterly perfect and despite feeling a little ridiculous for not realizing the situation sooner, at last the location was set.

I fixed the shoot for in two days time, which meant I had just 48 hours to pull together a costume. I spent the morning clambering around in the grounds of my local hospital’s garden where I had discovered the purest yellow leaves I could find. The ground was thick with them, but the best remained on the trees.  So I jumped and tugged and huffed and puffed, clambering around the branches, filling bursting bin bags praying no one from my street would recognise me. I worked relentlessly to create Katie’s golden cloak of leaves. It had to be one of the simplest costumes I have ever made, but actually by far one of the most beautiful. It took 3 trips to the gardens and two days of relentless gluing, but as I sat exhausted on my kitchen floor the night before the shoot covered in insects, I was thrilled with the finished piece, it was completely worth it

Preparing Katie’s hair, the hood needed to sit high on her head so Elbie had to pad out a shape to support it.

Me and Elbie making Katie’s trail of leaves

The following morning we set out as early as we could. It was just the four of us, the original gang from the very first pictures back in 2009. I sat in the van staring out the window, clutching my precious hood made of leaves, while the step ladder and equipment jangled and shook in the back. Arriving at the location it felt so good to only unpack a few basic things as we marched off into the wet mud, carrying the giant yellow leaf cloak between us.

I rarely shoot two pictures that look similar, but in this case there is a deliberate transition across the three frames I have chosen to portray for this part of the story.  I imagined them as cinematic film stills of Katie’s journey, and intended them to express the physical aspect of her traveling towards us. That is why the first was framed from a distance with the emphasis on the landscape and the direction of her path. Throughout the series I often use trails of flowers, coloured powder or in this case leaves as way of depicting motion within a single frame.  The sequence was intended as Katie hurrying away from the Centurion after taking the precious Queen’s key. I choose to make a cloak instead of a dress, as I imagined it as her attempt to pass through the woods unseen under it’s protection. But like all good fairy tales I wanted her light to shine through the disguise, betraying her with a shimmering path of golden yellow left in her wake. A symbol of a pure soul I suppose is the only way I can explain what I was trying to portray. 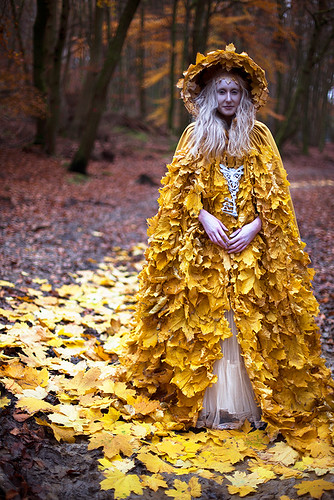 For the second shot I brought the camera in closer, framing Katie in a dream-like state with the Queen’s key around her neck. I wanted it to be seen as guiding her as much as she was protecting it. I imagined her sleepwalking as though under a heavy spell, moving forward yet unconscious of her surroundings. I love the solitude of the picture and how lost and alone she seems; yet by the very nature of her clothes she will always be a part of the woods. This is how I have always felt since losing mum, the woods are the only place where I can feel calm and pull myself together on the bad days, when I miss her the most. In short, I wanted this second picture to be a moment of quiet contemplation before the final awakening of Katie’s close up.

Personally it is the final picture ‘Let Your Heart be the Map’ that now means the most to me. There were so many times during editing, that I found myself lost in the moment with my eyes full of tears. It is hard to put into words, but I saw it as a picture of Katie and myself both in the same moment. Sometimes staring at my monitor I felt like I was looking in a mirror, with each of us on opposite sides of the glass. Wonderland has always been my escape, I have spent it’s duration hiding from reality in my imaginary world in order to block out losing my mother, and some days I have sunk so deep into it’s story that the real world was completely out of reach. It was what I needed, it was what I wanted, and as Katie experienced the different places and characters so did I, but like all things time has moved on. I have begun to need my family and friends and maybe after working so hard for so long, it is time for me to turn back and return to the surface.
So as my life is echoed through Katie, this picture is like the first breath above the surface for both of us. It is the remembrance of home, the spell is breaking, her eyes are open and the breeze through her hair is calling for her return. It is a milestone picture in the series and there is a reason why the light is so strong on her face….. someone is coming to guide her back, and with them they will bring a change to the current darkness of Wonderland.
So finally, yellow why is yellow important you might be thinking? Well maybe if you click your heels together and close your eyes, you’ll remember it can only mean one thing…that ‘There’s No Place Like Home’.

Finally  (I just couldn’t help myself). I had to share this behind the scenes picture of Katie, it makes me laugh so much. Sorry to shatter the mood of the pictures, but theres really nothing funnier that an extraordinary crisp-eating leaf creature deep in the woods to make you go home smiling 🙂 !!