A deeply personal journal of life behind the camera written by Kirsty.
Previous
Back to gallery
Next
26th November 2015 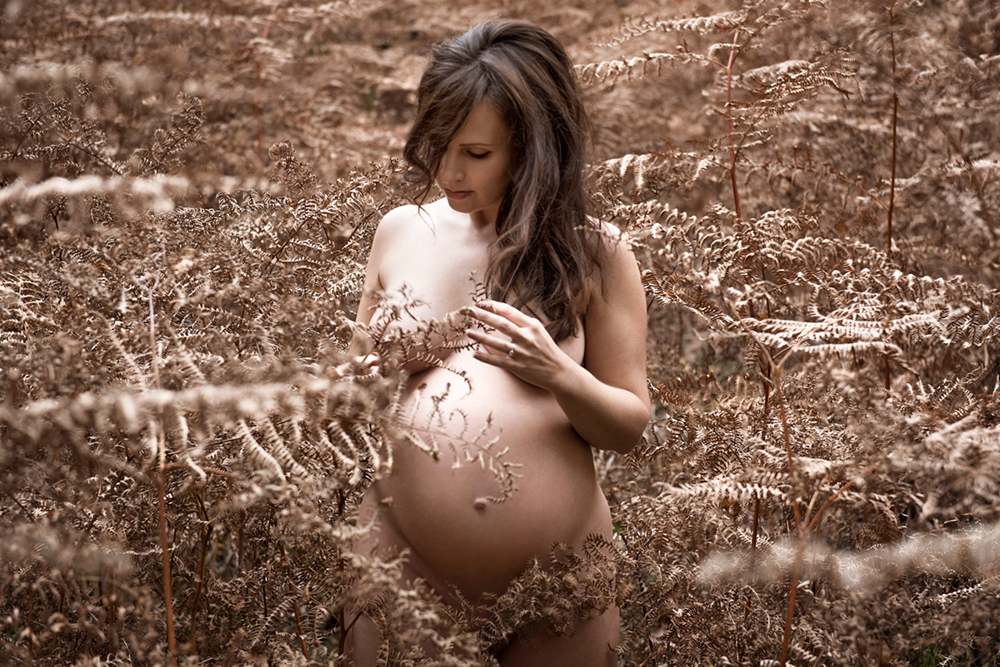 It was April when I woke and knew something had changed. I lay in bed and felt it in every inch of my body. It was impossible to explain – there were no signs, no sickness, I just knew. It was two weeks till my new solo show opened in London on my 39th birthday and a handful of days since I’d returned from the chaos of lecturing on Wonderland for Nikon in the UK and the Netherlands. I had been living life at a hundred miles an hour, was stressed beyond words and suddenly a strange awareness crept through me as I sat in the kitchen and ate my breakfast in silence …. hand on stomach.

I walked around the house in the early morning light, a voice in my head repeated the words ‘I’m pregnant’ over and over as I paced the floor. My eyes settled on the one faded photo I have of my mother on the mantelpiece and deep down in my heart I knew it was true.
Two hours later my husband Matt and I sat nervously counting the months on our fingers, a positive pregnancy test lay between us on the table. Still stunned we made mistakes about the dates ‘February, no January’… then suddenly …. ‘December’ he said slowly as our eyes widened knowing full well what it meant.  Two days later it was confirmed, our first child, my beautiful unexpected little boy would be delivered at the same time as the Wonderland book – the timing was beyond belief. After 6 years of producing the series, in the very same moment that I would say goodbye to my mother, I would become one myself – a full circle of life, loss and love completed. I couldn’t have made it up if I’d tried.

Back then, to be honest nothing felt real, the London show opened and as usual my life was turned upside down as I rushed between interviews, meetings and even two live television appearances. I made nervous jokes to avoid the offers of wine at my gallery private view and constantly questioned myself over whether it was all just my imagination. It was only when a few days later, after the blood had appeared that reality sunk in and we found ourselves in the hospital holding hands trying not to cry. I was called into the small dark room and asked to lie down and be still, they said they would switch off the monitors and the sound so I wouldn’t have to see the baby which by this point I was so sure I had lost.
I lay on the hard bed and thought of mum, desperate to leave and convinced of the inevitable looming news. But then the sudden echo of a heart beat rang out as the the sonographer laughed exclaiming ‘my goodness you have a strong little one here’! The overhead monitors were switched on and as my eyes adjusted, I blinked at the screen in disbelief – there he was, my tiny 8 week old blip, clinging on with the heart of an ox, booming in my ears. 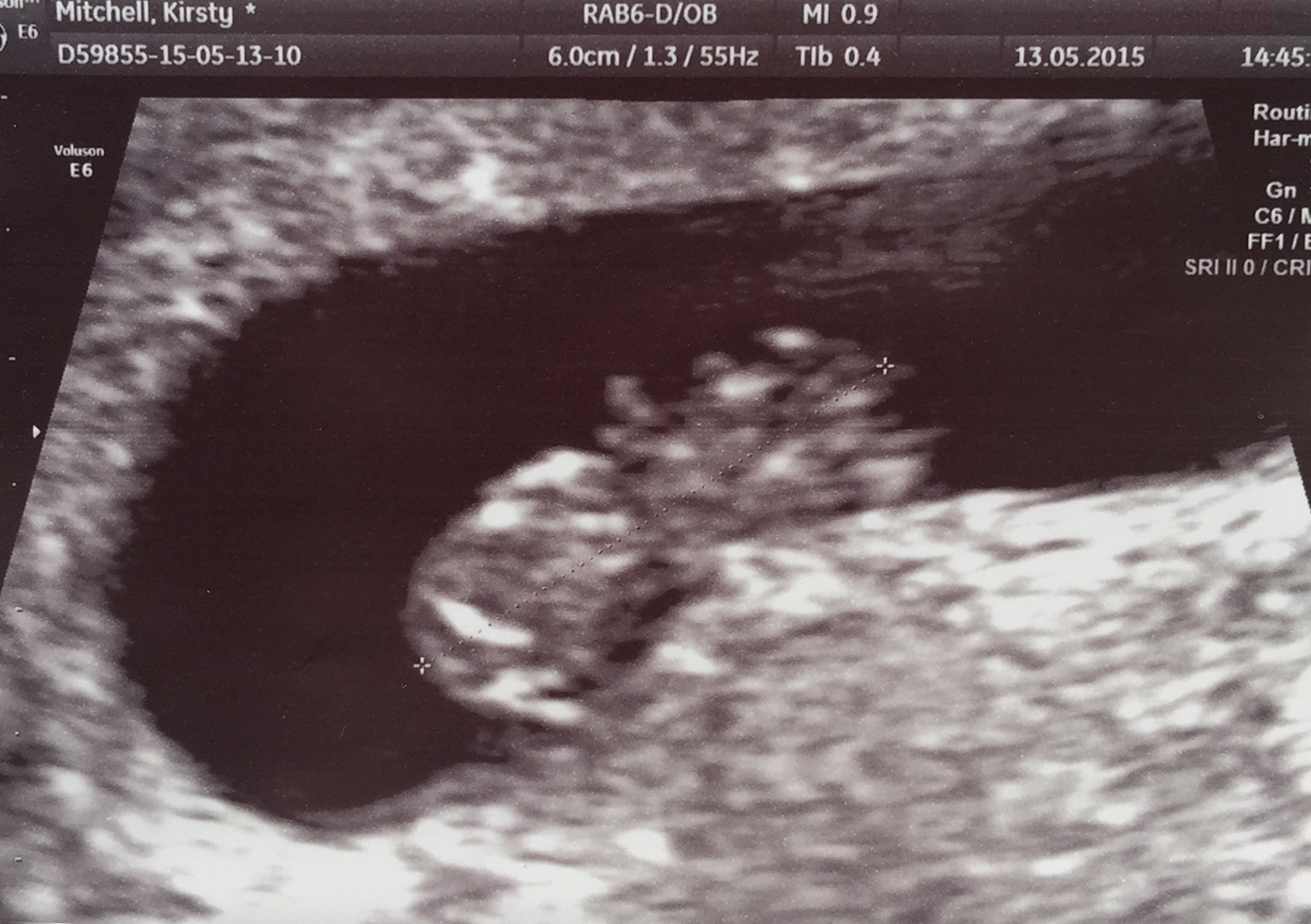 So the weeks passed and our little secret bloomed. After all that had happened I choose to keep him quiet and precious. It is hard to explain why, I never expected this to be my reaction, but in a world where every moment is shared, posted, tweeted, photographed and publicly announced, I suddenly felt the need for the opposite. As we walked in the woods over the summer Matt and I would sit on the hills and take little personal pictures, talk about how unprepared and amazed we were, how life would change and what would we call him… it just felt right. 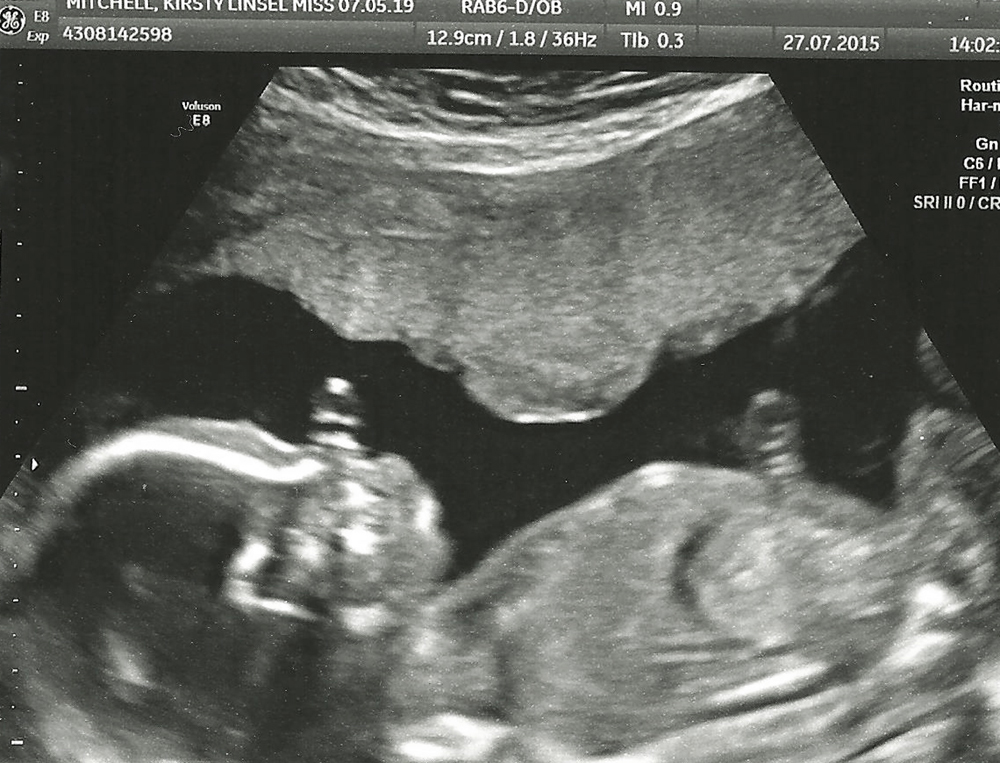 After the London show closed, work on the Wonderland book began in earnest and life once again gathered speed at an alarming rate. The weeks turned into months as I worked around the clock preparing all the material and had meetings with our designer Stuart in London. Time slipped by as my body changed and swelled and suddenly deadlines became frighteningly real. By August the pressure was immense as we filmed the Kickstarter campaign and I hid my bump under papers and pictures. I decided I didn’t want to detract from the fact that the book was for my mother and that instead I would tell people my happy news once the dust had settled and the campaign was launched.

But life didn’t go to plan as the Kickstarter exploded beyond anything I could have ever imagined. My expectations of things calming down instead went into warp-speed as the campaign hit record breaking levels and the press picked up the story. Our plans of making 1000 books were smashed as the total rose to 4000 and with it came the responsibility of worldwide freight and a major publishing challenge. It was thrilling, exhausting and utterly overwhelming……

Each week my midwife would visit and each week I would apologise I hadn’t read the latest book she had given me. The few people who knew kept telling me to rest, but we were now on a runaway train that could not be stopped, the book and baby were the same deadline and neither could wait. So we carried on until finally October arrived and I found myself on a plane to Italy at 33 weeks pregnant, for one of the hardest weeks of my working life. 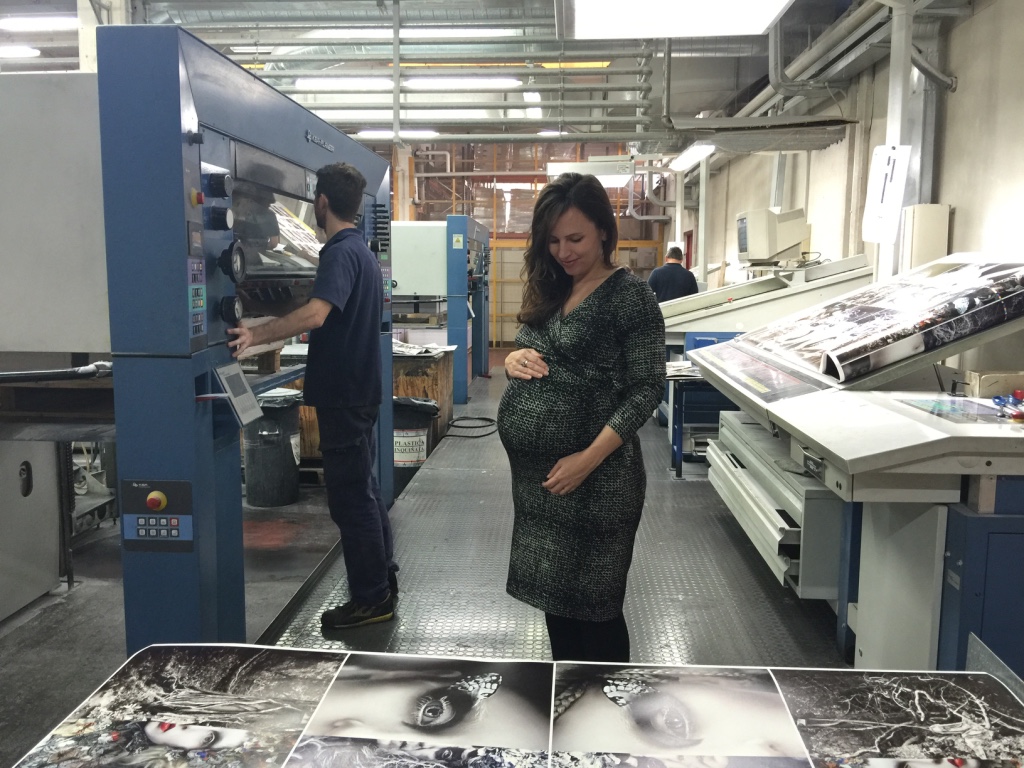 Everyone had been so worried about how I would cope in the factory, but after years of the book being a constant dream nothing was going to stop me giving everything I physically had while I was there. ‘Pregnant powerhouse’ became my pet name for the week as I waddled around the factory pushing everyone to their limits, testing and re-testing images, working from 8am – 3am on the production checks. We even set up a blow up bed on the floor of the factory office so I could take rests when needed, but mostly the hours just flew by with each new challenge. The factory workers pointed at my stomach with concerned bulging eyes asking ‘how long’ ? ‘When is baby coming?!!”. In restaurants people stared and my designer constantly asked ‘why wasn’t I tired ?’, when it was 1am and he was burnt out from the days work.

So now it is November 26th, I am 37.5 weeks pregnant and this morning a birthing pool was delivered by my midwife for the home birth I have set my hopes on. Since losing mum hospitals frighten me, I do not see them as places of reassurance, they fill me with bad memories and mistrust. So I wanted to make this experience as comfortable and personal as possible, surrounded by the people I love where I feel my happiest.
I never imagined how hard this year would be, the experience of living these two huge moments in my life in parallel has been beyond anything I have ever experienced before. I knew the book would be tough and I had no romantic preconceptions about pregnancy either –  I knew it would be extremely demanding. But the combination of the two has been unlike anything I could have predicted. I felt I had reached my limit in August, so to keep on relentlessly pushing, to keep working, to carry on for so long knowing there simply wasn’t any opportunity to stop in all this time has been incredibly hard. But as I write these words I cannot help but marvel as my stomach stretches and shifts under my laptop as my little boy wakes inside of me and everything suddenly has new meaning and worth.

In all honesty I never knew if I would be able to make the Wonderland book a reality and for a few years I had secretly worried if I’d left becoming a mother too late in life. After I lost mum at the age of 32 life’s big decisions seemed so impossible without her around to share in them, that I guess I blocked them out. The years slipped by and maybe I was in denial I’m not sure, but then in this one unexpected moment two dreams have fused and I’ve found myself on a path a year ago I couldn’t have imagined.

In less than 3 weeks my son will be in my arms and the book will be delivered into the hands of so many of you all over the world. I will admit I am completely unprepared, I wish my days were filled with knitting baby booties in a freshly painted nursery –  instead of the pile of unopened boxes of baby equipment and donations of sleep suits from sympathetic friends that currently fill my spare room. But as I look at the rough bound copy of the Wonderland book that sits beside my bed, I know this is who I truly am.
When I need confidence in the sacrifices I have had to make, I sit and turn the pages and read the words of the diary to my bump – 6 years of friendship, chaos, blood, sweat and tears. I imagine how it will be when I am able to show my little boy all the crazy things his silly mummy went through to take her pictures. How he’ll laugh at the behind the scenes photos the way I do now, and when he is older how he will read the words I wrote about him on the very last page –  whilst he still grew inside of me.

The photo I started this entry with I have called ‘Full Circle’ – it is just a simple moment, not the grander image I had originally hoped to make. It was taken a handful full of hours before we had to rush to Italy when I was 33 weeks pregnant. It is the first proper self portrait I have taken of myself since before my mother passed away. Since losing her I am now a much more private person, nervous of my body and appearance  –  a far cry from the girl who began her photography career by taking self portraits on Flickr all those years ago. If it wasn’t for the book I doubt I would have forced myself to drive to the woods that cold October afternoon – but I knew I would regret it forever if I didn’t capture this one extraordinary moment in my life. The day I saw the photo printed in the factory I cried, it was perfect – the last page of the book, an ending and a new beginning all in one moment.

So finally here I am, ready to close the book, to breathe and to focus on love instead of work for a little while. I am so excited for the next chapter, not only to experience a completely different stage in my life but to also at last find some balance. I am ready to let go and look forward to new adventures, to create new photographic work with a happy light heart knowing that I have at long last achieved my promise to myself and my mothers memory.
Once he is here, I will hold my little boy to my chest and walk him through the woods. I’ll show him the flowers, the lakes, the places I love so dearly and tell him all about his special grandmother Maureen whom he’ll never meet – but who now watches over us both…..