A deeply personal journal of life behind the camera written by Kirsty.
Previous
Back to gallery
Next
9th April 2015

The last time I wrote in this diary I was a mix of emotion, exhaustion and anticipation for what 2015 would bring, and to be honest I was overwhelmed by the enormity of the next steps I needed to take. As previously explained my focus for the coming months would be facing the mountain of the Wonderland book, and also bringing the series out of the computer into the real world – which meant exhibiting it in the way I always hoped it would be. Right now I could write an essay about how hard it is to speak with top line galleries, it takes years and in many cases it may never happen. You simply cannot just send work to them and get a response, you can’t email, it’s an invisible wall that is very rarely broken through unless there are contacts, agents , people who can open that door.
Everything that has happened for Wonderland I have achieved myself from the ground up, people are astonished when they learn I don’t have an agent, or a press company considering the level of media attention the series has gained. I have had to handle all the promotion, whilst trying to deal with both the business and creative side too. It’s been hard relentless work, and no matter how beautiful everyone says the pictures are, I needed to find a way to put the project in front of the people who can help it grow beyond my own capabilities. Something that has been my goal for a very long time…… 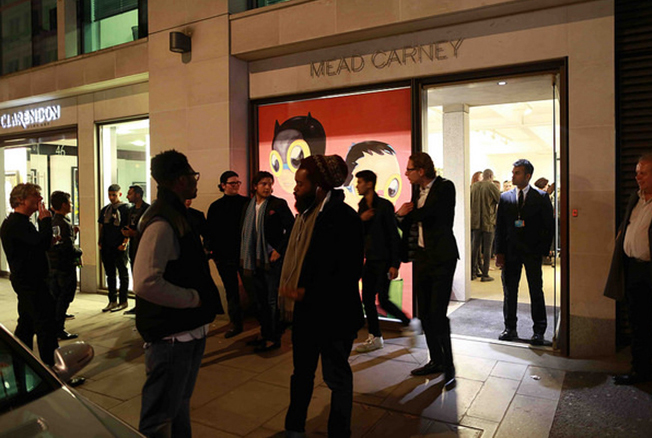 This is why, what I am about to write will be some of the happiest news I have ever written in these pages …… I have officially been signed by Mead Carney of London, Mayfair.
Mead Carney are a top line gallery who handle the work of artists such as Damien Hirst, Bill Viola, Richard Long, as well as cutting edge street artists Like Hijack, Banksy and Goldie. As well as the gallery they are also an advisory for collectors around the world offering extensive experience in all categories of North American and European fine art including Old Masters, Impressionist, Modern & Contemporary art.
It is truly quite surreal and hard to explain what this means to me. 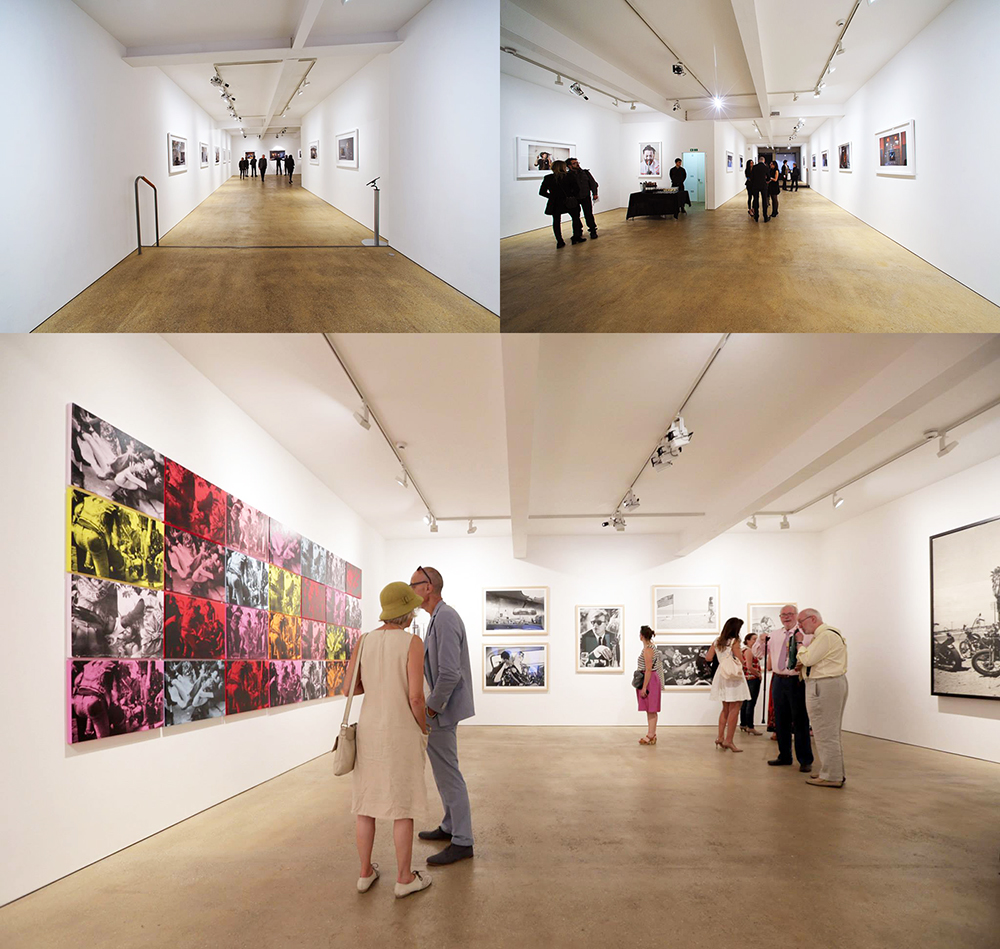 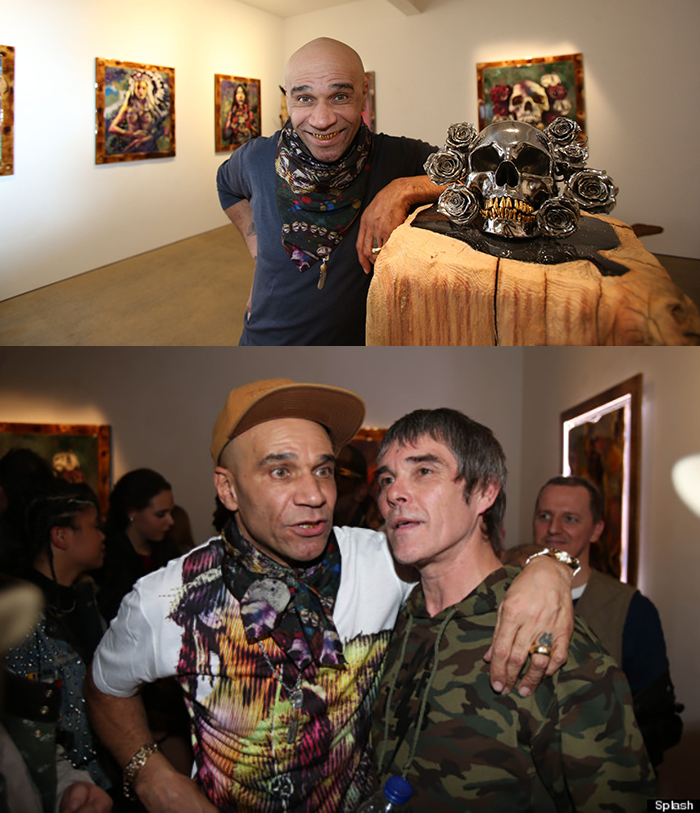 My introduction began back in February through a random chain of events and a passing conversation between two people I barely knew. A week later I found myself sitting on the train to London, clutching my Wonderland print book completely wired after just 3 hours sleep. I was about to meet the gallery owner Nigel Mead at the prestigious Arts Club in Mayfair, to explain the series in person. Anyone who knows me in real life understands how passionate I am about the project, but also how important it is for me to work with people who connect with the emotional level in my work. This is the hard part, the unknown – would I be seen a just another new artist, and would anyone really care about what was behind my work? I knew the meeting would be quick because the gallery were opening a new show that day, with a private view in the evening so I would be the least of their worries, or so I thought ……. 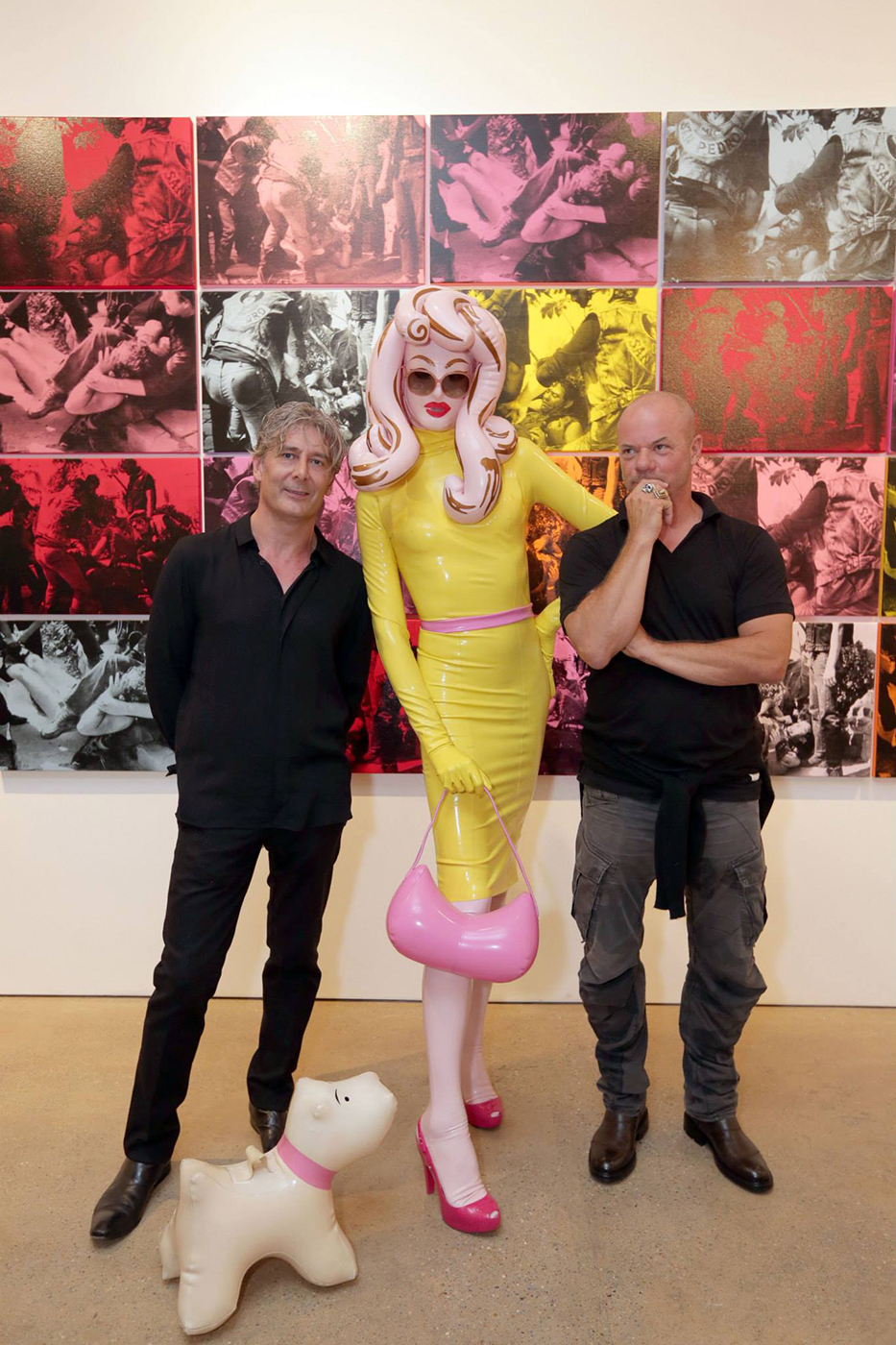 The owner of the gallery, Nigel Mead (above left)

I arrived and was seated outside at a table with Nigel in the gardens under a canopy, he lit a cigarette and let me begin. I opened my book, took a deep breath, and slowly as I spoke all my preconceptions melted away with every minute that passed unnoticed……
We spoke for 3 hours, by the end he was finishing my sentences. I can safety say no one I have ever met outside of my family has listened to me in the way he did that day. At times I felt I should round up the conversation and give him an opportunity to leave, but instead he would turn the page and ask more questions about the next picture, then the next. I stopped worrying about how tired I was, or how much time I was taking up, and carried on explaining the layers, the stories within stories. Nigel even knew some of the original old books that were my inspirations, and finally towards the end of our chat another connection was made, which is not for me to say but suddenly everything made sense and there was a tangible shared empathy…..
The meeting had started with a brisk handshake and ended with a hug goodbye, I just couldn’t believe what had happened. I left a little dazed, not only had I been given 3 hours by an incredibly important gallery, I genuinely felt taken seriously as an artist, and beneath all the business side I had met a person who I felt was on completely the same page as me. My face ached from smiling as I headed to the station, I had enjoyed every minute and relished his questions, he understood…..

On the train home I hugged the print book to my chest and stared out the window thinking about how many years it had taken to reach this point. All the late nights, the worry and stress of giving up my fashion career. The financial sacrifices I had made, the endless letter writing, entering competitions, always pushing, pushing, pushing, to bring the series to the level I believed it should and could be. I remembered the days I had caught that same train to work years before, dreaming of leaving my job and having no idea how I could ever make that leap, and then what the hell would happen to me after I did.? Now, here I was on those same seats 5 years later, the project complete and another new step taken…….

I arrived home, went up to my bedroom called my dad and Elbie and  fell asleep in my clothes, I was completely drained, but so happy and relieved……
3 weeks passed, and on March 12th an email arrived in my inbox. It was Nigel, he told me had moved his exhibitions around to give me a solo show in May, starting one day before my birthday. The show would overlap with ART 15, and Photo London, two of the art calendars hi-lights for the city this summer. I couldn’t believe it, a solo show so soon and at such an important time., it was far more than I ever could have imagined.

So this is my wonderful news, to add to the excitement I am also thrilled to say that Nikon UK will be acting as my offical sponsor for the London show. This will give me the chance to showcase some of the largest pieces in the Wonderland collection, including favourites such as ‘Gaia, The Birth of an End’ at an enormous 2 meters high.
I will be posting more updates about the show on my facebook page as the weeks progress, but for now the offical show details are as follows –

As always I have so many other things to write. I have just returned to the UK from a week long tour of lectures about Wonderland with Nikon, as well as the fact I know need to update you all on the Wonderland book . So I will write a second post soon, but for now I just wanted to share with you this new wonderful news about the show, I’m utterly thrilled and I dearly hope some of you will be able to come !