A deeply personal journal of life behind the camera written by Kirsty.
Previous
Back to gallery
Next
11th December 2014 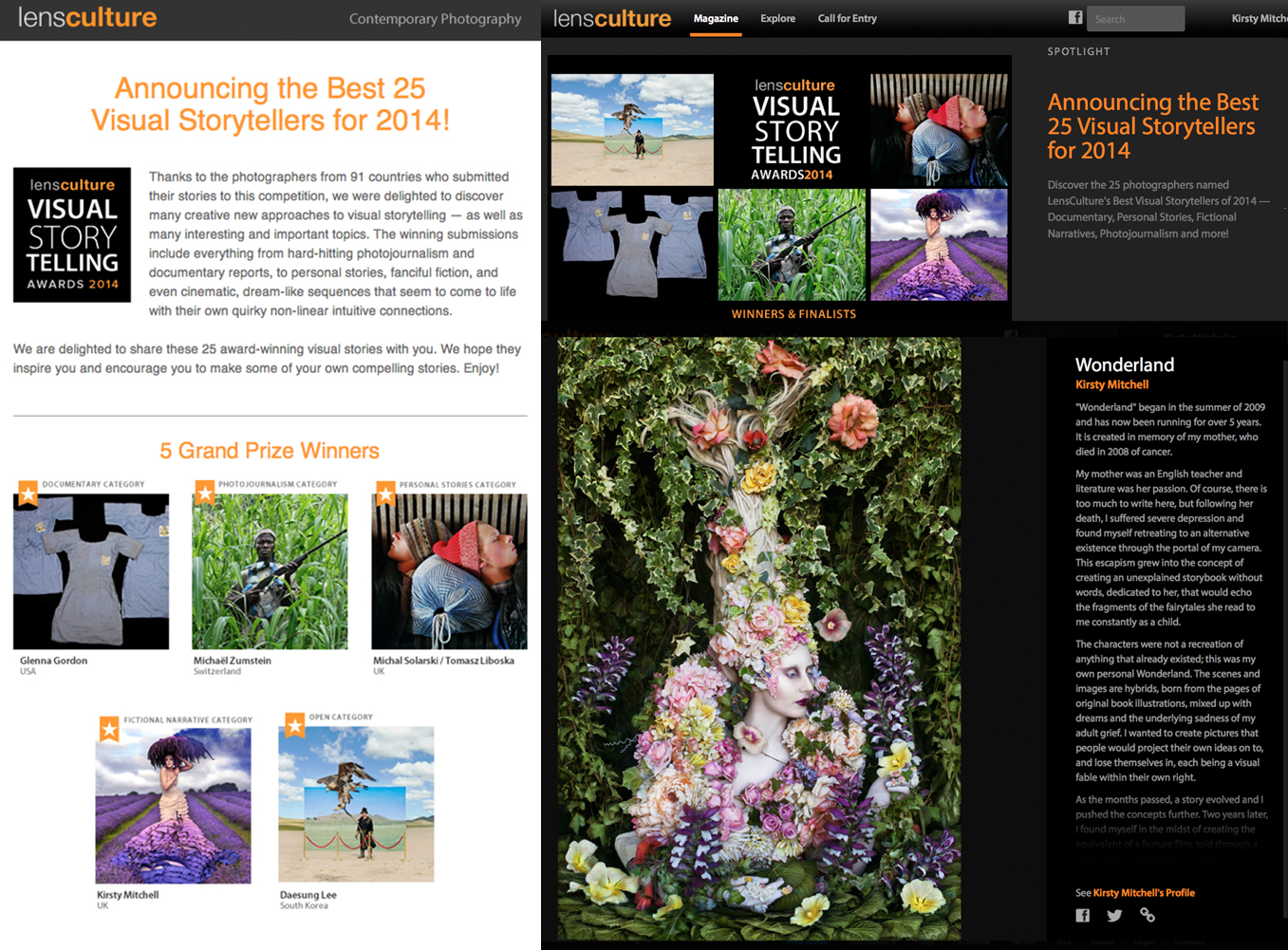 If you had sat me down a month ago, and told me the title of this diary entry, I’m pretty sure I wouldn’t have believed a word of it.
It is honestly quite the most bizarre feeling to think that in the last month ‘Wonderland’ has won a major international award and I have met my all time hero, not only in photography, but in the whole art world – Gregory Crewdson. Gregory is literally the one living artist on the entire planet that if I was given the opportunity to meet anyone, my choice would be him…. seriously, somebody pinch me.

‘Wonderland’ finished exactly one month ago today, and I am still trying to find a moment to gather my thoughts and calm down from all that has happened. I wish this diary entry could be longer, and I had time to write more about all that is going through my head right now, but my to-do list is silently glaring at me from the corner of my screen, and my in-box is lit up like a Christmas tree. So I will just write as best I can about these two amazing moments, and promise to catch up properly soon.
First of all, I am so proud to say that earlier last week ‘Wonderland’ was awarded the Grand Prize for LensCulture’s Visual Storytelling Award under the ‘Fictional Narrative’ category. This is an award that from the moment I read about it, I knew I wanted to be part of. Everything I try to communicate through my photography is storytelling, the entire concept for Wonderland was a ‘storybook without words’ – a way to bring a fictional world to life, that would allow the viewer to dream and believe in that single moment. Of all the competitions online, very few offer such a high level of exposure and support, but most importantly are judged by serious photo critics and curators of a caliber I could never access. This was really what I was after, to have Wonderland considered by experts, something that at the time felt like a bit of a pipe dream, but I crossed my fingers, held my breath, and entered nonetheless……. 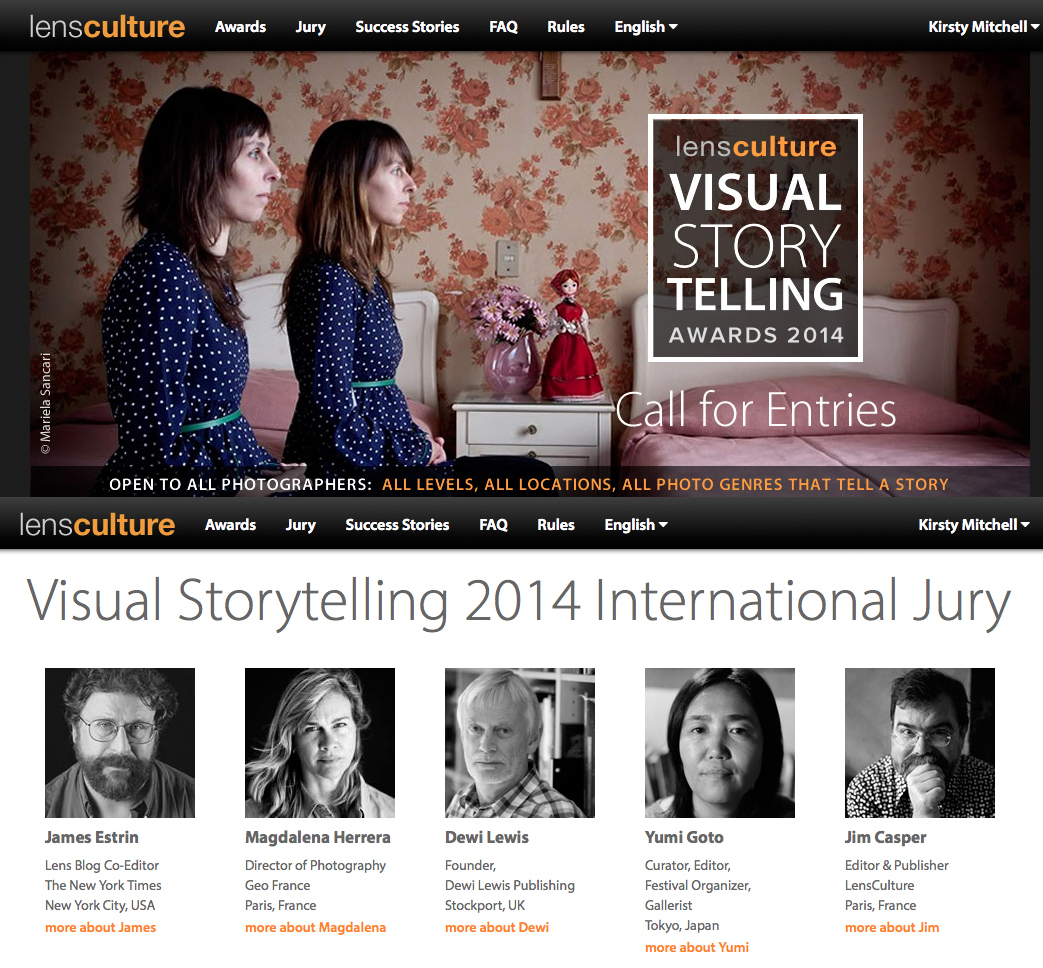 As the weeks progressed I followed the competitions progress online, until I noticed LensCulture had featured my picture ‘The Journey Home’ both on their facebook page, their website and in their weekly mail out to subscribers. I tried not to get my hopes up, but a little tingle had started in my stomach and as the deadline drew near and passed, it is fair to say I walked around with a constant sense of anticipation inside of me.
Finally, on the night of Thanksgiving, just as I was going to bed a message appeared on my Ipad…… it was LensCulture … I had won. 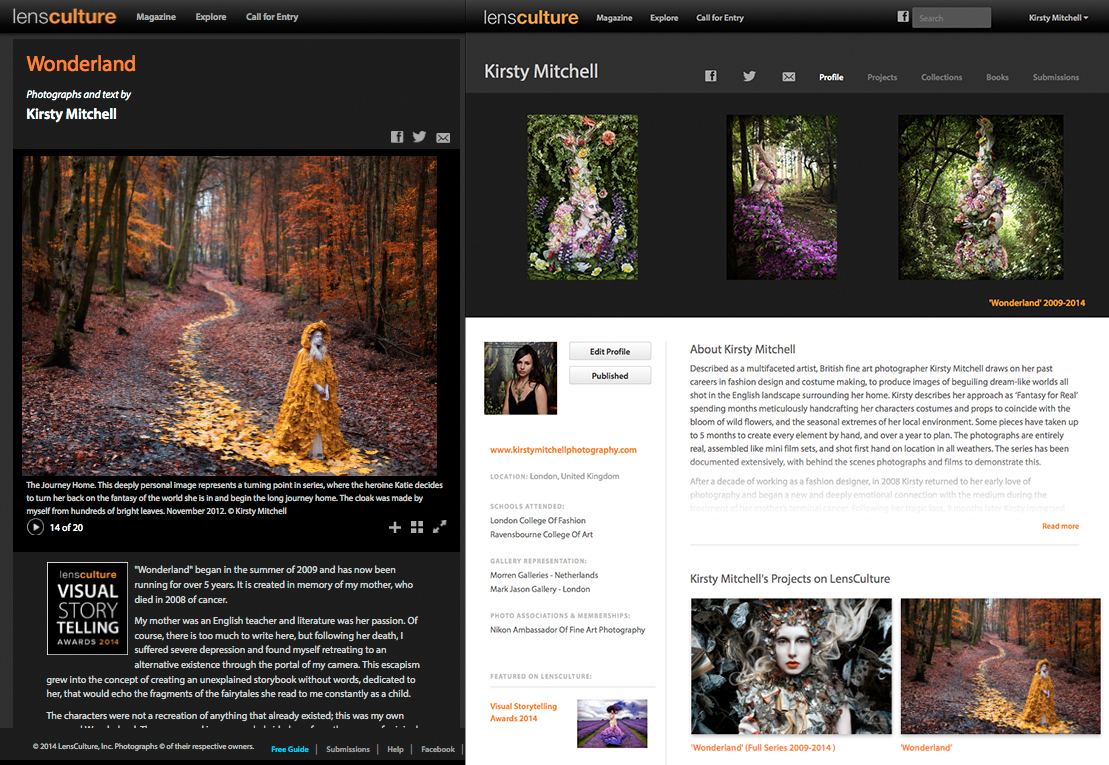 After writing a rather garbled and over excited outburst to poor Jim Casper the editor and one of the judges of the award, I sat in the half light of the living room, next to the dying fire and had a bit of a cry – but for once it was with pure happiness. For the past few weeks since Wonderland had ended, I had continued to work around the clock on interviews and various press items without any real sense of finality. I had gone into autopilot, and just kept going and going, with no time to stop and acknowledge I had actually achieved the goal I had been working towards for 5.5 long years.

To be honest, rightly or wrongly this award felt like my work had finally been validated by people who didn’t know me personally, and had no real understanding of what a struggle the last half decade had been like. To be judged against thousands of entrants from over 91 countries was indescribable. It felt like pitching a happy little flag on top of the mountain I had just clawed my way to the top of. I thought of mum, how she would have squealed and clapped, and messed up my hair with a big joyous ruffle of her hand. I missed her, I told her out loud what had happened in the silence of the room, carefully reading the words of the email off my Ipad like a fool, but it was natural and I felt connected to her in some silly little way…… 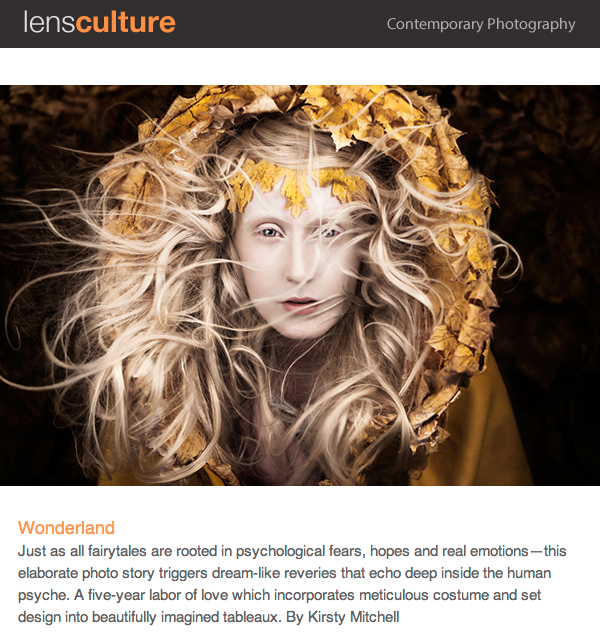 Anyway, the prize for the award consists of a number of elements, a cash prize, a book publishing grant for me to make promotional material about my work, as well as a series of projected exhibitions of the winners and finalists work in five major cities around the world. There is also a winners annual which features the work of each artist, that is sent out to major galleries, press, museums etc –  but most importantly there is the extensive support of the LensCulture team. Meeting these people already feels like an important step forward, we have begun discussing filmed interviews, and a number of exciting things for 2015. I feel privileged to be suddenly connected to a wonderful set of new mentors, who want to help me steer my work in the right direction, the timing of it all feels so poignant, and I’m genuinely excited for the future.

Well this is where all my words fall apart and I end up sounding like a complete and utter crazed fan-girl, but I really don’t care. Quite frankly I want to scream from the rafters I HAVE MET GREGORY CREWDSON !!!!!!!!!!

A couple of months ago, if you are a follower of my facebook page, you would have seen that I have now teamed up not only with Nikon UK, but also Nikon Netherlands too. Nikon NL, approached me to join their latest ad campaign ‘I AM DIFFERENT’ which is a European promotion being rolled out for television, and print in the media. They selected my image ‘The Pure Blood of a Blossom’, and it went on to published in over 100 stores, and is due to follow into Germany, Slovenia, and Austria too. It’s a seriously proud moment for me, and a campaign I’m genuinely excited to be a part of, as being considered ‘different’ is what I truly hope to communicate in my work. 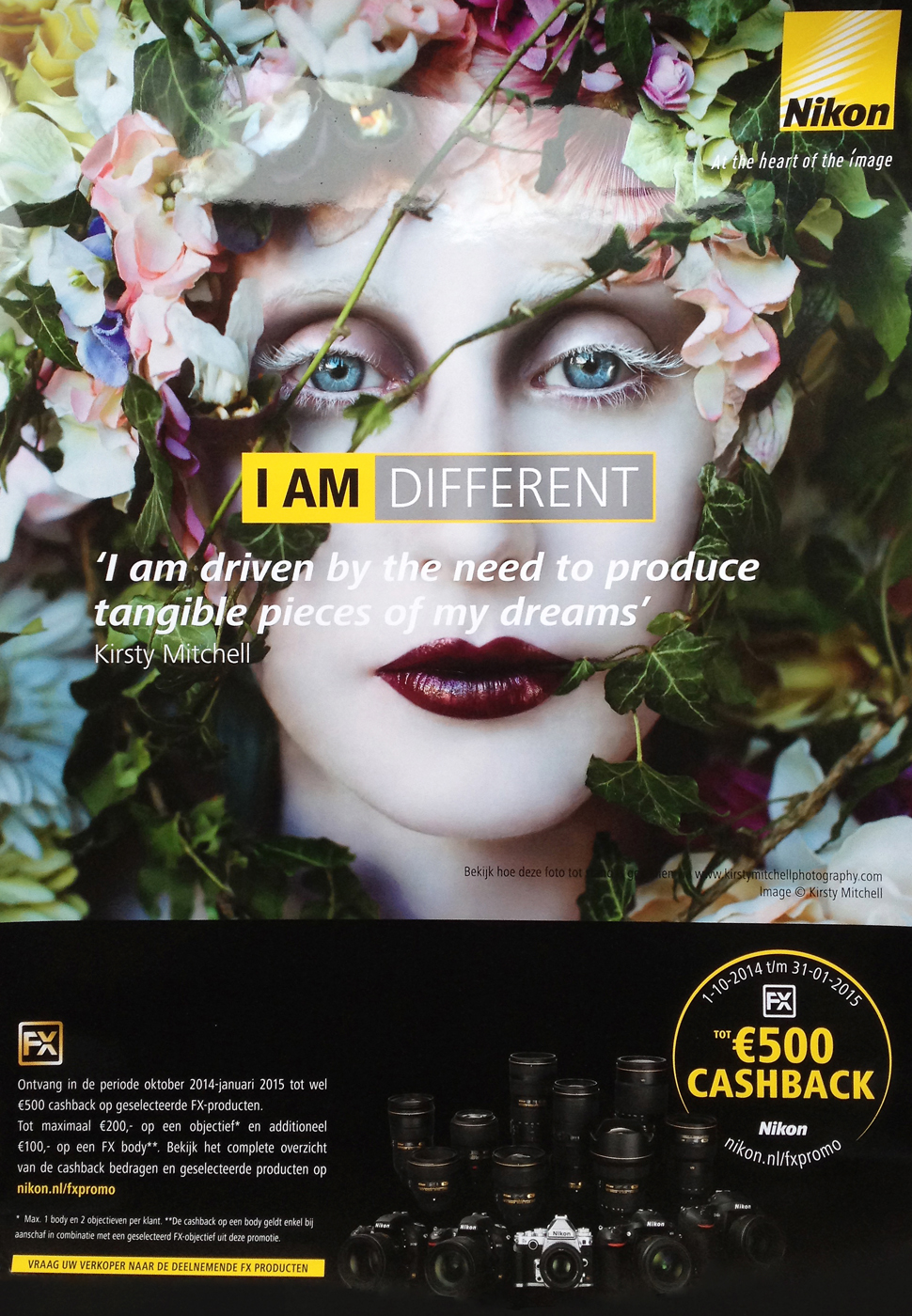 Photograph of my Nikon poster !

To cut a long story short, in the late summer I discovered Nikon were hosting a special private event in Amsterdam in November, and the guest speaker was Gregory Crewdson (who very rarely speaks publicly) I was offered the once in a life-time opportunity of a  front row VIP seat. It is safe to say I have never been so excited to meet anyone in my whole life as I was that night. I arrived clutching my treasured ‘Beneath The Roses’ book and a pen, praying Gregory might have a moment to sign it for me.
I sat in the audience spellbound and listened to him talk about his work for 2 hours, mouthing most of his replies back to myself (as I had already watched almost every film, TV program and interview about him online). It is true to say I don’t actually look at much photography at all, I am more inspired by painting, films and landscape artists, but for me Gregory is a unique one off who fascinates me. He approach to months / years of planning, creating entirely real epic sets, yet still being completely focused on the most minute details, are all things I find myself relating to in my own humble way. The notion of creating an image that stirs a deep emotional reaction, that also leaves you questioning its before and after … a movie in a single frame …. all of this is what I aspire to, and try to communicate with in my own work. 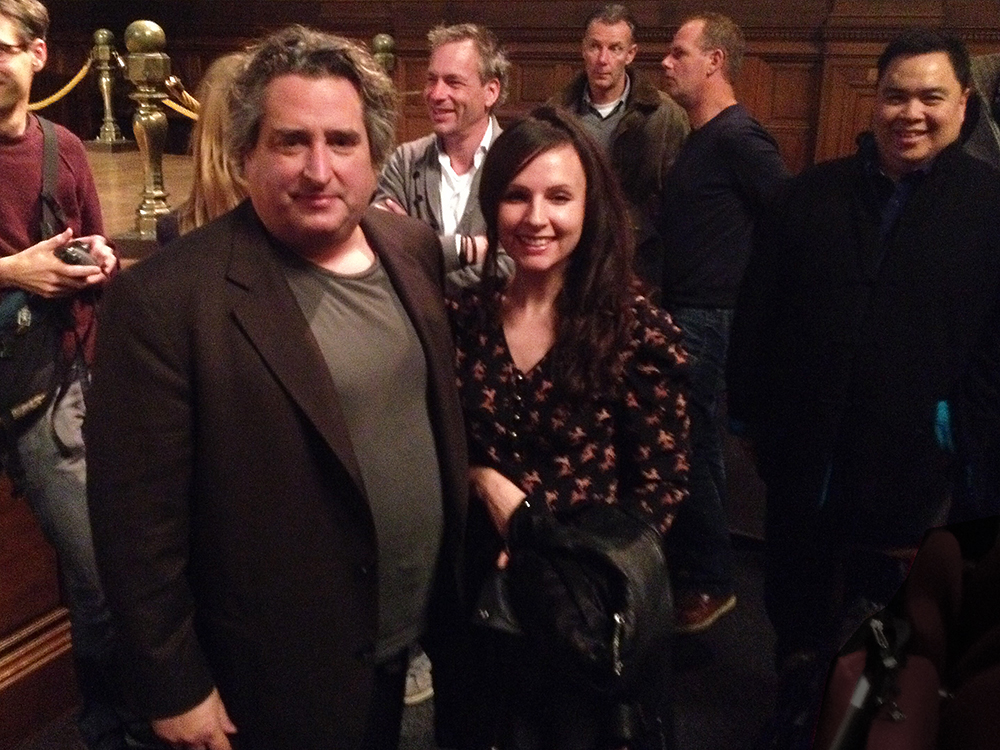 After the talk Gregory signed books, including mine, and to my amazement he asked to see my work. I always carry my Ipad containing Wonderland to any important event, so I nervously pulled it from my bag to show him, desperately trying to think of which picture best summed up my process in one shot.
The moment I switched it on and Gregory saw my screen saver of ‘The White Queen‘, I saw his eyes flicker, and once I opened up the album and ‘The Queen’s Armada’ appeared, he tapped the screen in recognition and said he had seen it before and knew it (I nearly fainted) ! He looked through some of the scenes, and talked to me about the project saying he thought it was very beautiful and emotional –  to be honest I can barely remember any of it, because this was all such a shock. I was utterly star struck, and to think he had even seen my work before was beyond anything I expected to happen that night. After some time I realised there were people hovering around us, so I fumbled in my pocket, gave Gregory my business card and walked away clutching my book with my heart pounding. 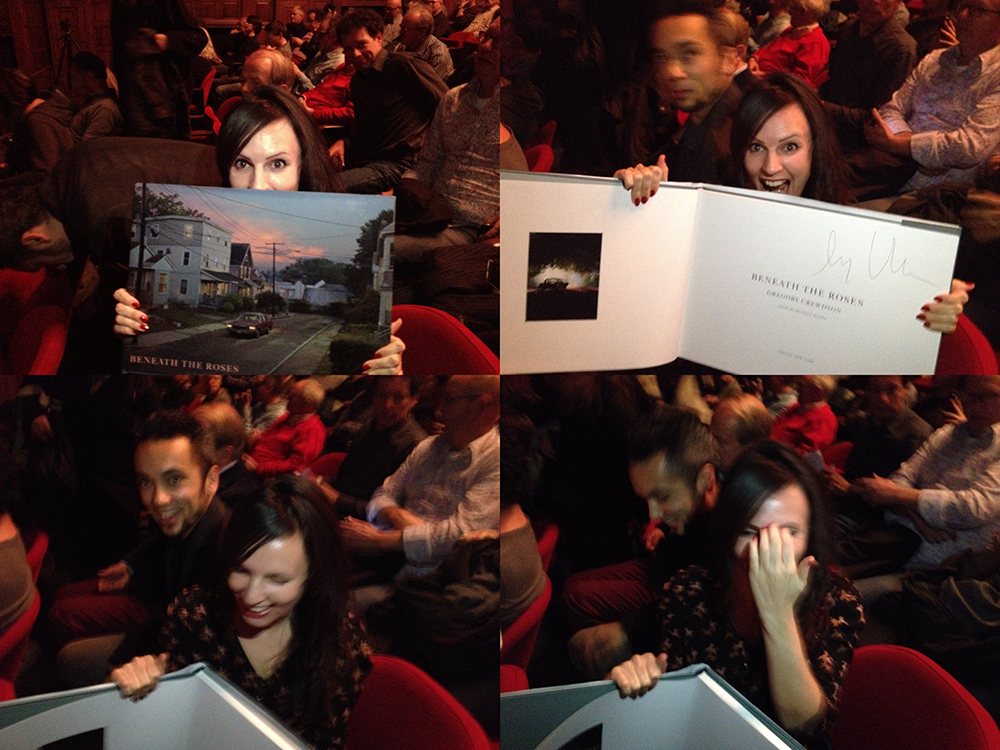 Me failing at keeping my cool, after my book was signed. There are times for acting professional and calm, but this just wasn’t one of them !! 🙂 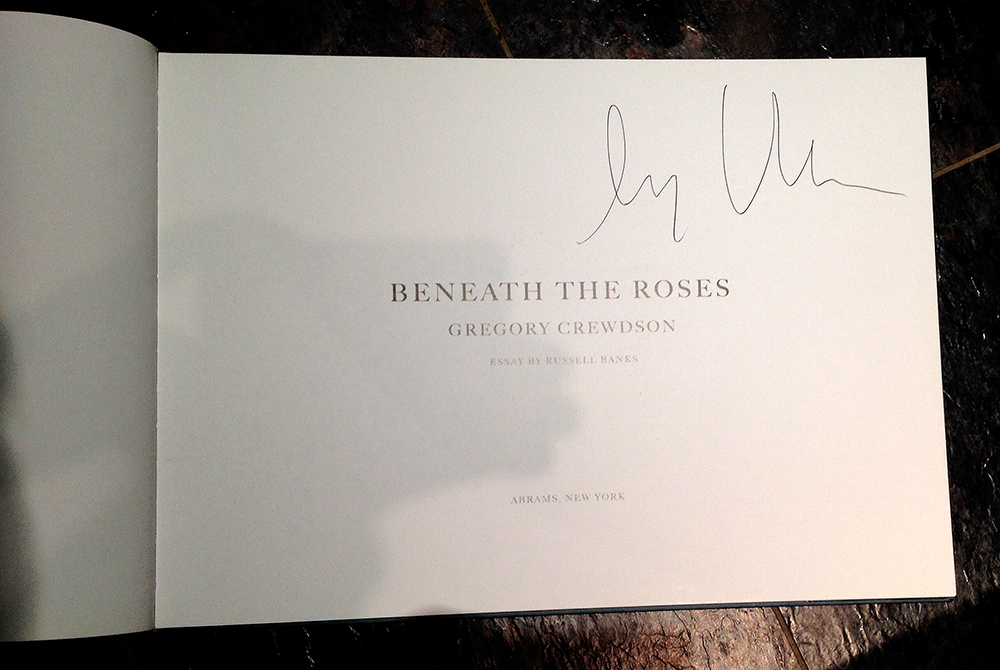 Finally although I never share press on my blog anymore. I wanted to include this beautiful cover story of Wonderland that has just been released this month. It is for ArtTour International‘s special anniversary edition, which is currently one of the fastest growing art magazines on the market. It can be bought from Barnes & Noble as well as many other stores across the US, and can also be ordered internationally online. With over 2.1million readers, in 64 countries it is available in both digital and print format. I think it looks beautiful, so just wanted to end this happy diary entry with the full spread 🙂 !!
So really all my hopes of having a rest since Wonderland finished have completely gone out the window, but now I feel like I am embarking on the next stage. I’m tired, I’m excited, I’m completely running on adrenaline….I have no idea what tomorrow holds…. but I’m ready. 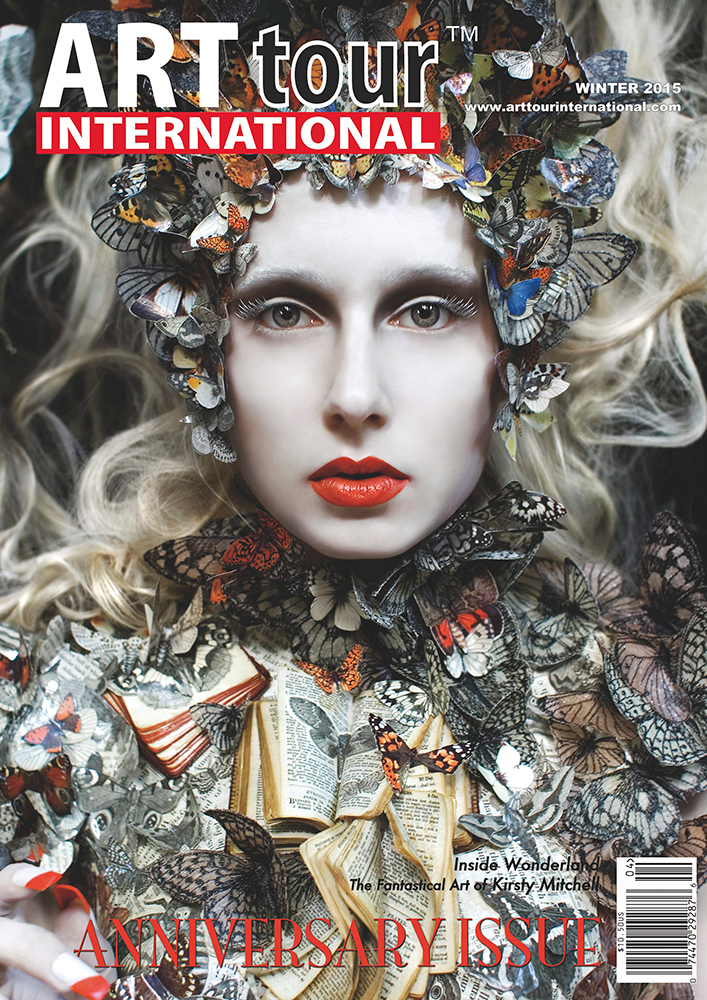 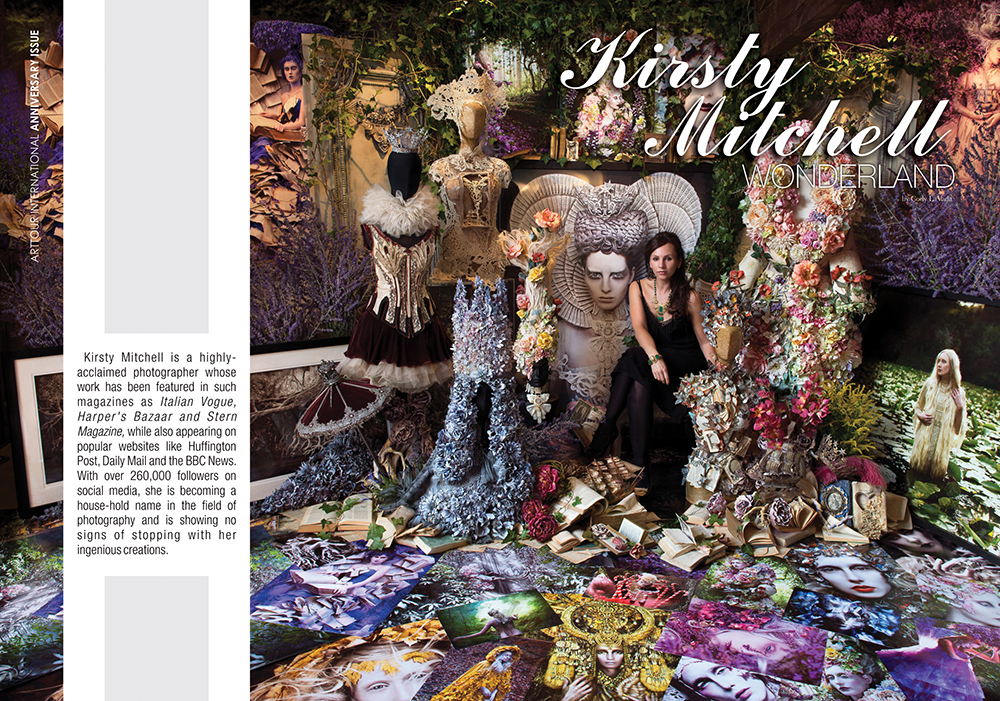 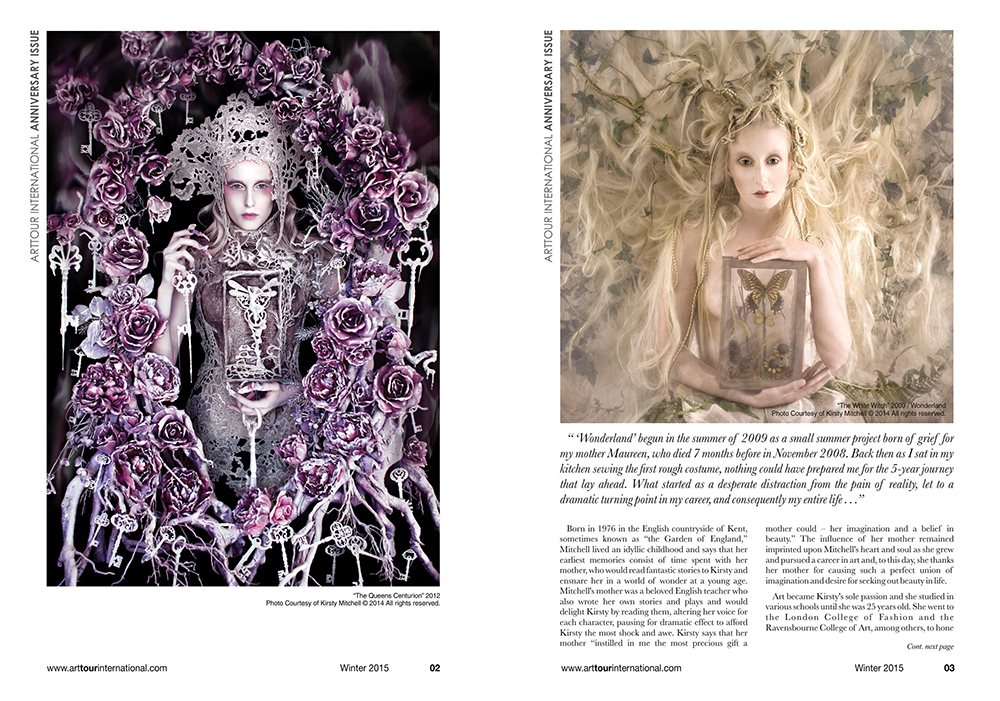 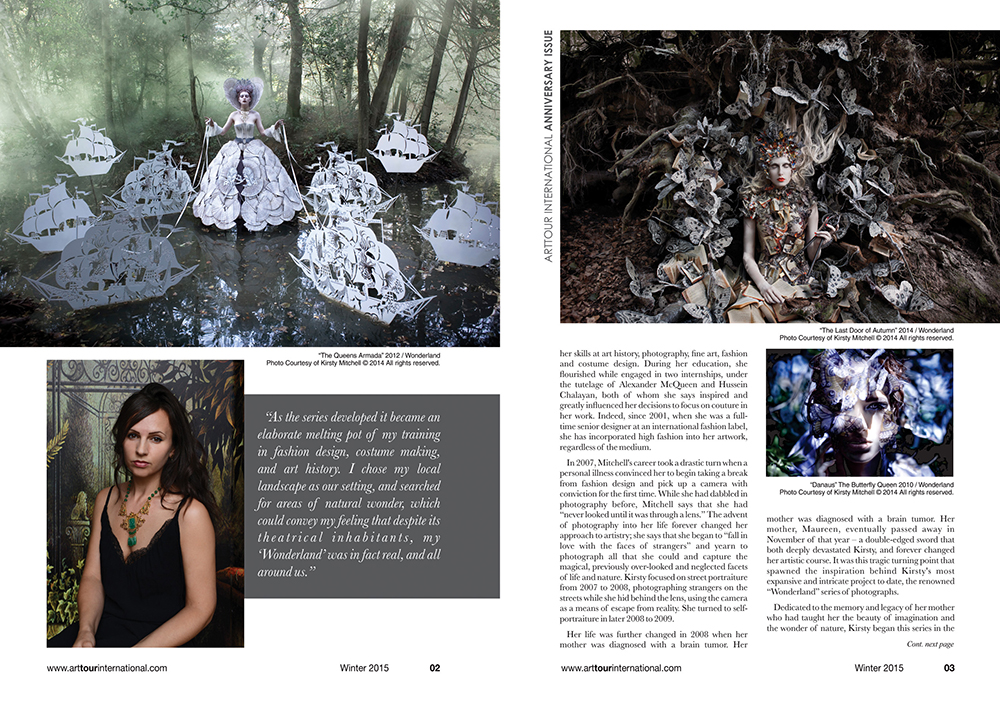 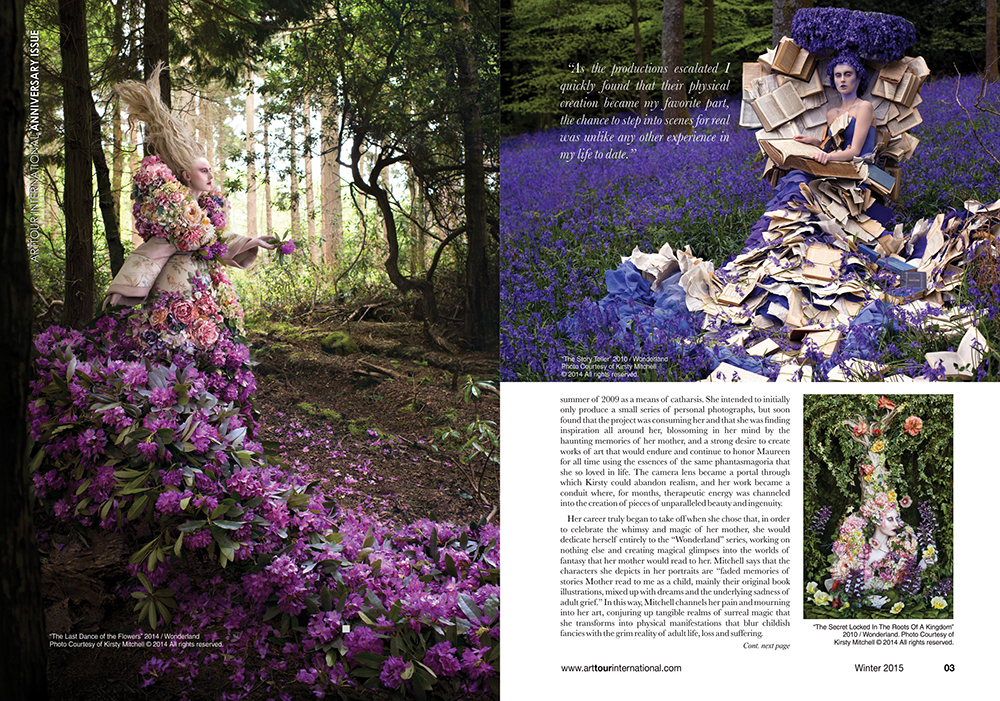 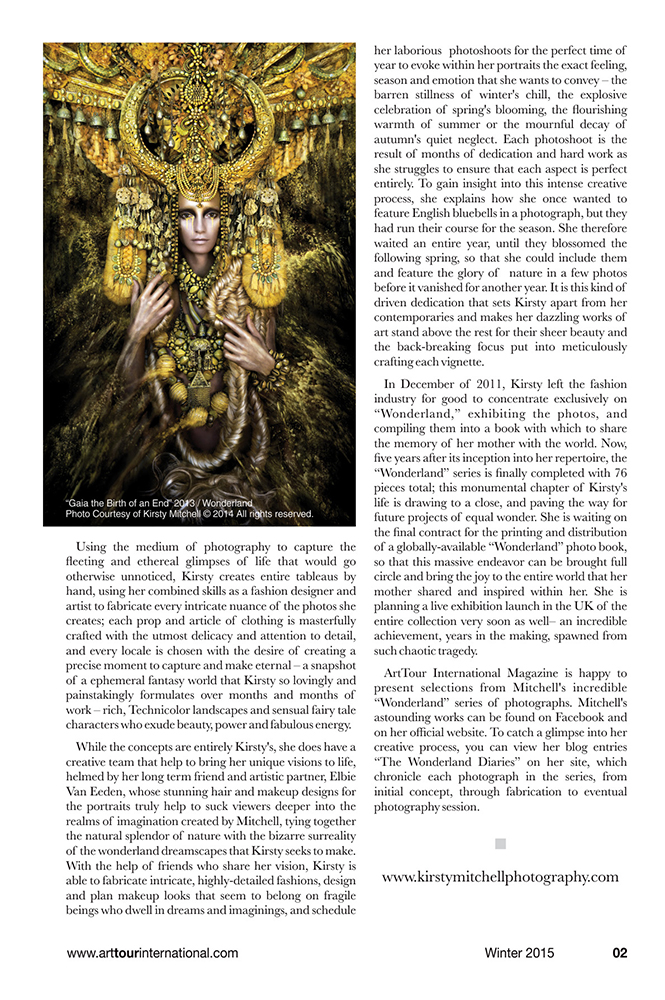