A deeply personal journal of life behind the camera written by Kirsty.
Previous
Back to gallery
Next
22nd April 2013

I guess I need to start this entry with a rather feeble apology for how outdated this news is, but trust me the last few weeks have flown by I’ve been so busy…. I can’t believe it has been 6 weeks since I left for Vegas ! So as you can see from the title and the picture above, I am thrilled to say that I received the Framed award for ‘Best Conceptual Photographer of 2012’ !! It was a bit of a shock to be honest, as out of the 3 categories I had been nominated for, I had already mentality crossed myself off the list for standing a chance, so I was a little dumbstruck when they made the announcement ! But, before I go any further, I just want to say thank you to all of you who voted for me. I was so humbled when I heard the statistics, apparently Framed received over 400,000 votes to all categories this year, which is pretty unbelievable by anyone’s standards. So for me to try and imagine such a volume of people taking time to vote for my work is a strange and overwhelming feeling, and one I still don’t really know how to express my gratitude for. At the moment it is fair to say that 95% of my time is spent alone working on my pictures, I’m a bit of hermit to be honest …. always glued to my screen editing, or literally glued to the latest prop or costume I am making ! I still work very intensely …. every day, 7 days a week, permanently dragging myself towards the end goal of finishing Wonderland this summer. So to stop and think about the support other people have shown me and my work, none of whom I have met in person or even spoken to, is extraordinary…. really .. so thank you, and I truly mean it. Wonderland has been such a roller coaster for me, draining, stressful, exciting,…. emotional, …life changing, there aren’t enough words. It has been the full scale for me, especially since I left my job in 2011. There were days when I’ll admit I panicked about the choices I had made, leaving the security of my fashion career behind obviously being the scariest of them all. But on days like March 12th 2013, when I found myself in  Las Vegas, being given an award purely based on the opinion of others ….  its times like that, that give me clarity and  I know I chose the right path, so thank you for your confidence in me, it means so very, very much.
And (oh cringe) if you want to see me looking rather hyper active and wired  (nervous energy + terrible jet lag) here is a little video of me being briefly interviewed on the night ! 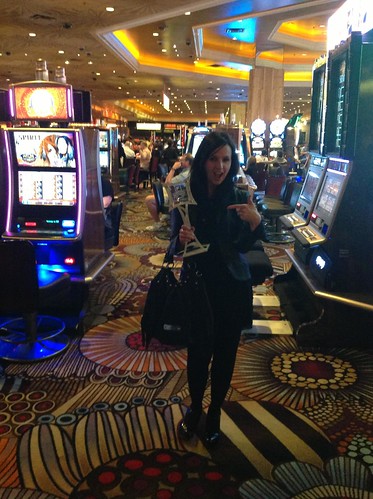 Anyway, I jumped straight in there with the mention of the award, but my whistle stop trip to Vegas was worth every minute, even if I did spend 99% of it in the windowless halls of the MGM Grand, and basically saw nothing of Vegas apart from the hotel suite that I shared with Ben (Von Wong Photography) and Renee (Renee Robin Photography) ! Basically I flew to Vegas without a clue about the fact there was an enormous photography convention happening in the MGM Grand for the duration of my stay. The event was called WPPI and was packed with industry leaders from all things photography – every form of camera gear you can imagine ,as well as all the accessories, photo papers, gadgets and gismos ….. you name it, it was there.  So from the moment I arrived I had Ben and Renee telling me to put some Wonderland images on my phone, and was then marched into the arena and introduced to a constant stream of companies.  I was a bit of a blithering jet lagged English girl with no idea where I was, but I soon went into automatic and started explaining the project to anyone who wanted to listen, and it was an incredible experience for me. The reactions to Wonderland were unlike anything I had experienced before, so many people were were so shocked at the level of work involved in the pictures, that it seemed to have a snow ball effect. I was passed from one person to the next and found myself talking to the likes of the head of marketing for Adobe ! I suppose I’m always used to talking to people who know my work, rather than introducing it cold, so for me this reaction was something I wasn’t expecting but was absolutely thrilled by. The  days that passed were a blur ( I was awake for over 30 hours before my first sleep!) but each day brought wonderful introductions and contacts that were invaluable. I gave away every business card I had, came back with almost as many from others, so for now there are some interesting developments in the pipeline, and I’ll let you know any news as soon as it happens.
But anyway, forgetting business ….. the truly lovely side of throwing myself on a plane, was that I got to meet some very special people, many of whom were distant Internet friends I never imagined having the chance to meet, and that was the magical glue that somehow kept me standing up, and held me together throughout those long hours. Aside from my room mates Ben and Renee, a few of the others I met were Brooke Shaden , Joel Robinson , David J Crewe , Aaron Nace , the crew from Framed , Phlearn , SLR lounge and a long term friend I’ve wanted to meet for ages the ridiculously talented Zemotion who incidentally won the Framed award for The Best Beauty Photographer of 2012.  So If you want a bit of a laugh and want to see us talking rubbish about how we met and briefly introducing ourselves, we did a little sound-bite film for SLR lounge just before Jingna (Zemotion) and I had to leave for the airport.  Silly as it is, I love this because it was just how we were during the entire trip, wired, non stop jabbering …. and a lot of giggles. 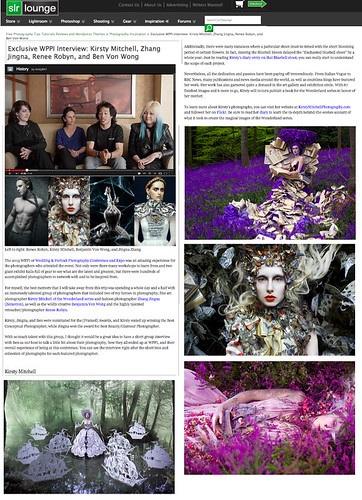 On my first night I took my only proper tourist shot of Vegas from the balcony of our amazing suite at the Cosmopolitan (That Ben had managed to get us at a fantastic deal) . Under mine (below) is Ben’s picture of the three of looking like over excited Vegas-virgins about to go off into the night ! Oh dear :-/  ! 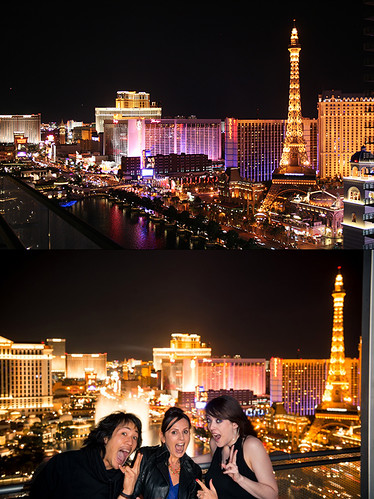 Finally (below) here’s one little picture that for me I think I will always treasure. It was just a little snap I took on my phone of Ben, Renee and Jingna walking back to the hotel, before I had to quickly pack my bags and leave. My feet were stinging from standing up all day doing the WPPI circuit, my brain was jet lagged mush, and I was filled with regret that I hadn’t made my trip longer to have given me one more day to spend with these new friends and enjoy the place properly. In the UK it was snowing, and this felt like the first time in months I had felt the sun on my face. It was just a tiny moment of beauty, standing in that pool of light, with tingling skin from excitement and exhaustion, knowing that the trip had been worth it, and I wouldn’t return home empty handed. Seeing the silhouettes of the three of them against the cityscape made me stop and remember my first early days, when all I had was a £40 compact camera I used to take my street portraits with. It’s  fleeting fragments of everyday magic like these, that first made me take pictures…. moments when reality looks like a film, when light, shadow and emotion collide and slow down…… and I see things as if from another persons perspective. Its hard to describe, but I felt a long lost jolt of electricity as I reached into my pocket for my phone to take a shot. As the laughs of the three of them drifted over the traffic while they jumped and posed and complained at my repeated requests ….. their energy was a warm as the sun in their hair and it washed over me.
For me its always these types of pictures that make me the happiest … its more about the essence of people and the moment, than the actual details if that makes any sense. The fact there are no faces makes no difference to me whatsoever ….. because I can remember them and how it was more clearly like this, than in any other way……….. just as a key fits a lock. 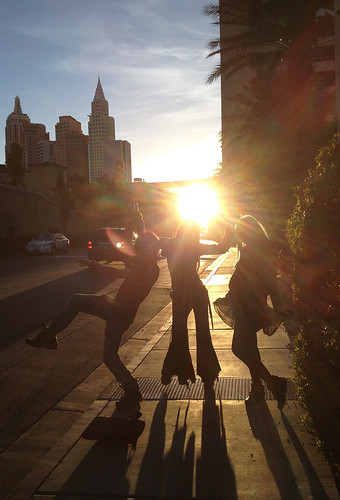 So the other wonderful news I have to announce is that the dates are confirmed for my debut solo show with the Morren Galleries in Amsterdam ! The show will run for 2 months from May 26th – July 23rd, at Prinsengracht 572, 1017 KR Amsterdam  and will comprise of some of the biggest pieces in the Wonderland collection. I have been working really closely with my wonderful printers and have now started producing the pieces to be sent to Amsterdam. Its been so incredibly exciting to see the scale of the works, some of my favourite portraits will be displayed at 140cm wide and the clarity is so beautiful I wanted to share with you some pictures of the first ones to be produced. These pieces will be bonded on to aluminum and finished with a 1cm deep plexiglass layer to give a frameless finish. 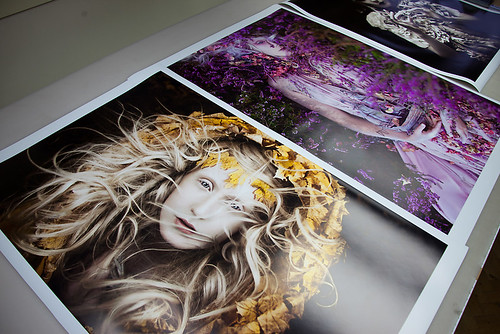 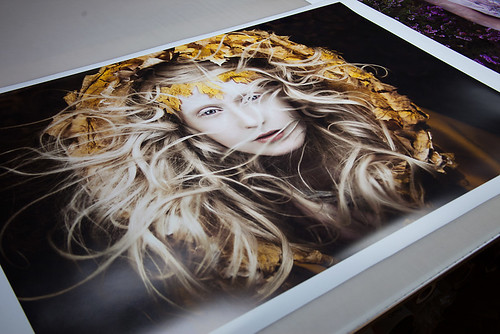 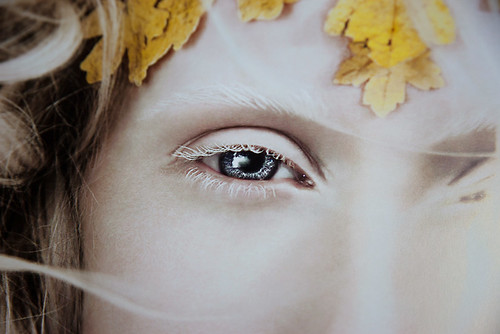 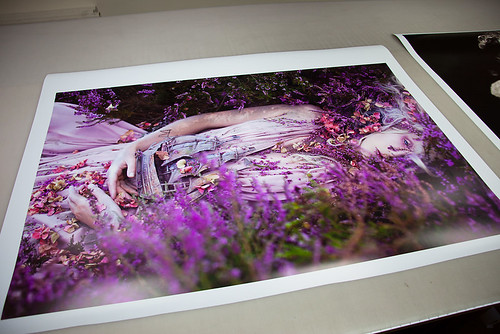 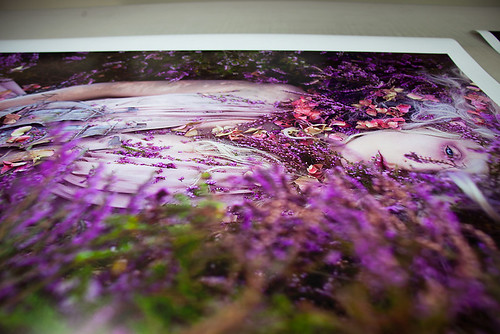 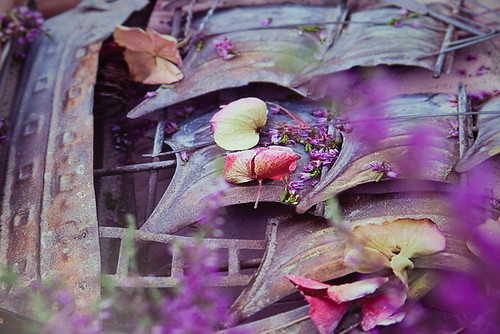 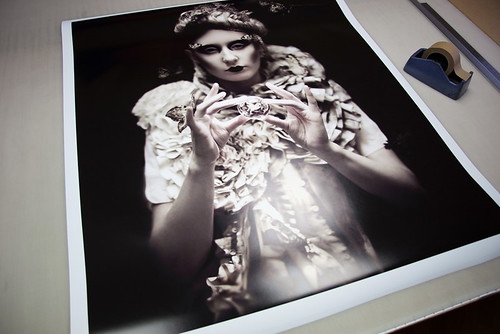 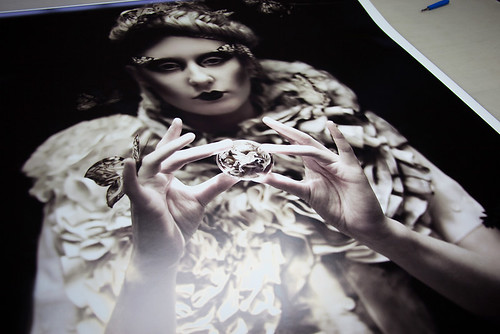 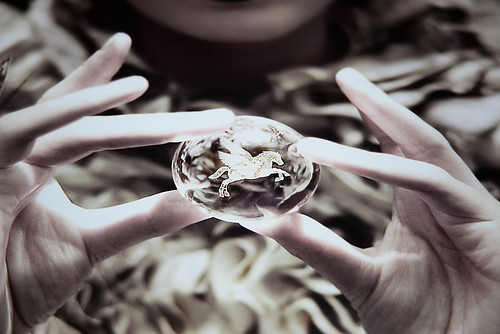 My work was also exhibited for the first time last week with the Morren Gallery at ‘ART 2013‘ , and will also be available at KunstRAI on the 15th of May where I will be exhibited alongside Billy&Hell’s  and  Barbara De Vries under the Morren Galleries contemporary photography gallery Morpho .
So there is a lot happening right now! As well as all this, I am in the process of moving into my new workshop, which is slowly coming together, ….. and at the same time I’m STILL working on making the props for the final Wonderland scenes !

So that’s my very late and rather long update for now ! More soon, and hopefully some pictures from the art fairs to show you the big pieces in all their glory. I also have a very, very important piece of press with a very prestigious magazine coming in the next month which I cannot wait to show you ….  so I promise it wont be so long until I write again.