A deeply personal journal of life behind the camera written by Kirsty.
Previous
Back to gallery
Next
6th February 2012

Well here goes ….. to be honest I don’t really know how to explain what happened after I uploaded the first 3 images of Wonderlands return. Within minutes of posting ‘The White Queen’ series my laptop nearly blew up. I never imagined such a response; I was utterly shocked and so humbled by the overwhelming reaction. I have had emails from Russia, Australia, New Zealand, America, France, Switzerland and even Bulgaria! My Facebook group jumped by over 2000 people and I have so far given 4 interviews, with more requests waiting. The pictures have been blogged around the planet, as well as all 5 out of 5 being featured on the front page of Italian Vogue’s ‘photovogue’ with ‘The Queen’s Armada’ being made their photo of the day!  So I wanted to make this post to share the interview links with you all, but to also just say thank you from the bottom of my heart to everyone who wrote to me, or left messages on the various sites and my fb group, your support honestly means so much.  The other big news is that I was selected as a finalist for the huge global ‘Artists Wanted ‘Exposure’ competition last week, and I can now also say that the same happened with their ‘One life’ competition that was announced at the end of 2011. I didn’t mention it at the time as the pictures I entered were unreleased, and I didn’t want to draw attention to them. One of the pictures ‘Gammelyn’s Daughter, a Waking Dream’ has been selected by the jury to be printed in their ‘One life in Photos’ book, which will be released soon.

So anyway here’s a round up of the interviews and various bit and bobs. I will attach an English Translation of the Bulgarian Interview at the end of this post for anyone who would like to read it 😉 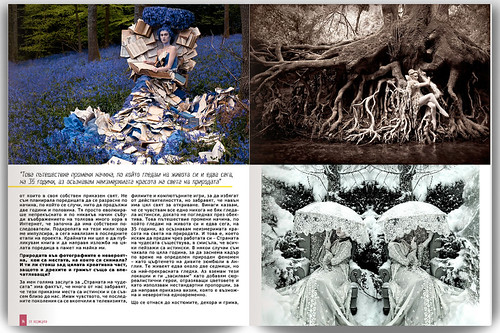 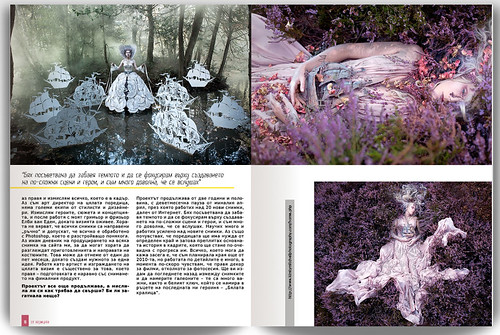 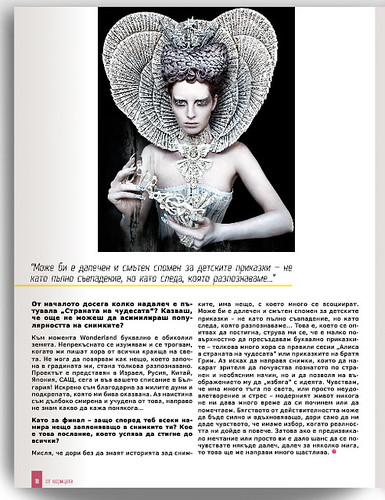 The first interview I gave for the new pictures was an exclusive I did with the amazing people at My Modern Met who have over 3 million readers a month. They have supported myself and Wonderland from the very beginning, so I wanted them to be the ones that got the release. You can read it here. 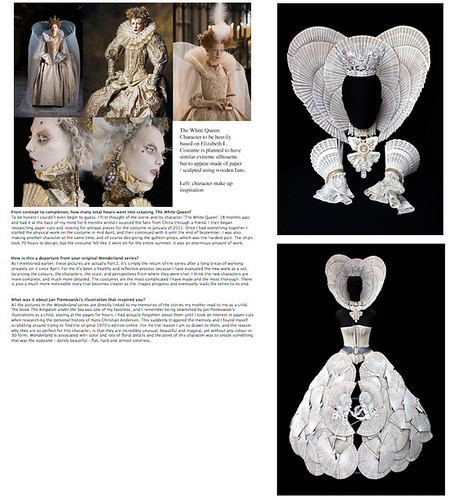 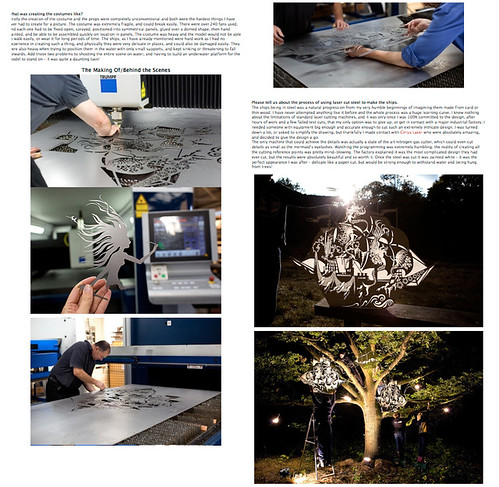 The third interview I did was also with a long running friend, the lovely Mike at ‘Warholian’ . His was the first proper interview I think I ever did about 2 years ago, so it was great to catch up with him again too. You can read it here. 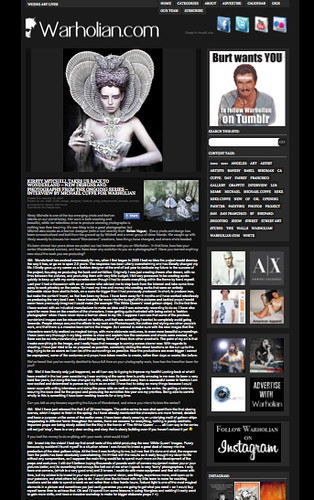 Then there was the Exposure competition –

and the ‘One Life’ competition – 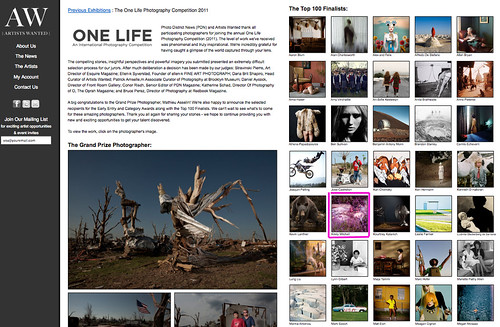 And finally one of my old self portraits has been made the cover of ILEX publishers spring catalogue, which is pretty funny ! I have a chapter in one of their new books that will be released in March on Creative Portraiture , and their designer chose my ugly mug for the front page ! They also printed ‘The Storyteller’ from Wonderland on the inside cover too. 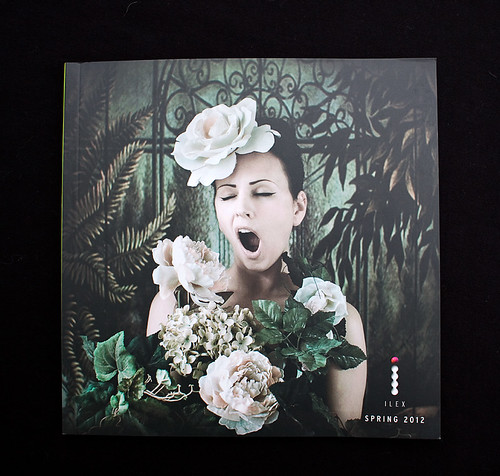 So that’s it for the moment. I have already released 3 new images following The White Queen pictures which you can see in the main Wonderland gallery, and I will be writing a big blog post on those in the coming week. I’m also excited to say that I have redesigned my whole website, and hope to launch it very soon. The new site will be full widescreen and be available to Ipads and Iphones, horray!.

Finally  for anyone who wanted to read the Bulgarian interview, this is the translation below  🙂  –

Dear Kirsty, It`s the debut of your Wonderland series in front of Bulgarian public and we thank you for your trust. How did you start the project, we know those beautiful images have a sad story behind them…

This is often a difficult question to answer in a few short words because the project and its origins are extremely personal and emotional to me on levels that might not always be apparent to the casual viewer. The series is my tribute to the memory of my mother who I sadly lost in November 2008. She was my best friend; and died of a brain tumor miles away from her family and friends in the UK, after moving to France for her retirement.  She was too ill to bring home, and so she had a tiny funeral that broke my heart. I remember walking away on that day wanting, and needing to do something that would let people know who she was, and how she had touched the lives of so many children. She had been an English teacher all her life, and spent years inspiring her students, and myself with her passion for literature and her captivating stories. She had read to me everyday until I was too old to admit it to my friends, and instilled a belief in beauty and wonder that has now become the root of my work.  So I decided this was how I wanted her to be remembered …. to create something that would celebrate her gift to others – magical worlds full of colour and endless possibility. Six months after her passing I began work on the concept of creating a visual storybook without words, of unexplained beautiful strange characters, each within their own magical worlds. I never planned for the series to grow in the way it has, or to last over 2.5 years. It just evolved constantly, and seemed to capture the imagination of so many online that it began to have its own following.  The support of so many kind people has spurred me on, and I am now entering into the final stages of the project. The final focus is to publish a book and create an exhibition of the entire series in her memory

The photos are all stunning and it`s very curious how they were taken. Nature is unbelievable can you tell us more about the locations? And also a major part – the clothes, the make-up… Is it you behind all that? Not the execution, but the creative part?

A huge part of Wonderland is about the fact that so many of us seem to forget that these magical places are real and are on our doorsteps. I feel that recent generations are fixated on TV, films, and computer games for their escapism, forgetting that there is a whole world out there to discover. I always say I felt like I never ‘truly looked’ until it was through a lens. This journey has changed my view of life and I am only now at the age of 35 realising the immeasurable beauty of the natural world. So this is what I try to communicate in my work – Wonderland is real, in the sense of all the landscapes are true. In some cases I have waited for a whole year to shoot a picture during a certain natural phenomenon  – like the sudden appearance of the bluebell flowers in the UK. They only last around 2 weeks but are the most incredible sight. I take these locations and then boost them with surreal characters echoing the colours and using unnatural proportions, to produce a dream like image that is believable yet surreal at the same time.
With regards to the costumes, props and make-up, I make and design everything within the frame. The entire series is art directed by myself, there are no big teams of stylists or designers. I create the characters, and storyboard the concept, then work with my make-up and hair artist Elbie Van Eeden on bringing the vision to life. People don’t seem to believe that all the images are hand made, and often presume its all done in Photoshop, which can be very frustrating. I keep a diary of how each shoot was produced on my website so people can see the props and costumes being made, its can take anything from 1 – 5 months to create what I need for one idea. I work as an artist and creating the entire image is vital to what I do, the preparation is equal to photographing the finished product.

Its a project that`s actually still going on, have you ever thought how it should end? Could you give us a hint, please?

The project has been running for 2.5 years now with a 9-month break since last April during which I have been working on 20 new images away from the Internet. I was advised to slow down and really focus on creating more complicated scenes and characters, and I’m really glad that I did. I learnt a great deal, and have worked incredibly hard on the development of the new shoots.  I also felt that the series would need a definite end, and so I have been weaving an underlying story into the pictures, which will become more apparent as the series progresses. All I can say is I have had the ending planned for since 2010, but the scenes are a great deal of work to produce as it now feels more like creating a film set than just a picture. The only hint I can give is to look back through the images and find the galleon ships, they are very important, as well as the key being held in the hands of the latest addition to the series ‘The White Queen’ 🙂

Since the beginning, how far has your Wonderland traveled? You have said you still cannot believe how popular those photos became and the many countries and people you have showed them to.

Wonderland has literally been around the planet now. I am constantly amazed and touched to hear from people all over the world. I can’t believe how something that began in my back garden has become so recognized. The project has been written about in Israel, Russia, China, Japan, America, Europe, and now in your magazine for Bulgaria! I am so genuinely grateful for all the kind things have said and the support I have been shown, I’m honestly deeply humbled and surprised, I really don’t know what to say sometimes.

At last, why do you think that everyone finds something fascinating in your photos? What is the message in them that manages to get to everyone?

I think even without knowing the story behind the pictures, there is something that so many of us can tap into. A distant faded memory of childhood stories, not an exact match, but a thread of recognition. That was what I was trying to achieve, I feel it’s a little empty to recreate actual stories – so many people have done ‘Alice in Wonderland’ pictures, or Grimm’s fairytales. I wanted to create images that made the viewer feel familiar in a strange unexplained way, but then allowed their imagination to run away with the idea. I feel there’s a lot of sadness in the world, or just simple frustration and stress – modern life never gives us much time to rest or dream. Escapism can be powerful, inspiring, or just give you a feeling of possibility when reality can get too much. So if it’s a daydream, or just a chance to feel far, far away for a few moments, then that would make me very happy 🙂