A deeply personal journal of life behind the camera written by Kirsty.
Previous
Back to gallery
Next
5th March 2011

Wonderland- ‘A Most beautiful Death” and “Annasi’s Widow” 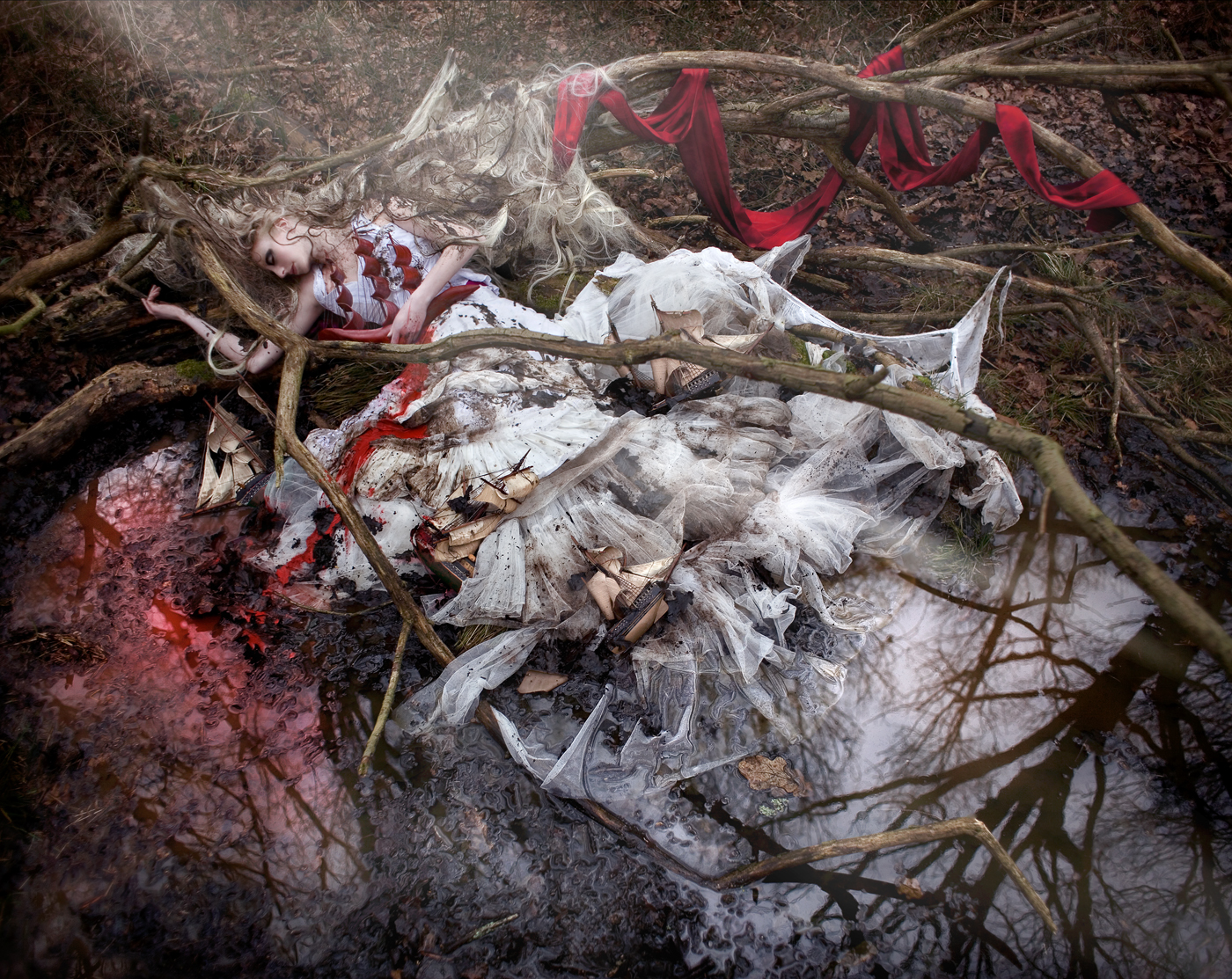 ‘A Most Beautiful Death’

Once again I’m sitting here staring at an empty page wondering how I can explain the next two pictures without avoiding my less than glamorous approach to shooting!Although I guess that would defeat the object of writing everything down, and after all that’s why I try to record the reality, as well as the finished polished product.  One day I hope to film a Wonderland shoot, although I’m apprehensive of what people will think when they realise its actually just a few friends falling about in the mud trying to produce something that will look beautiful and credible. Our shoots are never easy and ‘A Most Beautiful Death’ was no exception. It was the least number of people we’ve ever had on a Wonderland shoot, just me, Elbie and Katie, 3 girls, with a full car’s worth of kit, on a freezing English Sunday in February.

The day started with Katie arriving at my house to have her hair and make-up done, whilst I started digging holes in my back garden. I carried buckets of mud into the kitchen and sieved them with fresh water into bottles, its the best I could do to create ‘clean mud’. I removed 4 worms, sticks, dead bugs, grit and produced a collection of containers filled with the pure rich chocolate brown sludge. Katie sat patiently having her beautiful hair tonged into curls by Elbie, whilst I limply tried to explain that this mud ‘wouldn’t be too bad’ when I poured it over her head on location. We knew the picture would take quite a while to set up as there were a lot of elements I wanted to include. I’ve always been mildly obsessed with the type of staging used in Victorian photography, the painted studio backdrops, the half costumes people would wear over their normal clothes. This idea of creating a momentary facade that would only exist for a brief picture, and be gone minutes later, makes the finished product all the more precious to me. It would be impossible to re-create the scenes again, like a magic trick they come and go, with nothing but a pile of cloth, spilt paint, and discarded props left in its wake. Sometimes I will make an entire dress on the spot for a picture, by pinning and draping fabric around the model until its scale matches the environment it is in. Other times I will start with a normal dress, and then explode the scale further by attaching more and more pieces on location, it really depends on the situation. Unfortunately for Katie this picture would involve making most of the decisions once she was lying in the swamp, something I was extremely worried about, bearing in mind the temperature outside. So we grabbed the tutu skirts, piles of white silk, a vintage cotton dress, another roll of red silk, and bagged up the model galleon ships. It was threatening to rain (as always) so we threw everything into bin sacks and carrier bags, there wasn’t a moment to lose. Slowly the car filled up with more and more equipment, and I began to realize little the 3 of us were in comparison. 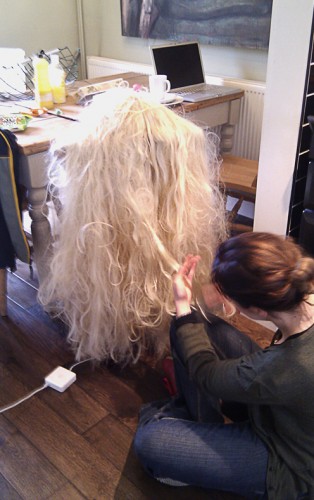 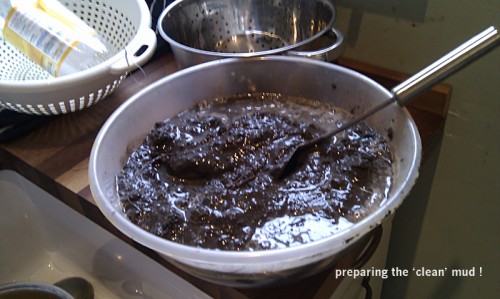 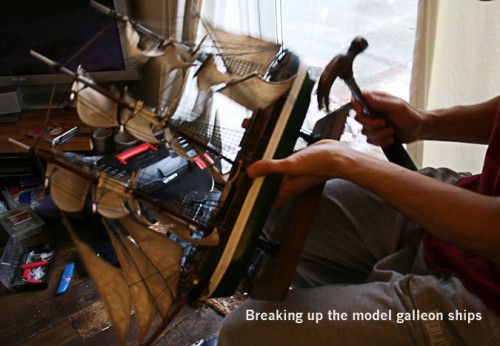 Once we arrived at the location we left the car at the side of the road, and loaded ourselves up. It was a ridiculous sight, all 3 of us had bags tied across our bodies, things hanging from straps, bin bags swinging around our legs, carrier bags worn on our shoulders; we looked like we were going to build a shanty town, rather than create a beautiful picture! So we stumbled and struggled through the undergrowth, the location was a nature reserve which is notorious for constantly changing all year round. Every time I return to this place it looks different, and I often find it difficult to get my bearings. The woodland floor was covered in long vines with really sharp thorns that scratched our legs, and caught on our clothes. We had to stop every few minutes to rest, as our hands were going red from the weight of the bags. We were groaning, swearing, sweating and hoping we were actually heading in the right direction, although laughing all the way too. The 3 of us have been through so much for Wonderland that it’s always a bit of a pantomime when we go off on these adventures, and despite aching all over, I love it when its just us being true to ourselves. I never have to pretend I’m anything I’m not, I feel free and all my focus is on the finished shot. There’s a clarity in working with people you love and trust, and I’m so grateful for our little gang.

Eventually we arrived at the ‘swamp’, or cesspool, I’m not sure how politely I can put it. Katie wasn’t phased at all, and calmly stood whilst we dumped everything by the trees. The pool was full of stagnant water and smelt so bad it made your eyes water. There was dead tree next to the waters edge, but I wanted to dress the scene a little more, so we pulled and heaved huge broken branches from the surrounding woodland, and balanced them on top of what was already there. Next Katie pulled the wetsuit over her legs and waist, and I began dressing her over the top.  I painted her skirts with some of the clean mud from the garden, and after that there was nothing for it, she had to get into the water. 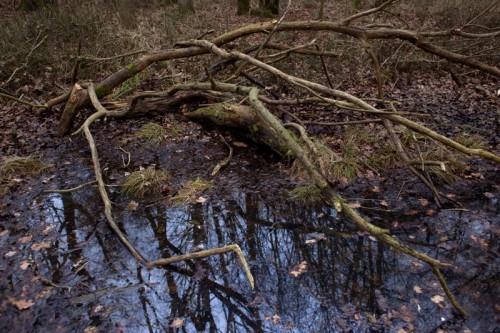 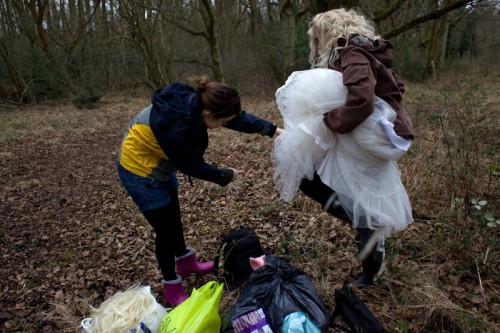 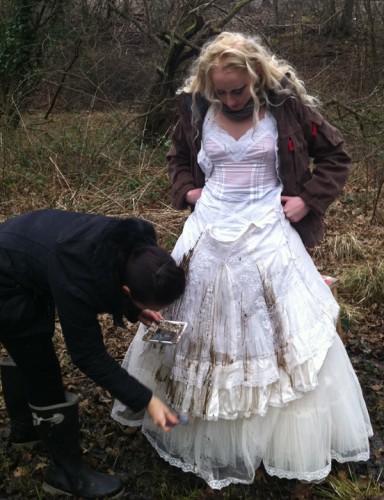 This was when everything became much more stressful. I was seriously concerned about making Katie ill, it was freezing cold, the water was absolutely disgusting, and god knows what was in it. We did everything we could to make her situation a little better, with a hot water bottle and a soggy cushion, but really this meant nothing when you were in her position. I wanted the finished picture to look like a painting, and for that reason everything had to be very considered. It was impossible to take this picture quickly and so my heart was pounding as Elbie and I rushed around Katie pouring mud onto her petticoats , ripping the dress, arranging branches, draping silk. I had to keep standing on a stool in the middle of the water to see how the shot would look from high up, and nearly slipped off several times –  it was a quiet chaos.

Next Elbie dragging the enormous hair extensions across the branches until Katie appeared to be completely entangled, and finally we reached the point where she had to remove her last layer of warm clothing and lay her head in the mud. I could have cried for her it was so horrible, I keep saying ‘sorry, sorry’ as I slowly poured the last of the mud into her blonde curls and wiped it across her face. Everything was in place, I passed her the red galleon ship from The Briar Rose, and lined up the red silk trail with her pose, finally pouring the red ‘blood’ across her body and into the water beside her, we were ready.

I climbed onto the high stool we had dug into the water bed, and Elbie held my legs whilst I found my balance. It was only then when I looked through the lens that I realised what we had created. I had hoped for a ‘painting’, and once again somehow, there we were the 3 of us in this moment, whilst the world ticked on regardless. It was one of those winter days when the sky is somehow heavy, it was only 2pm but it felt like the sun was ready to set. It was dark, the air felt heavy as the swollen grey clouds pushed against each other, determined to block out the sun. The woods were silent apart from the distant cries of crows that echoed in the cold sky overhead. Beneath me Katie’s pale body seemed to glow against the foul wet mud, it was genuinely quite brutal….. but also beautiful, it is hard to explain. I knew the scene wasn’t real but I had twinges in my stomach, she looked hurt, and she was my friend, and I had done this to her. So many strange thoughts passed through me as I pressed the shutter and Elbie clung on to my coat. The weather and this scene, it was exactly what I needed to communicate to people. A soft light hung in the drizzle, refracting the sharp diagonals of the trees looming over her, Katie appeared caged, and tragic,  it was perfect. 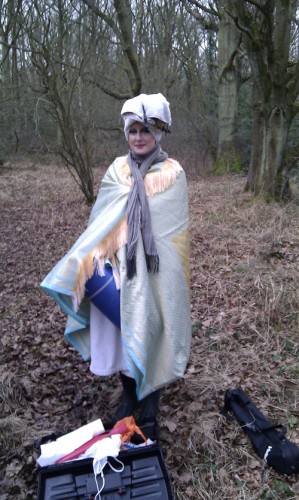 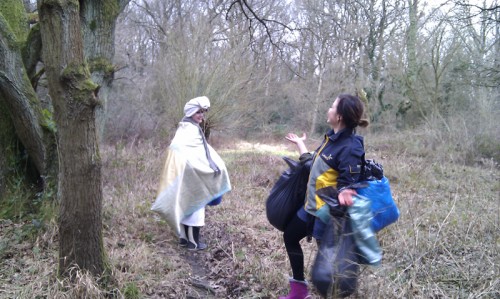 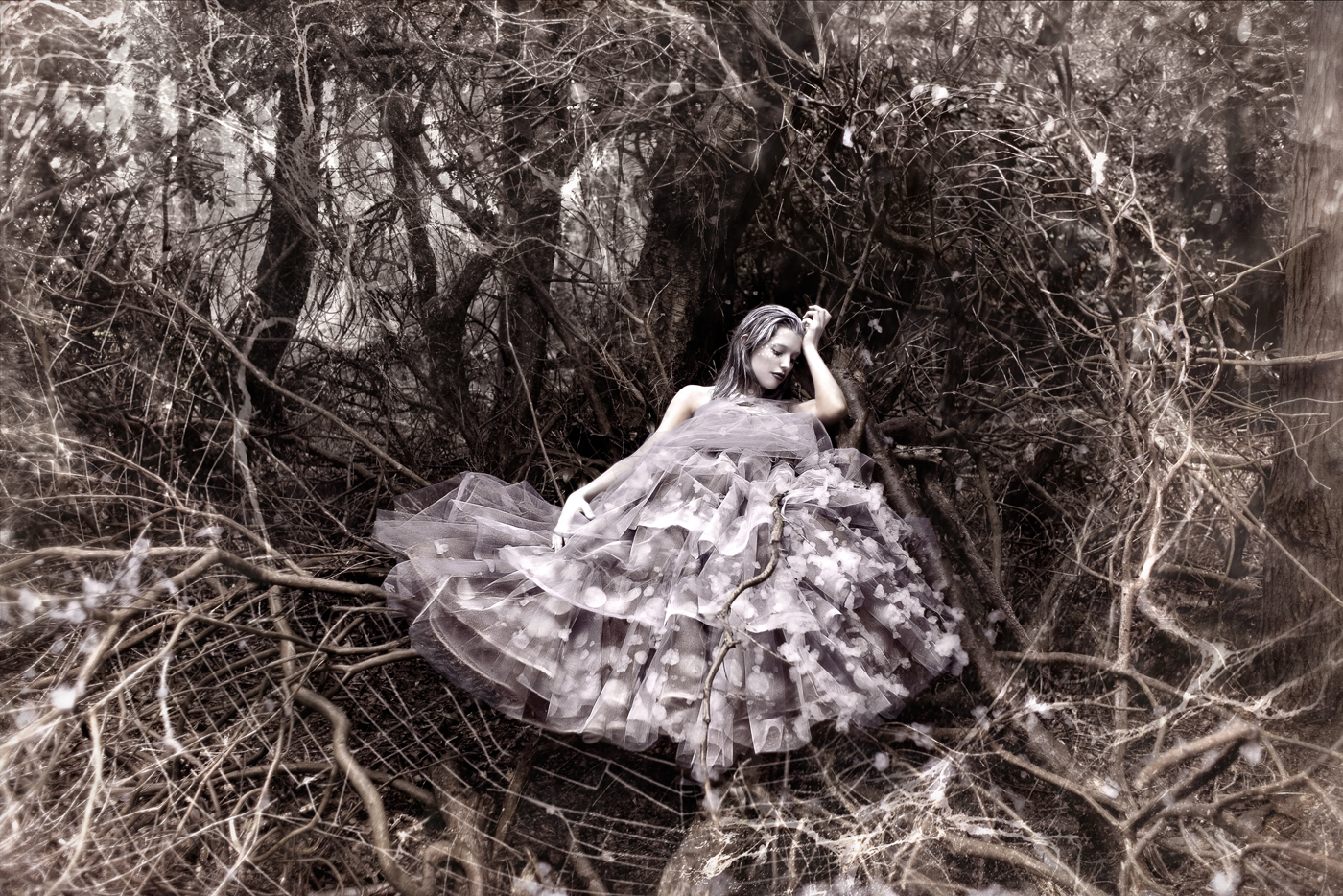 I won’t write so much for this picture, as I feel the message was made apparent enough with the previous shot. Although I hope it is becoming clear that Wonderland has changed since the boat first sailed from the heart of book, through the spell in Moondial, and along the winding red thread that has connected the past scenes. All of it has slowly dragged Katie and mood of the series into a new darker place, something I intended as a truer reflection on where I am in the real world. I hurt, I’m tired and maybe being destructive is my way of dealing with things right now. So I took the sweetest creature, our ‘Foxglove Fairy’ and shot her in a giant spider’s web. I wanted to make a statement that the series wasn’t meant to be a twee fairy tale by any means, and at times it was raw and painful too.

However, having said all of this and sounding so sad, the actual reality behind this quiet, dark, picture, was a riot of noise, smoke and squeals of laughter and this is the joy in what I do. Sometimes even when I’m trying to communicate something that expresses loss or anger, the reality of making these pictures is something that has brought me some of the happiest moments of my life. So despite the mood, this shoot was actually hilarious and was the first time I had ever had the childish delight of using my snow machine.

Helen our model was new to the project, and despite having pre-warned her it could get chaotic, I doubt she ever imagined she would be crushed into a giant web of sharp branches, wearing a shopping bag on her head with foam being fired at her! She did so well, God knows what she must have thought, but I am so grateful for her patience. It sounds disgusting but the foam was intended as a kind of ‘spider spit’ special effect, I wasn’t sure how it would look on the day, but in the end it was so effective!