A deeply personal journal of life behind the camera written by Kirsty.
Previous
Back to gallery
Next
2nd January 2011

Wonderland – ‘The Voyage’, ‘Moondial’, and the ‘Vortex’ 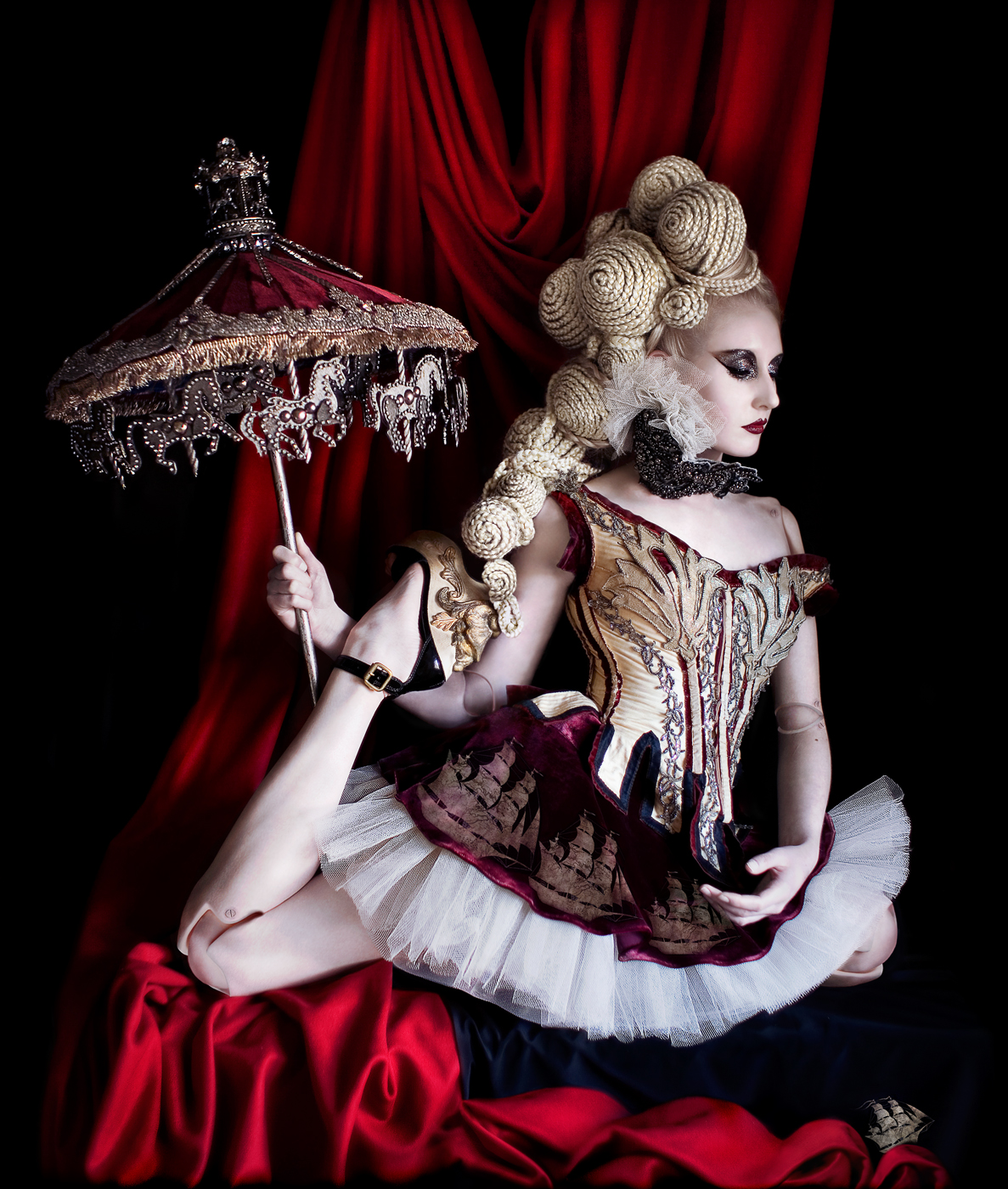 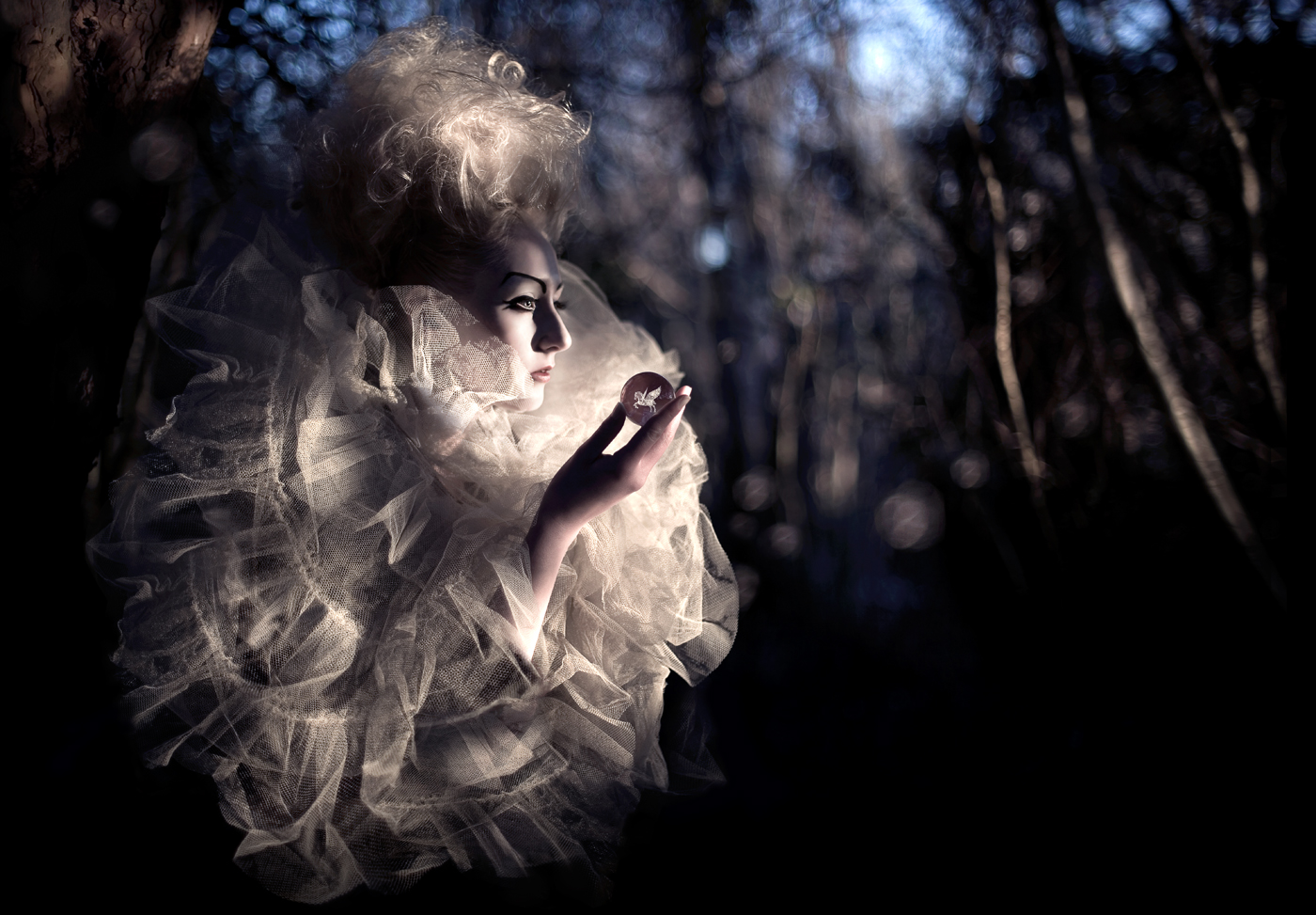 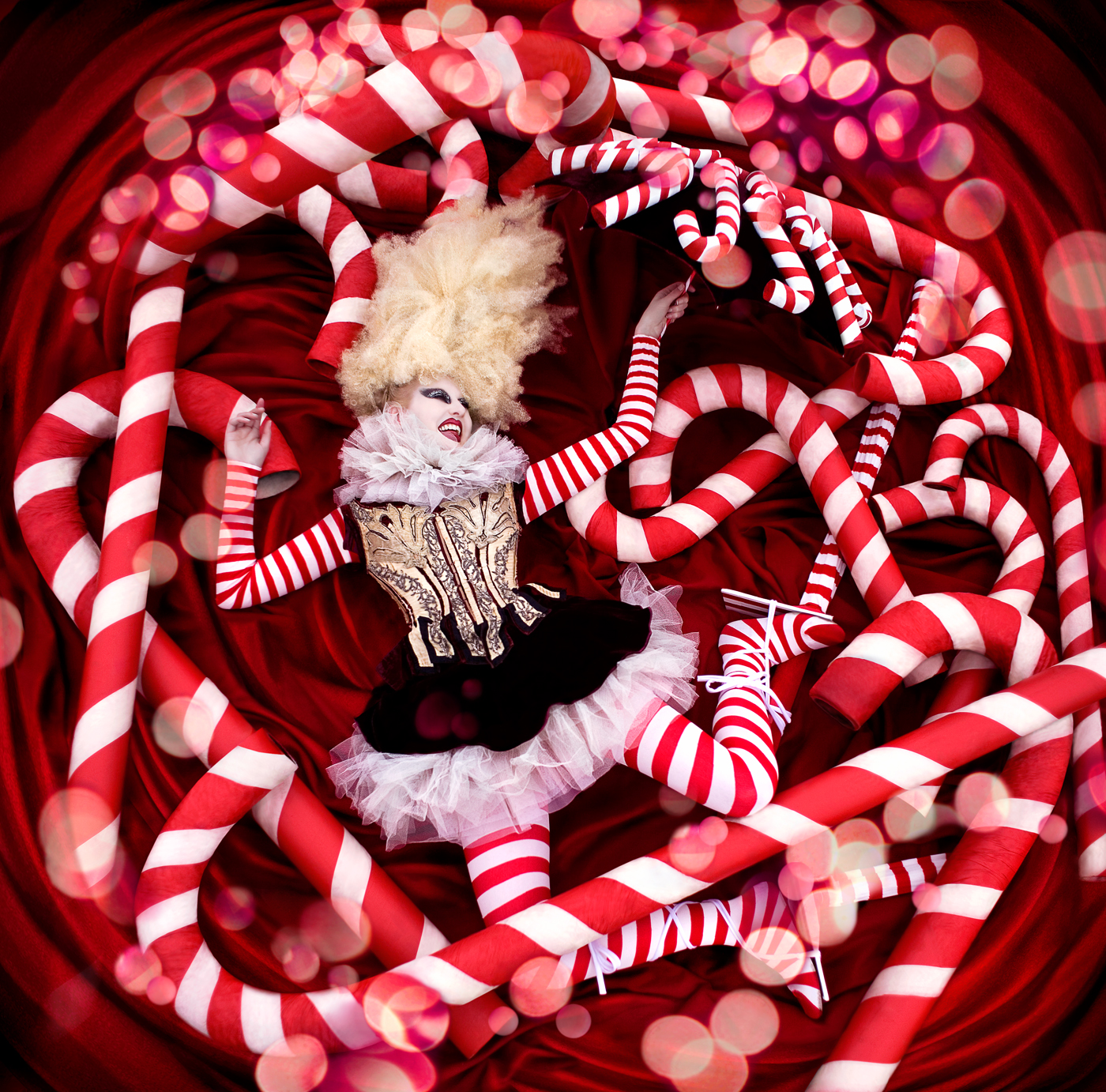 It’s been a while since I wrote and there’s so much to say…….

It is so hard for me to explain these new scenes as I really think this time you may need to be sitting inside my head to fully understand! There is actually a 4th shot that belongs to this winding chain of unconsciousness which I haven’t finished yet, but hopefully you will see there is method in my madness. The last picture in this diary was ‘An Ocean of Tales Until the Shores of Home’, where the galleon ship sailed out from the heart of the book. It was meant to mark a new direction, and so in recognition of that I wanted to create pictures in deliberate contrast to the previous scenes. I turned day to night to dictate a darker tone after all the flowers of the summer. In my dreams there was a change coming, a storm brewing and Moondial embodies that for me. The midnight woods dissolving through the crystal ball into an inky abyss was symbolic of a spell, one which would affect the land and all the characters within it. Wonderland is ‘a story book without words’, never fully explained, but for there to be a sense of time passing, a journey through seasons, and a story you cannot quite grasp, yet it remains faintly familiar like broken memories. I decided to embody this change by taking one of the most extreme characters from the series (The Candy Cane Witch) and to pull her through the spell as a metaphor for this shift. When I first imagined her, I always dreamt of this angry character furiously stamping through the woods in her jeweled costume, raging at the world for being ugly and alone. Like so many heroines her misguided idea of happiness involved dreaming of becoming a more beautiful version of herself. Fairy tales often warn us to be careful what we wish for, especially when the gain is vanity, and it was this downfall of beauty that I wanted to address.

Colour is vital in my work, and life in general. I understand the world through shape and tones, rather than facts and figures, so it has become a language I use in everything I do. I have always connected red to the notion of traveling, the way a red carpet invites us to be walked down, as well as the obvious sense of warning we are all familiar with. I wanted this sequence to be linked through a physical element of colour that envelopes its inhabitants, wraps them and reappears through each scene like a giant thread that stitches each life together. This began with Vortex, where I shot the picture in a field from the top of a ladder and lay Katie on the ground beneath me. I took meters of heavy red cotton and draped it in a giant circle, piling the candy canes from big to small to express a sense of perspective. I wanted her to appear to fall through a spell, like she was spiraling away from her old self in that tiny glass ball.

The following image The Voyage, was intended as her transformed state, gaining her wish to become the beauty she had always dreamt of, only with the cruel twist of becoming a doll in the process: a shallow object for display with bent joints and a hollow heart. I planned to continue this under current in the pictures that follow these, each being linked with the red trails that will slip through their frames. I suppose I needed to express more of the darkness in my heart, sometimes the pictures are about me creating a happier place, when I’m well aware they aren’t reflective of where I am in the real world. I never wanted this project to be perceived as just pretty girls in fields of flowers, and I think its fair to say this is largely responsible for me needing to push a more honest mood in the work I’m making. Maybe this was me shaking off the colourful crazy concepts, its been an escape and wonderful at times, but it isn’t always who I am right now …..Its hard to explain

Regarding props and costumes, I have already shown all the pictures of the original Candy Cane Witch character being created in this older entry – (click )

So for now here are the pictures of the props and wig being made for  ‘The Voyage’ . The carousel parasol was one definitely one of the most intricate props I have made for the series and it took me about 6 days to make. I started with very cheap basic materials, but as my expectations grew, so did the expense and the time taken. I began with an old carousel Christmas decoration and a nasty paper umbrella, both of which I bought from eBay. I covered the umbrella with the same velvet used to make the tutu for the original costume, and painted the inside with glue to reinforce the shape. I had planned to use some gold horse Christmas decorations at first, but realised they would look cheap and wouldn’t feel authentic… so I started researching again. I had set my heart on trying to create a scene like a painting, and cutting corners with the props would ruin the mood. Instead I spent 2 weeks searching the Internet for antique horse toys. Finally I stumbled across an old bric-a-brack shop selling an unfinished toy makers carousel. Somebody had hand drawn the horses onto wood, and sketched plans for the rest of the construction but never finished it. The horses where filthy with missing legs in old paper packets…. they just felt so magical, I couldn’t believe my luck! 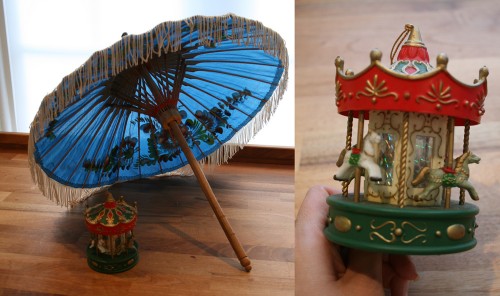 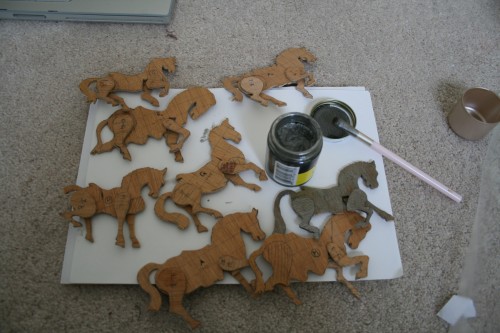 I repaired the horses, and tried to match up the missing legs.  I then painted them with a dark antique silver enamel. It took a long time to do, and I was worried about how difficult it was going to be to make this prop look how it appeared in my head….. but there was something so wonderful about finally finishing this mysterious persons project they had started so long ago. I wished I could tell them that I was going to make their horses come to life, and finally make them dance on a carousel after all those years sitting in the dust 🙂 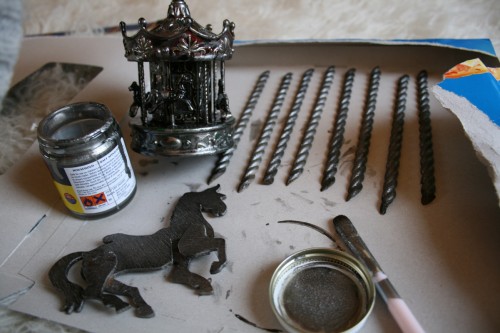 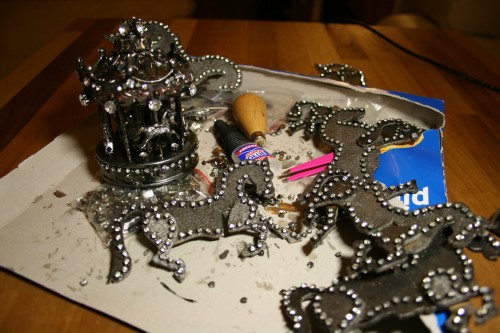 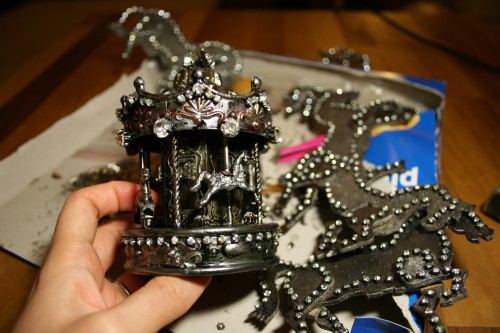 Once all the horses and the toy carousel decoration were coated with the enamel, I sat down to decorate them with glass diamante stones. This was so painstaking, it took me 3 evenings to finish them and I completely ruined my poor hands with superglue, but it was worth it in the end! Finally I bought some decorative wood strips from a DIY store, painted them and attached the horses to their new poles.

For the rest of the umbrella I wanted to make it look like the roof of a carousel, and ended up having to go to a vintage fair to buy antique silver military braid. It was expensive but was exactly what I needed to pull the whole idea together. I attached the carousel toy to the peak of the parasol, added more wooden strips, sewed on the braid, and ended with fixing the horses in position. It was a labour of love, but I was so glad I pushed through all the hassle to finish it. 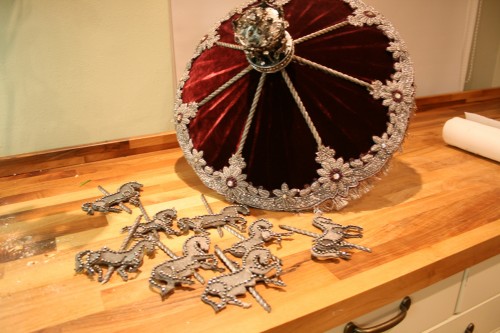 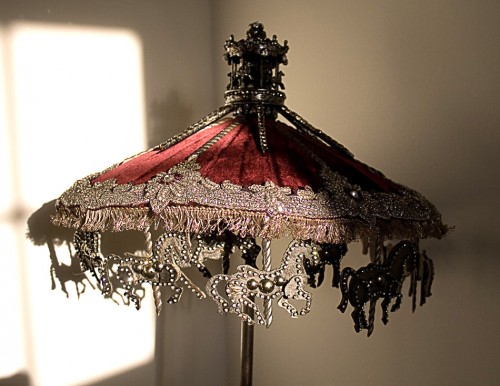 Now the main prop was finished, I then had to work on the changes to the candy cane witch character – how she would look as her new ‘perfect doll’ self. Because her hair had originally just been an explosion of wild frizz I wanted to create something very controlled that would look almost carved. The idea of circus was already very clear in the characters concept, so I began thinking of juggling balls and performing ponies. I suppose the overall shape was a cross between the plaited mane of a circus horse, and juggling balls made of hair! Elbie and I agreed on covering balls with plaited hair extensions and then attaching them into Katie’s own hair with wire and more braiding. Elbie spent days creating all the plaits and then pinned them into coils the night before the shoot. For an extra sculpted look she painted dark lines in between the plaits to give them added depth. 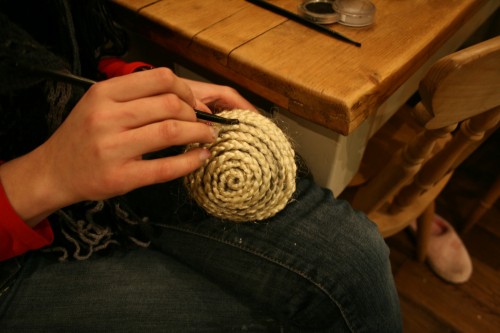 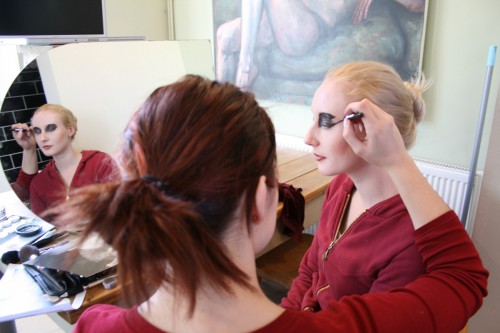 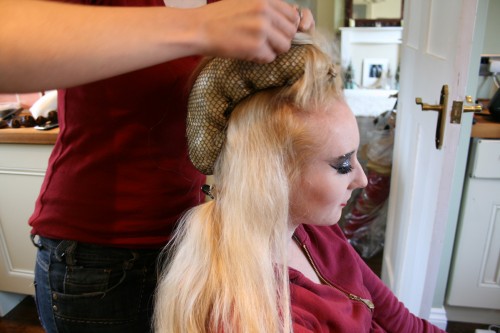 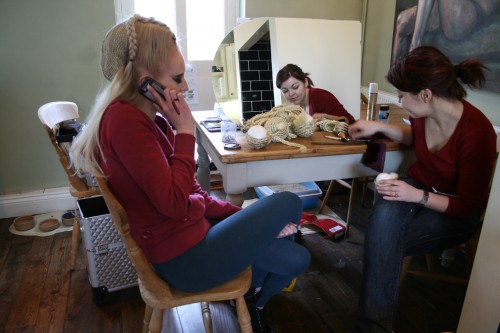 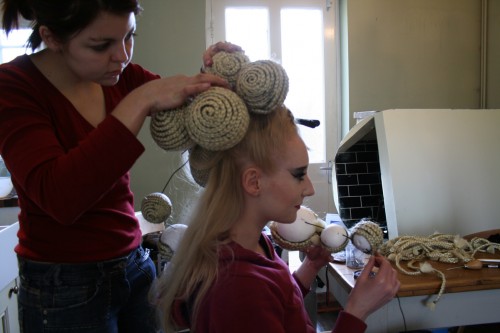 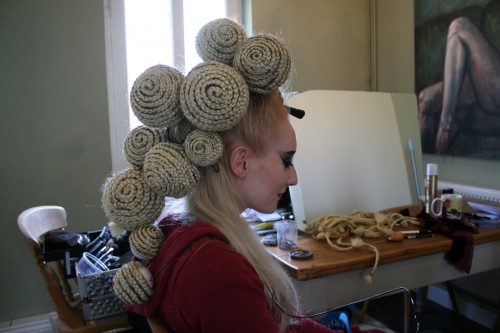 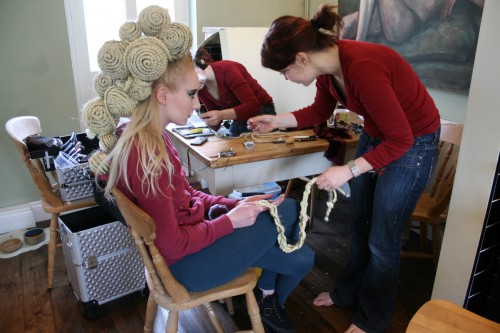 The hair and make-up took absolute hours to create. Elbie and I were both trying to attach the balls to Katie at the same time to speed things up, but it must have still taken around 3-4 hours to get it all finished. Its at times like this when I love working with Katie and Elbie so much – Elbie always beautifully translates my ideas exactly how I see them in my head, and Katie has the patience of a saint, we always laugh loads and stuff ourselves with tea and toast during the preparation. I’m so grateful to have them as my friends through all of this, they are both such wonderful people.

The other final change was the neck ruff. originally she had worn a giant crazy clown ruff, so that also needed to be refined. I used some beading offcuts I had designed for one of my dresses earlier in the year and glued it to horse hair canvas for the base . The heart breaking thing was that when we got Katie dressed, the ruff was too much, and I had to chop it to pieces at the very last minute, it took so long to make and was in 3 bits by the time I took the picture…. but in the end everything looked beautiful so I can live with it I guess! 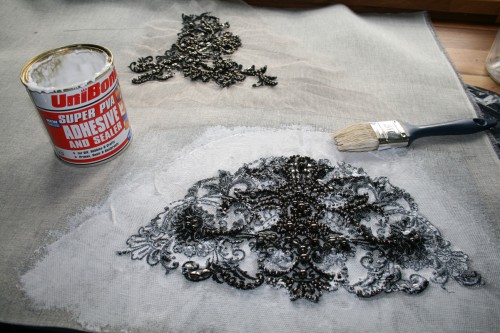 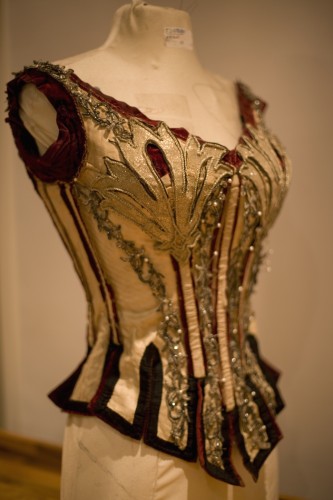 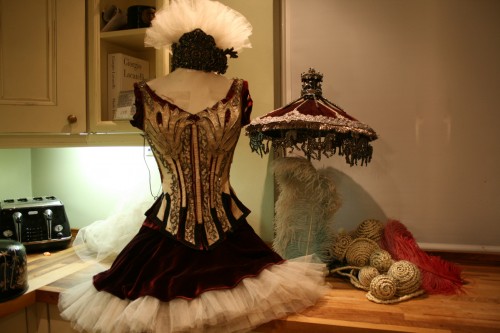 The actual shoot for The Voyage was one of only 3 pictures in the entire Wonderland series to be shot indoors. To be honest it was actually shot in my bedroom! So for all those people who feel they can’t produce picture without professional surroundings, this may give you some hope! I’m always honest about what I do, so I’m just going to show you the basic set up we used (oh god, cringe!) 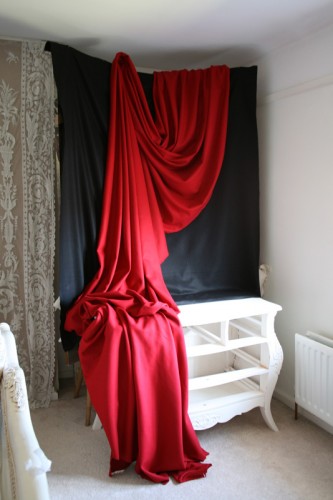