A deeply personal journal of life behind the camera written by Kirsty.
Previous
Back to gallery
Next
24th October 2010 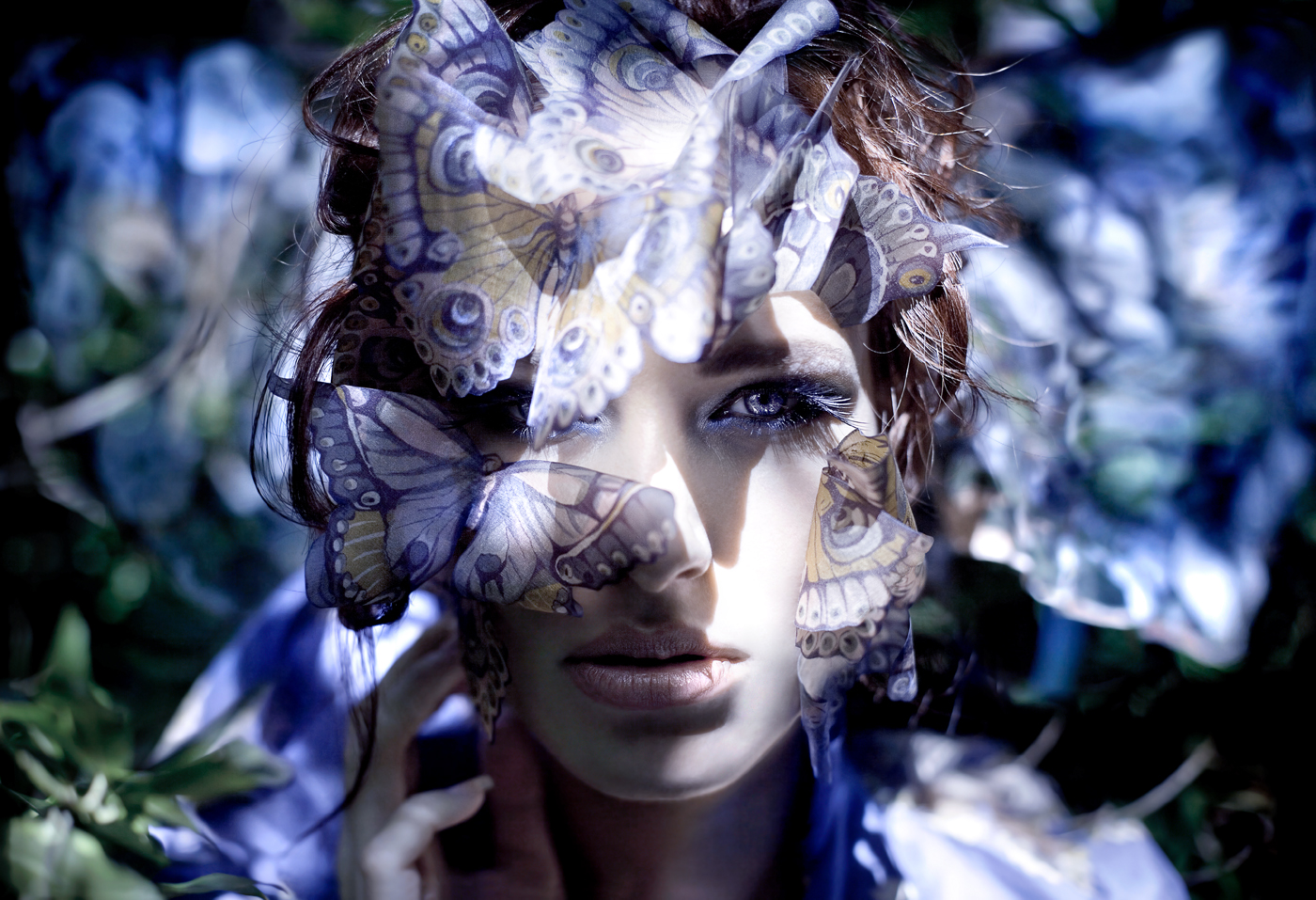 Finding the ‘Secret Garden’ location was a total accident, It was a place I would never have come across if it wasn’t for the kindness of a complete stranger. It all began back in June when I was searching for a poppy field and I had posted a plea for any sightings on a local website. Amongst the replies, I received an email from a lovely woman called Ros Allen, she told me about her garden, and the wild flowers that grew deep in its heart and although they weren’t poppies, she suggested I pay her a visit to see what I thought. 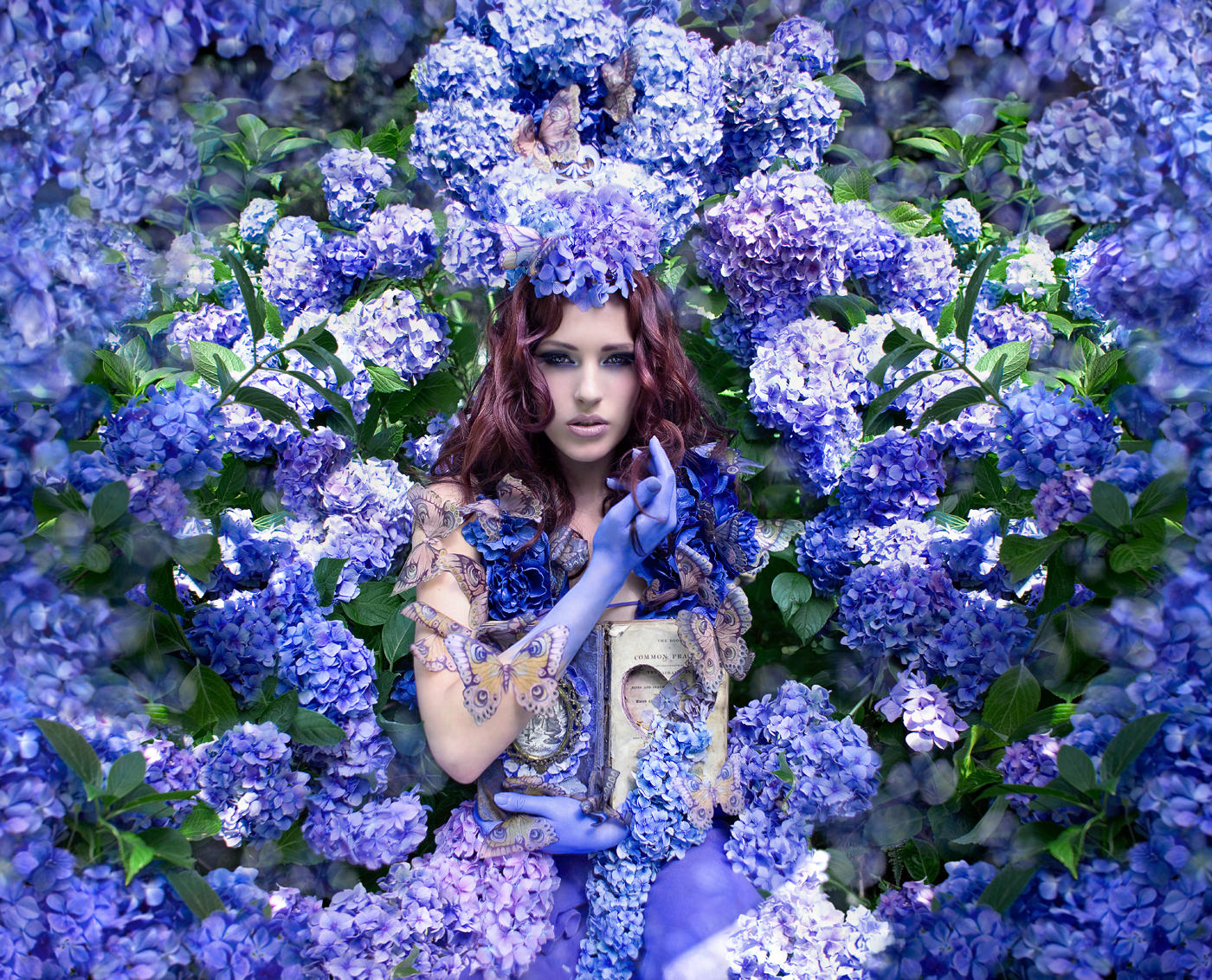 Ros lived in a small village about an hours drive from my house, and within a week I found myself standing at her gate. As we walked into the shade she explained how they had bought the house a few years before, from a very elderly woman in her late 90’s called Elsie Streeter Durtnall, who had owned the cottage and its surrounding land for decades. Elsie had spent over 50 years creating a hidden woodland garden, a patchwork of flowers and shrubs that wove through the undergrowth, blending into the trees.  As the years passed she had kept a journal of all the flowers she had sown, and the ones she planned to buy, carefully mixing each colour effortlessly with the existing wilderness. Nothing appeared planned, there were no neatly designed flower beds, or shaped borders, it was as if she had spread the seeds with the strokes of a paint brush. Ros had inherited the garden and the journal with the cottage, and over the months she began to discover how the colours changed throughout the seasons, starting with a blanket of white snow drops, through to the explosion of blue hydrangeas in August, it was a truly magical place. At that point the location wasn’t right for the foxglove picture I had been preparing for, but I was so in love with the garden and its story, that Ros promised to let me know when the hydrangeas would be in bloom.  Apparently the bushes were huge, and they were a perfect China blue (my favourite type).

Weeks passed, and all of my time spiraled into preparing for my website launch. I decided that if Ros did get in touch, I was going to have to forget the shoot. I had no one to help me, and by then I was absolutely exhausted. However, as always I couldn’t help myself, when the message came through, and I spent 3 days struggling to throw a costume and props together, completely on my own.

My starting point was remembering the secret little twists and turns in the garden, I imagined the characters hiding in the flowers, and wanted the viewer to feel like they had stumbled upon these creatures themselves. I began creating the props and the dress focusing on silk flowers, butterflies, and the idea of a story book that bled petals from a cutout heart which I would positon over the models own for the picture. 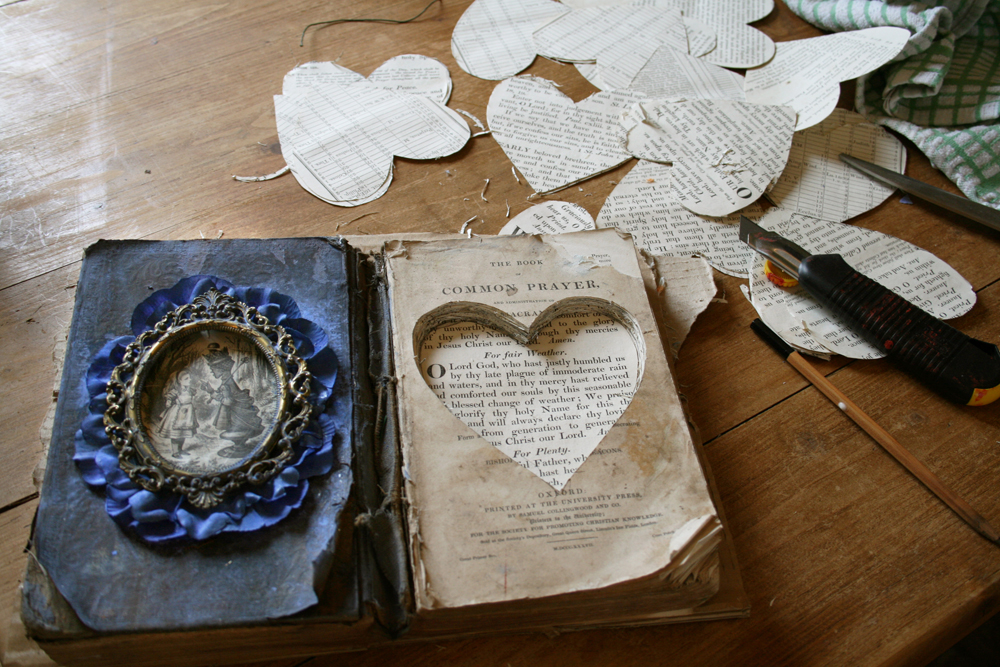 I began with an old faded copy of ‘Through The Looking Glass’ which I had found amongst the books from the bluebell ‘Storyteller’ shoot. Inside there were some beautiful illustrations, so I chose one to set into the cover of a damaged book and finished it with a brass Victorian frame and  dried hydrangea petals for decoration. Next I cut a deep heart from its pages and began making my stream of flowing petals from its center. This was a disaster if I’m honest. I thought if encased freeze dried petals in glue they would keep their colour and shape forever. Instead the glue didn’t dry for 3 days, and I was faced with a puddle of very expensive brown mush!

Feeling a little deflated I then began the headdress. Without the help of a second person it was really tricky trying to glue it together whilst wearing it myself to make sure it would create the right support. I burnt most of my fingers with the glue gun, and broke the structure twice, Things were not going well! 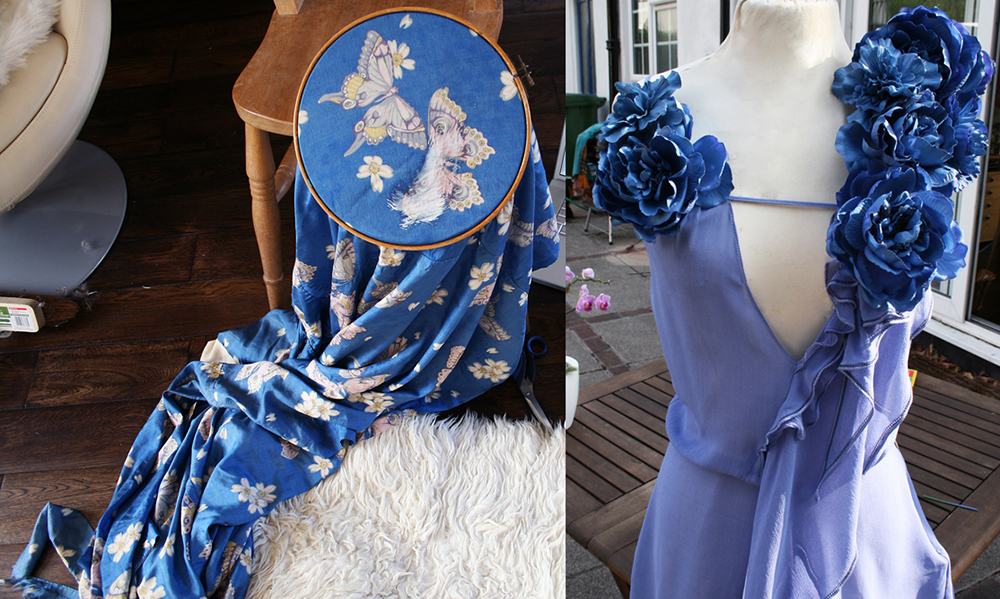 Finally, due to lack of time I over-dyed a dress I had previously made in a matching blue, and attached hand painted silk flowers, and some silk butterflies I had made from a vintage kimono right at the last minute. The whole prep had been a bit of a calamity but I’d managed to pull together a costume and concept despite all odds. Now I just need it to stop raining!

The day of shoot arrived, Natasha was the very first model I had used for Wonderland (our Lavender Princess) and It had been over a year since we had seen each other. This time she brought her mother Kim along to watch, and the whole morning was wonderful. After days of rain, unbelievably the sun shone and the weather was perfect, we were so incredibly lucky. 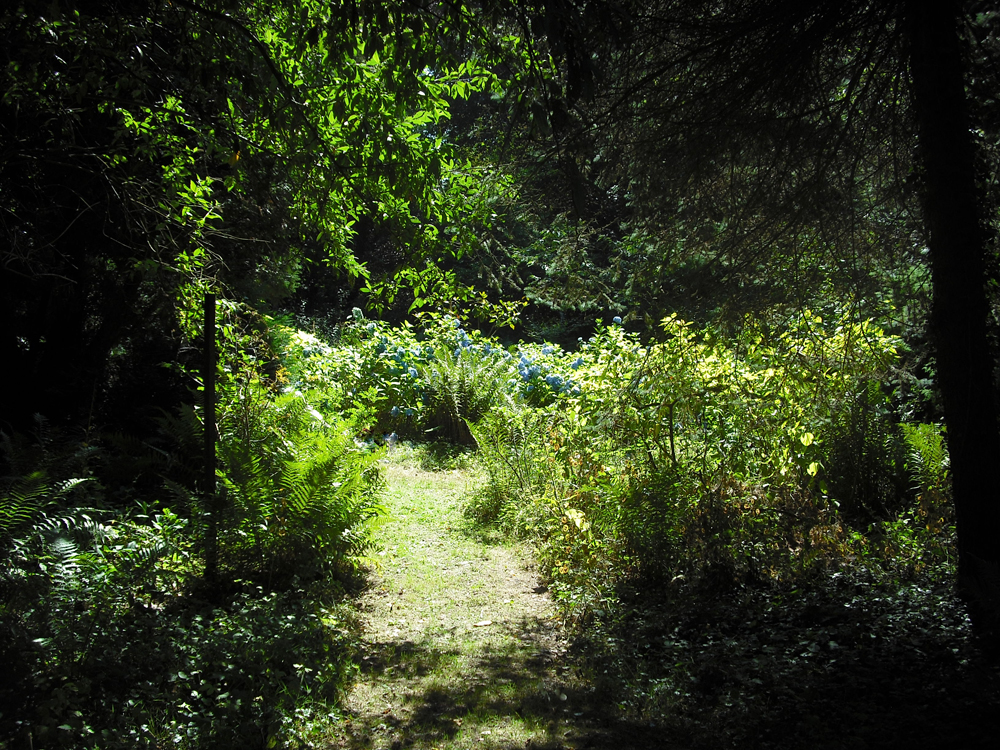 When we arrived Ros led us towards the promised enormous hydrangea bush, I wish I taken a proper picture of just how incredible it was, but we were so concerned about time and the weather changing that we just threw ourselves into work without thinking to take a proper picture to show just how many flowers there were. The colour was stunning, no one could believe it, some of the hydrangeas were as big as cauliflowers, and their blue was the purest I had ever seen. 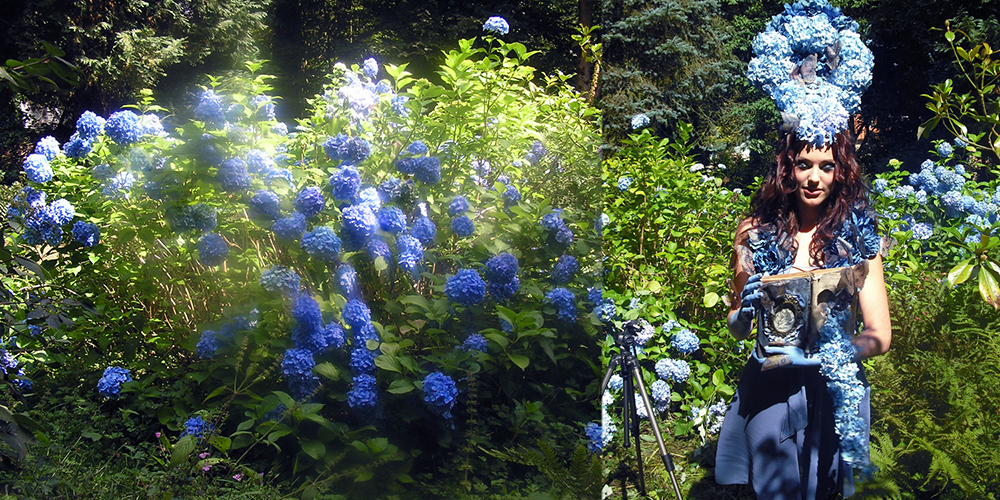 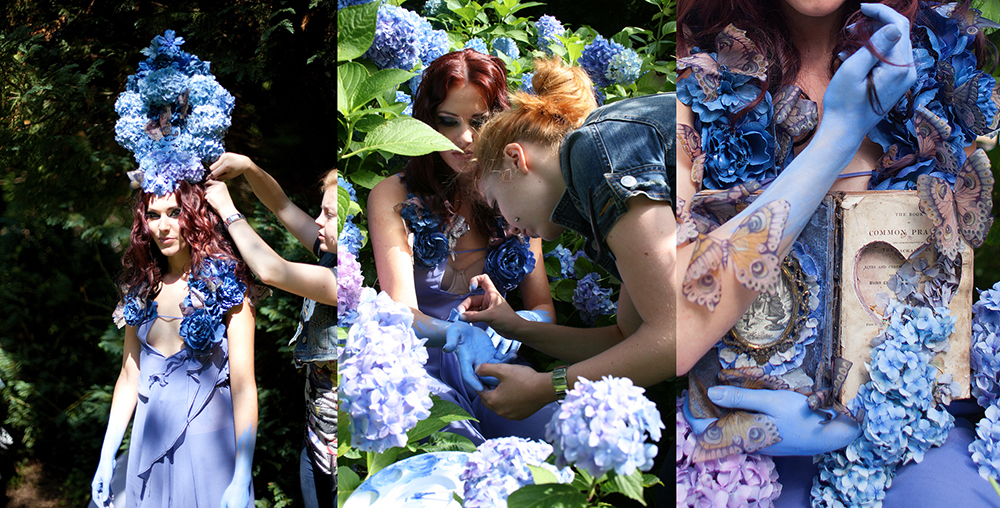 Once we set up a base, I solved the books ‘petal stream’ problem by sewing fresh ones over the semi dry mush. I then positioned Natasha on a chair which we dug into the ground, allowing her to sit low, whilst the surrounding flowers towered over her and blended into the headdress. Elbie and I then used wire to knit the stems of the flowers closer around Natasha, to create a corridor effect. Elbie painted Natasha’s arms and hands blue, and then we were ready. 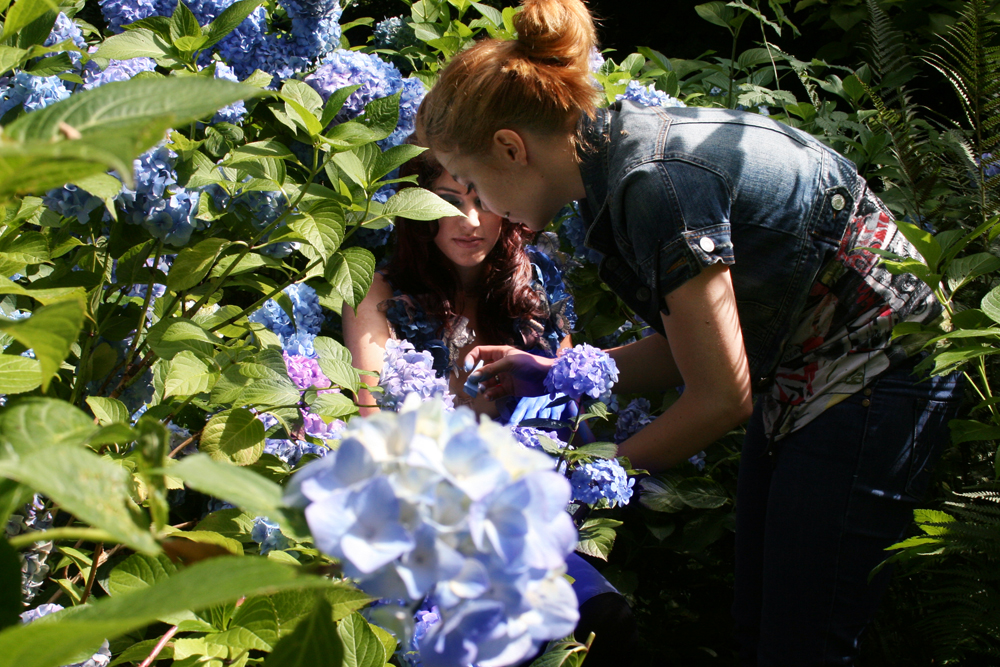 I think it must have been one of the most relaxed pictures I have ever taken, there was something so precious and warm about that place. Crouching in the flowers I could hear the voices of Ros and Natasha’s mum gently drifting over our heads. The sun was so warm we were all stripping off, and I remember the constant velvety brush of the hydrangea petals against my skin as I backed deeper into the leaves. After I had finished the main picture I decided to attach some of the thin silk butterflies to Natasha’s face and walked her deeper into the trees for her close up. We crouched down in the shadows and I shot her on my knees. The low aperture made the background swim and melt into a strange kaleidoscope, capturing a surreal fairy tale mood with an intensity I wasn’t expecting and I now find really powerful and love. Everything felt slow and calm, it was so different to how the shoots often are. 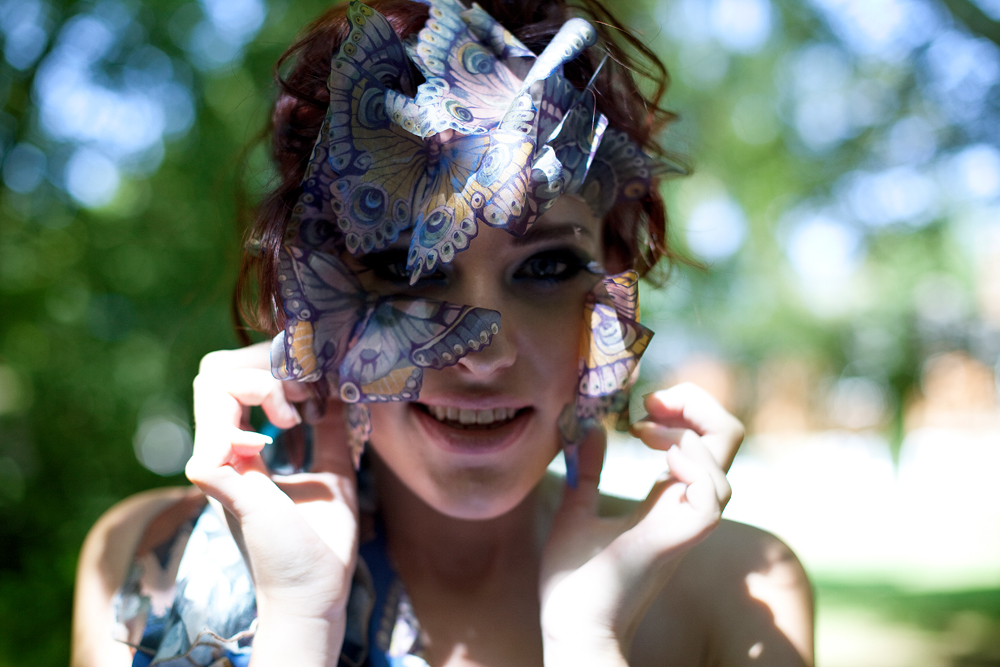 For me this garden had such an underlying tenderness it is hard to explain. I somehow felt comforted by it, and this is where I should explain why. Sadly a few weeks before our visit, Elsie the old lady who had sewn the garden passed away at the age of 97 in the nursing home she had left the cottage for. That morning when we had arrived Ros told us of how Elsie’s family had come from America for the funeral, and had chosen to cut bouquets from the garden for the church instead of buying them from a florist. Her ashes were scattered in the garden under the beech tree she had grown, which the first thing she had planted all those years ago. The seedling for the tree had been taken from the churchyard where Elsie was born, I felt this was such a beautiful circle of life, a beginning and an end with nature, which is exactly how I see the loss of my own mother.
I took my time with the pictures and hoped that somehow Elsie could see what we were doing, and know that through the photographs that her flowers would go on to be admired by people in different countries all over the world. I thought of mum, this whole project, and how I am so often left speechless at how we seem to find ourselves led to these special places of deeper connection.