A deeply personal journal of life behind the camera written by Kirsty.
Previous
Back to gallery
Next
19th September 2010 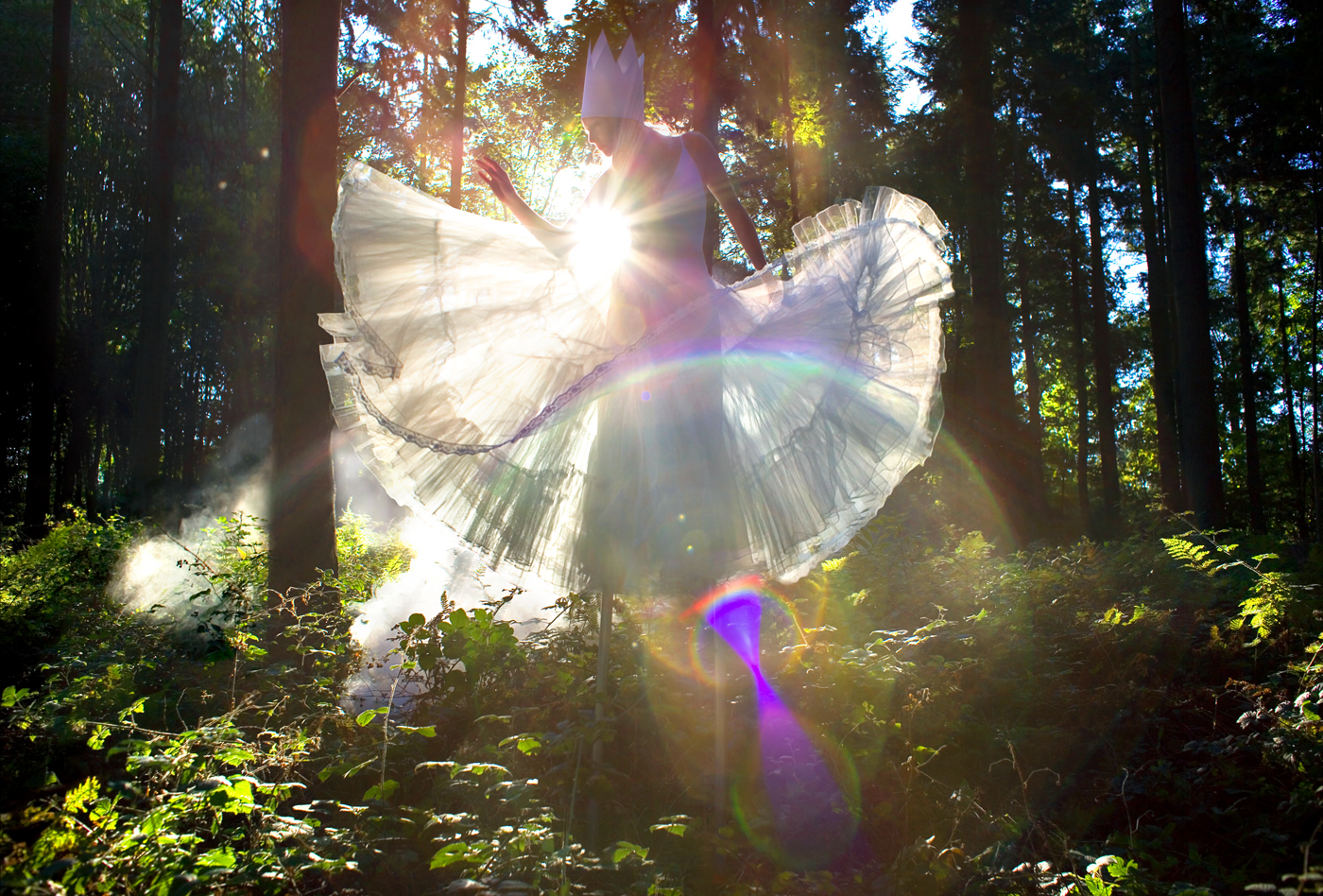 Sometimes, all I need is a day like this one, to remember just how beautiful the world truly is. A day like this makes losing mum bearable, because of the friends and moments I will keep in my heart forever. Over all the months we have been shooting the project I think this was my favourite scene so far. This picture deserved its own separate entry because to understand it, you had to have been there, and the only way to share this properly is with a lot of behind the scenes photos.

It was just the four of us, no lighting effects, no reflectors, just us stumbling through the woods, shouting and whooping at the dawn. This is how it is to soar, to know you are alive, stripped of the bullshit and the endless insecurities that wear heavy on our souls. To experience what is real and wild, and so incredibly powerful.

Writing this my eyes are filling up simply because I can never remember seeing the sun like that. Standing there in that corridor of light, was like a kiss on the forehead from my mother after almost two years of feeling nothing. We were awake at 4.45am; I hadn’t even brushed my hair, the roads were pretty much abandoned, and the wood was silent.  Adam and I wrestled with the generator we had brought that refused to start. I had planned to fill the scene with artificial snow, but looking back now it was almost as though we weren’t allowed, It would have been wrong. Our frustrated attempts shattered the silence, the motor spitting and groaning, whilst we did pretty much the same. In the distance Elbie was helping Katie into her costume, and the whole time my pulse was racing, part adrenaline, part excitement, part terror that the incredible light would go.

I had been dreaming of this shot for so many months, and every time we had tried to capture it the dawn light had never arrived.  It was the 12th of September, the summer had been short lived, and the autumn was closing in. It had been raining constantly, and this was realistically the last chance we had. It was a complete gamble choosing the location, for the past week I had been out at sunrise on my own trying to find where the sun would appear in the right type of place, but it had always been dull and overcast. I expected we would have to walk for miles until we found a suitable spot, but as we pulled up the dirt track to the forest we could already see the sun slicing through the trees in great shards. I stopped the car, threw open the door and ran towards the light, the thorns scratched my legs as my feet tangled in the undergrowth, I was breathless, this was it! Everything I had so desperately hoped for. I stopped when I reached the center of the trees, the sun was warm on my skin, as insects skimmed the ferns fracturing the glow around my hands. I was bathed in the brightness, whilst the rest of the world melted away into darkness, it was incredible……… 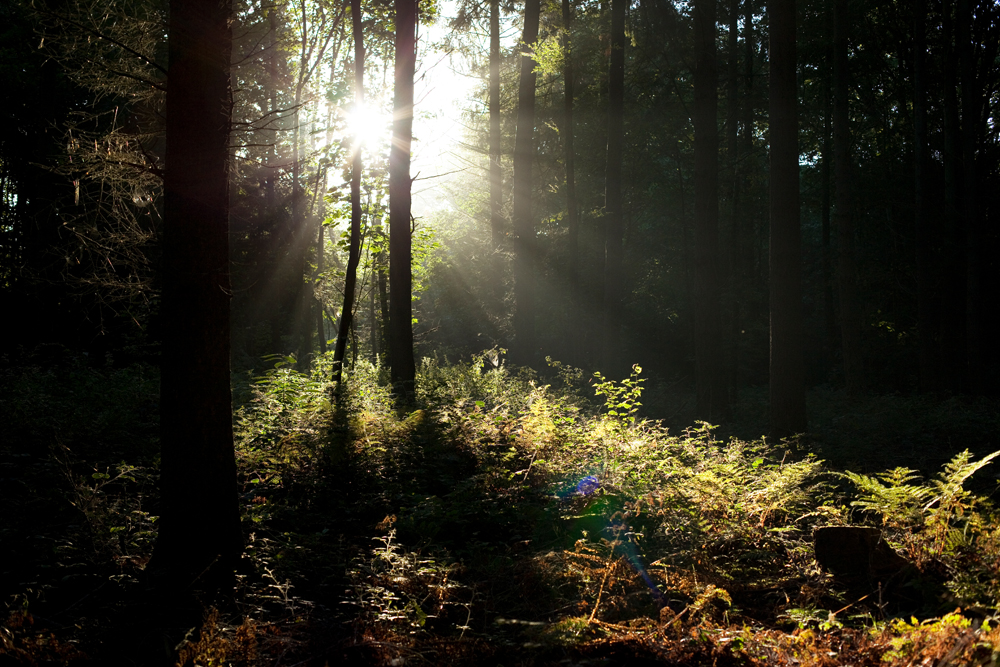 After 15 minutes of wrestling with the generator, I had become so distracted that the scene was almost forgotten. I hadn’t heard the shouts from the girls in the distance, and didn’t realise Katie was ready, until I turned and saw her slowly loom above the undergrowth holding Elbie’s hand for support. She must have been 9ft tall as she strode towards me through the shadows, the light slowly crept across her, revealing her tiny frame balanced high on her stilts. The giant tulle skirt lit up like a lampshade, and there perched on her head was the paper crown Elbie had made the night before. 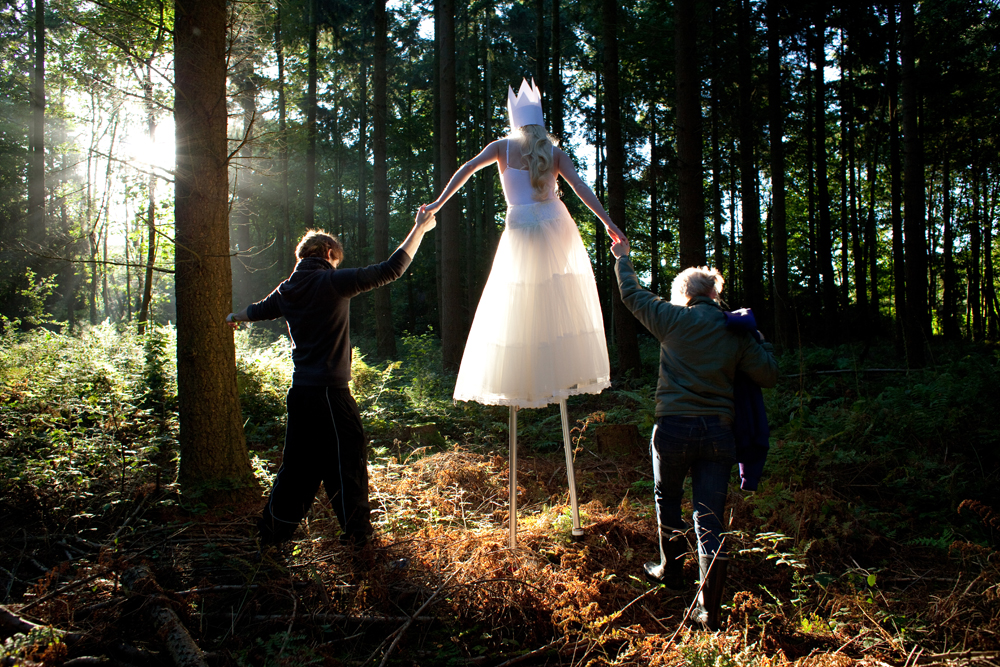 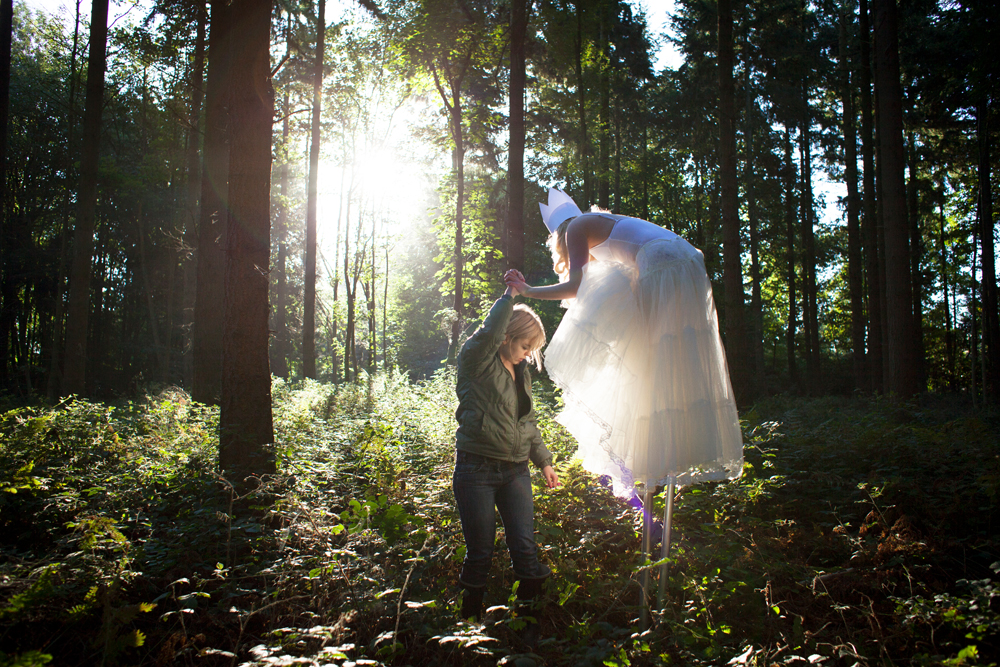 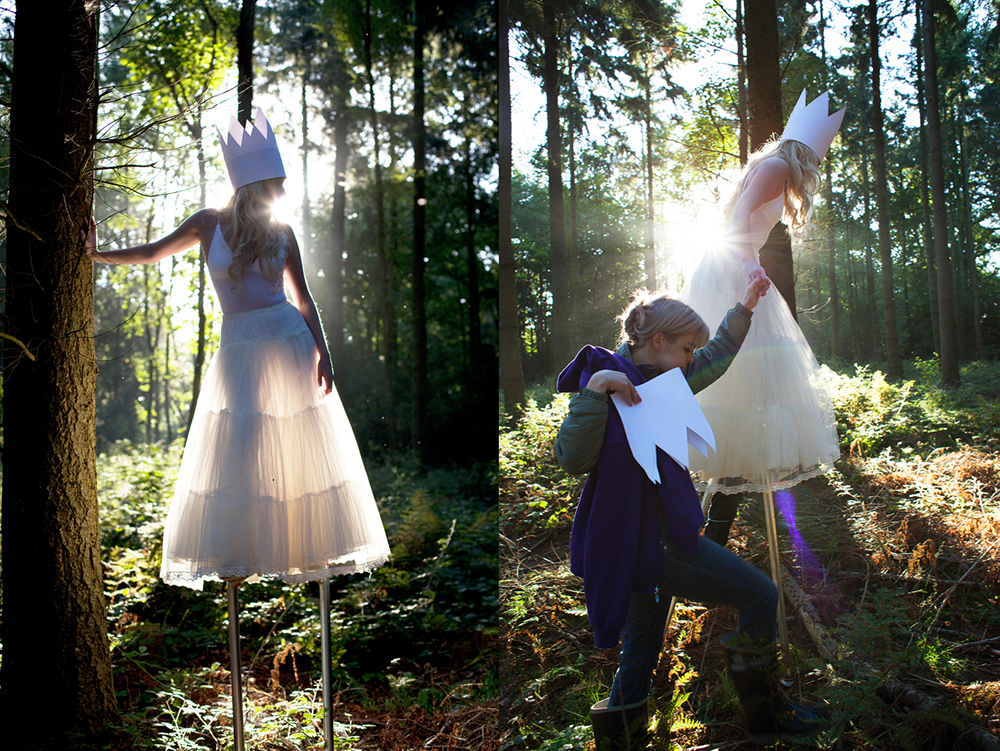 It was a sight I’ll never forget; my dream was alive and walking towards me, exactly as I had seen it for so many nights. The light was finally here, and she was real, I couldn’t believe our luck!  We gave up on the snow, and I began taking test shots whilst Katie got used to tackling the roots and vines that constantly knotted around the base of her stilts. She nearly fell several times, and all the while the light was rising and shifting. It was difficult, the image I had dreamt of involved Katie spiraling around with her arms outstretched in a scene filled with snow and light. Instead I had Katie struggling, no snow and I was running out of ideas.
Then from nowhere, Katie turned to me and threw the tulle of the skirt outwards with a deep sigh of frustration, the sun suddenly burst through the sheer layers creating a giant halo of light around her whole body. My jaw dropped, and I began shouting, ‘again!….Katie for god’s sake do that again!” Suddenly there was magic, movement, that ‘something’ we needed, everything transformed. After a few shots I remembered packing some white smoke bombs, so we dug them out and lit them deep in the ferns, and finally, it all began to fall into place. 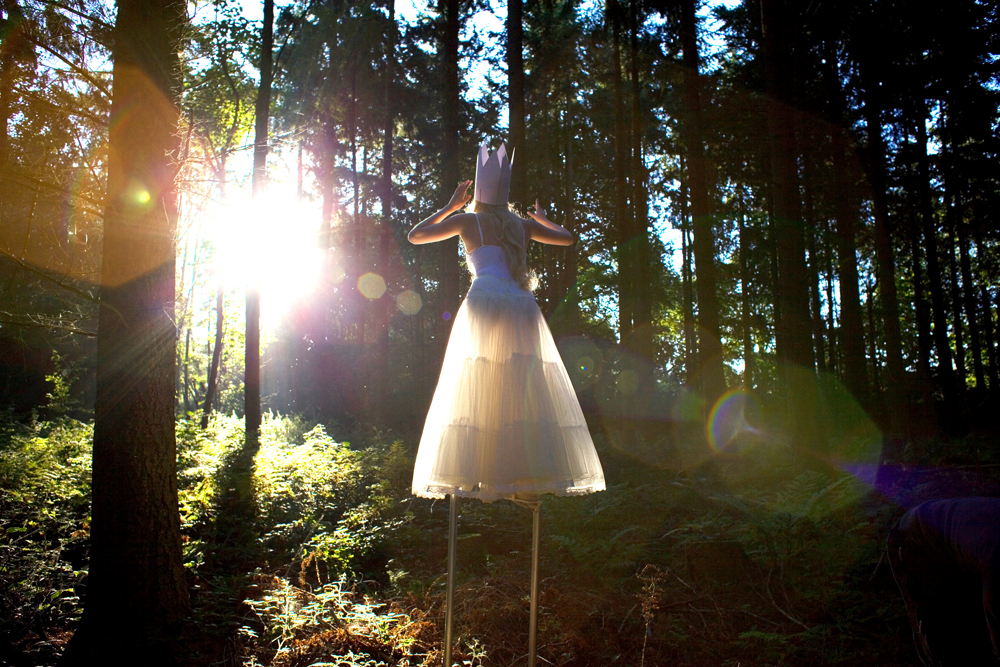 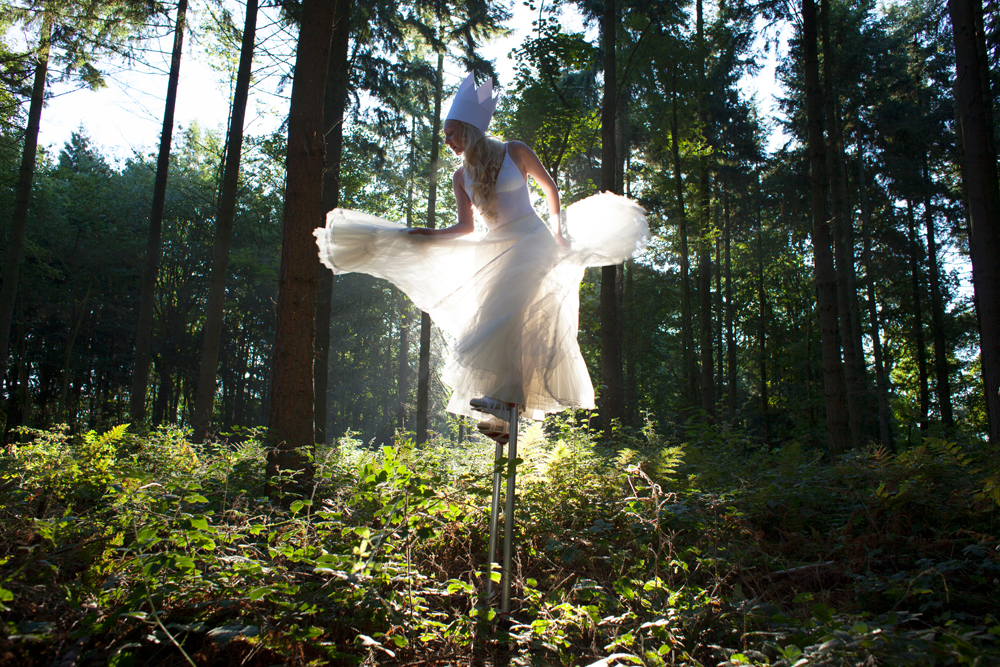 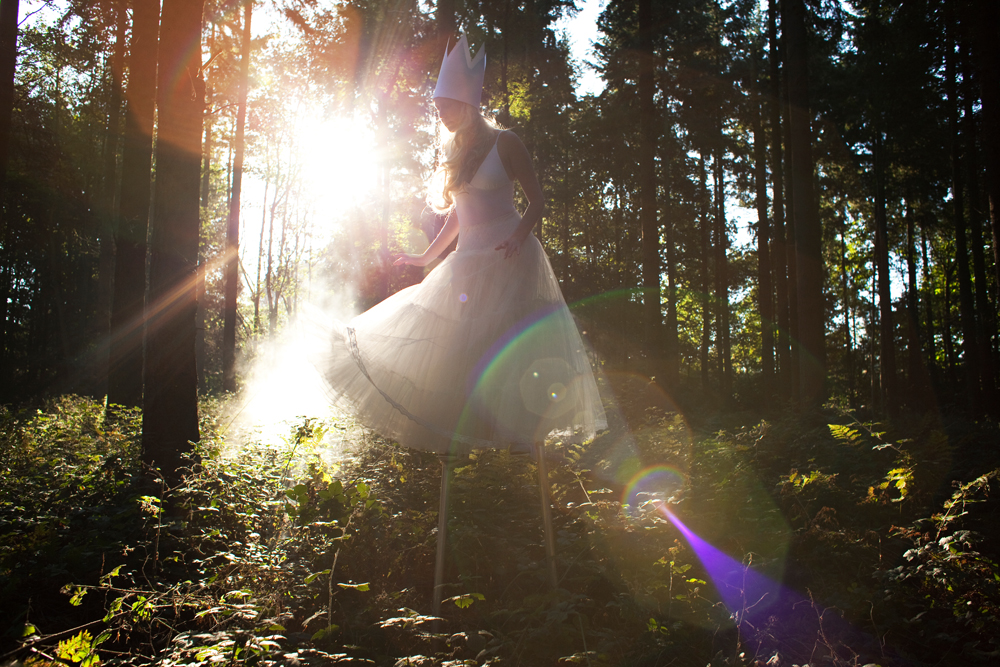 Katie twirled and spun the layers of tulle through the rays of light, whilst the smoke fizzed and plumed upwards into the silence of the disappearing dawn. My heart thudded in my chest as it all danced in front of me, it was so incredibly beautiful, and all of it was real.

It is moments like these when a slow, strange, bitter-sweetness washes over me, standing there in all that wonder, I couldn’t help but think of my mother. I know full well that without losing her I would have never been there, discovered that place, experienced that dawn, or found my new precious friends and it’s an overwhelming feeling. I have lost, but I have gained so much too, and I am so genuinely grateful for that. I stopped and put the camera down, we had got it, I felt pretty drained but so, so happy. Katie’s prism was broken, the smoke dissolved, and we all laughed as she staggered to the nearest tree groaning as the paper crown slipped down over her eyes. Elbie and Adam helped Katie to the ground giggling as she was dragged backwards through the undergrowth; whilst I stepped away from the light and played the pictures back to myself. It had all happened so quickly, I wasn’t entirely sure what I was going to see. Some of the images were very dark, some where just the shapes of the skirt lit up like giant abstract circles, and then at last, I came to the picture I chose for the final shot. Somehow, some way, I had got it. There were lens flares, sunbeams, smoke, all of the elements at once!  It was exactly what I dreamt of, I had goose bumps and tears pricked my eyes.
I know I often say it in these entries, but sometimes you really don’t need anything more extraordinary than nature itself. Wonderland is as real as you want it to be, we are surrounded by immense extremes, fields of flowers, ancient trees, wind, rain and the dawn. So much of it is out there, and I know that for me finding these elements is truly the heart and soul of why I love this so much. I turned and ran over to the others still laughing at Katie in her crumpled heap. I have never had such a strong love of the behind the scenes pictures as I do with these, there is a real tenderness in them, that I care about and will always treasure. This really wasn’t a ‘shoot’ is was fun, it was magical, it was a very precious memory that I have in pictures from start to finish, and I will remember for the rest of my life. This is what makes me feel alive, I felt like I could have howled at the sun and stamped my feet in gratitude to have felt the way I did that morning…. It truly was how it felt to be a ‘Wild thing’. 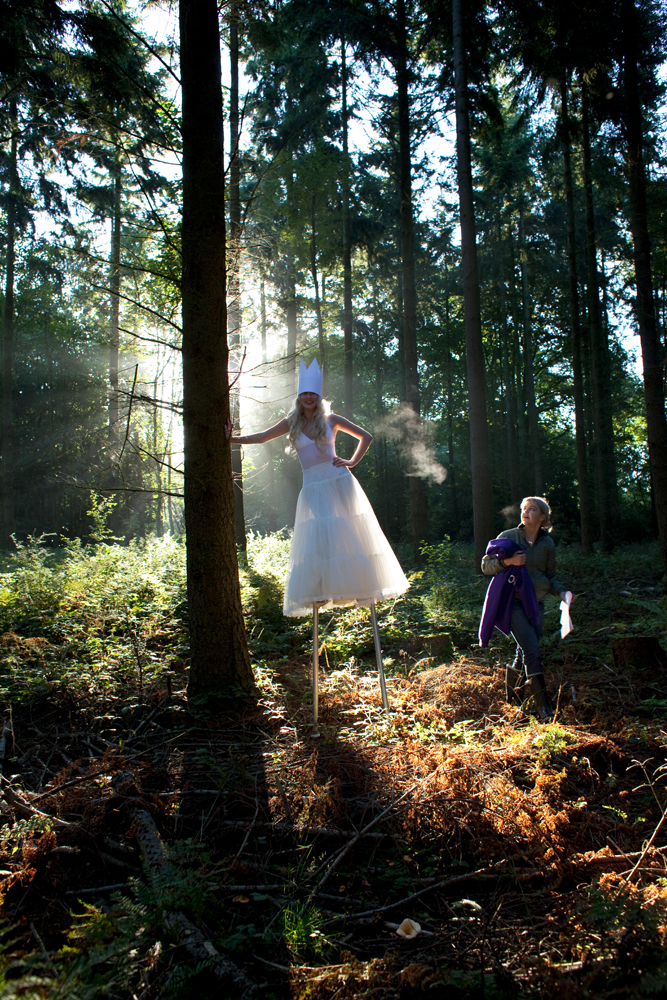 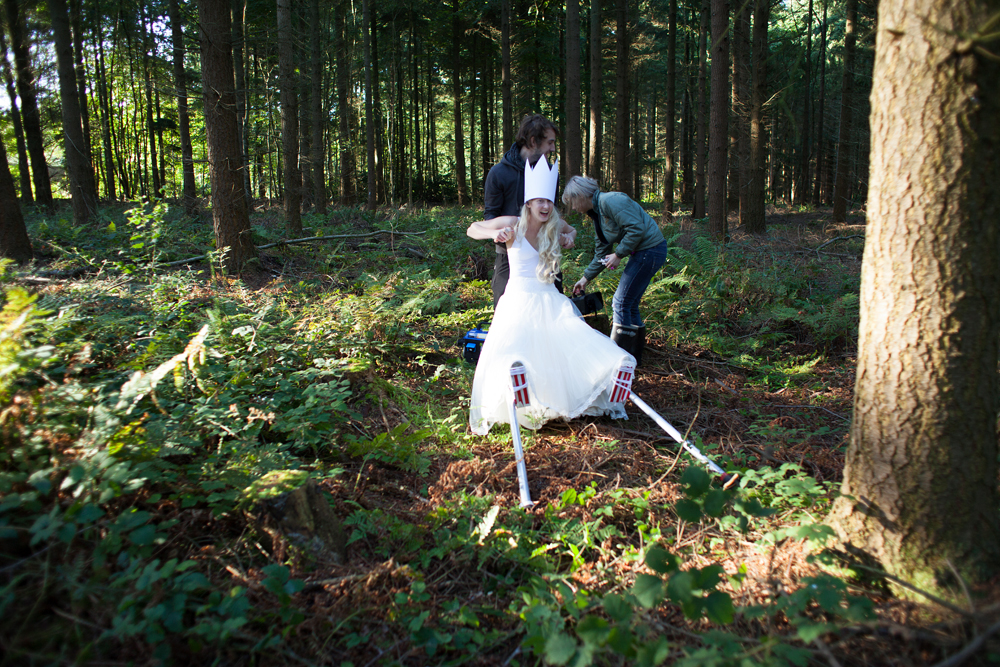