A deeply personal journal of life behind the camera written by Kirsty.
Previous
Back to gallery
Next
4th August 2010 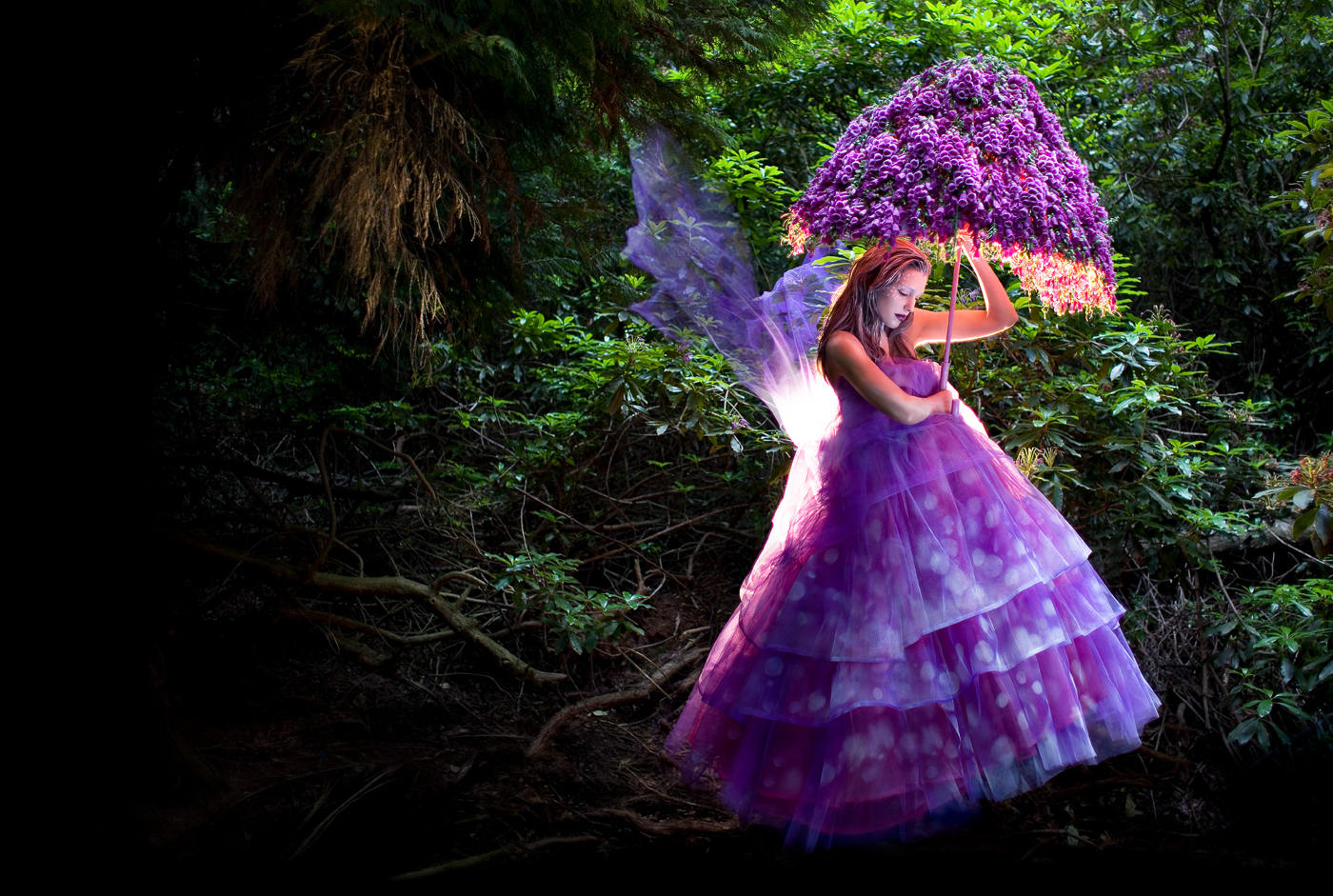 It’s funny how sometimes you get a picture that is unlike anything you originally planned. ‘The Foxglove Fairy’ was the result of an endless string of things going wrong, with the prime culprit being Mother Nature.

It all started about 5 weeks ago – I had finished the bluebell pictures and had banned myself from any new shoots until I felt like I was in control of my life again, but as always something came up … and this time it was the poppies.  It was late June, and to my great disappointment I realised that the yellow rapeseed fields were gone before I had any time to make new props and be prepared. I was wallowing in self-pity, only to discover that the poppies were now suddenly in bloom too, it was almost unbearable. I was up to my neck in work, and the very idea of me doing another shoot was absolute madness, but I was feeling suffocated and desperate to not lose the chance of shooting a sunset scene in a sea of red flowers.
I tried everything I could to find a field, I even wrote an appeal for help on a community website in the hope of a tip offs from locals. Everywhere I searched the poppies had already gone, every friendly suggestion from others resulted in a dead end, I felt utterly defeated as I threw my half made flower costume was into a corner in frustration. All I wanted was a picture that made me feel free again, the last huge shoot had been so overwhelming, and I felt I was beginning to lose sight of why I started taking pictures in the first place. Photography was meant to be a beautiful thing, my therapy and release, not the pressure it had now become.

Then, just as I was close to giving up, I received a reply to my advert from a lady saying she hadn’t seen any poppy fields, but she did have an incredible patch of foxgloves growing on her land.  My heart leapt, foxgloves are such an unusual flower and far more magical than poppies! My entire focus shifted, and I started furiously emailing Elbie to arrange a time and place. Sadly, after visiting the woman’s house it turned out that I needed a bigger location, so I returned to the woods later that afternoon to try and seek out wild foxgloves instead. After hours of scratching my legs to pieces on dead branches, I stumbled on an area of bright purple-pink foxgloves shimmering in the evening sun. I was so excited, they were perfect, but I hadn’t been prepared for the fact that they grew in such spread out formations. There simply wasn’t enough impact for a picture, so instead I decided I would use the flowers to build a huge oversized floral umbrella that would echo the dome of single foxglove, and slowly a character began to form.

The following week I sat on the train home from work each evening, day dreaming of our picture, staring at the summer light as it flickered through the trees. I knew I wanted to capture the same warmth and glow for our scene, and as the good weather returned every night, for once I felt relaxed and confident it would be possible.

The weekend of the shoot arrived and Charlotte and I sat outside in the garden making the giant foxglove dress. It was nothing more than a giant dome of layered pink and purple tulle that I wanted to act like a lampshade, to create more of an effect when worn, than to be considered a serious garment. I planned to position our model in the direct path of the evening sun in the woods, so that the sheer layers would become illuminated and create a coloured haze around her.

We began by using my ancient sewing machine to gather up all the net for the skirts, it was coming together quickly and we laughed that for once we would be going to bed early. We even made the base for the foxglove umbrella in under an hour, it looked ridiculous, but was all we needed for a framework – just a big golf umbrella, some chicken wire and a few supports! 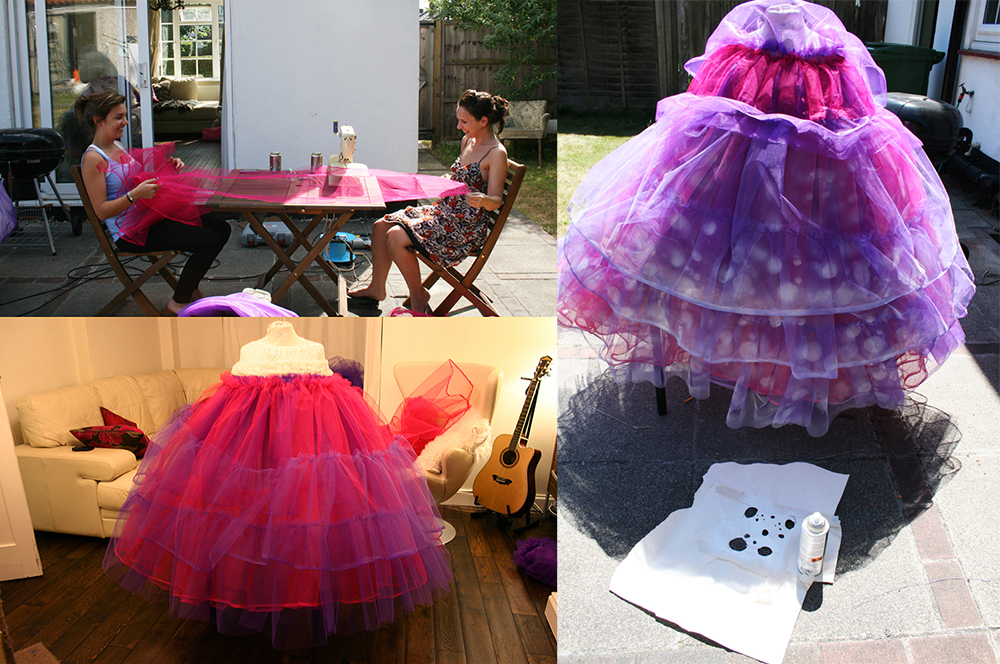 However, as always I had spoken too soon, and as the day wore on, the sewing machine began to struggle and finally broke by 2pm, leaving us facing piles of hand sewing that would last long into the night. Elbie arrived at 5pm and the costume was abandoned as we headed to the woods to scout the location for the shoot. The dress may have been a problem, but that evening the sun was everything we could have hoped for. It streamed through the tall pines as we laughed at each other struggling over the fallen trees that covered the forest floor, nothing could dampen our spirits it was all too beautiful. I found the perfect spot, took a few test shots of Charlotte in exactly the position I wanted, and then we spent the next hour collecting as many foxgloves as we could for the umbrella. 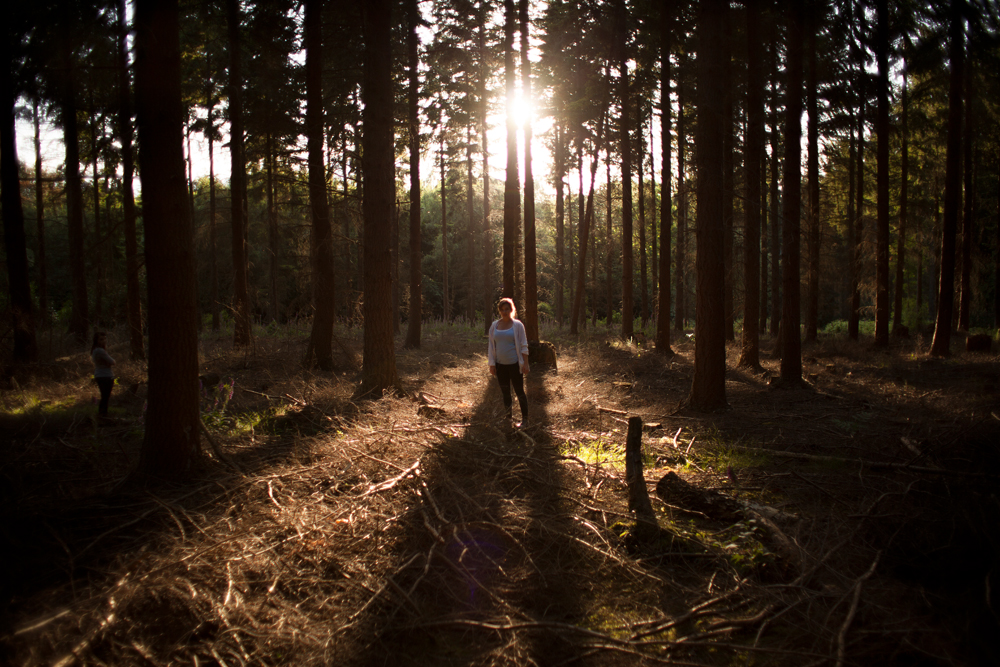 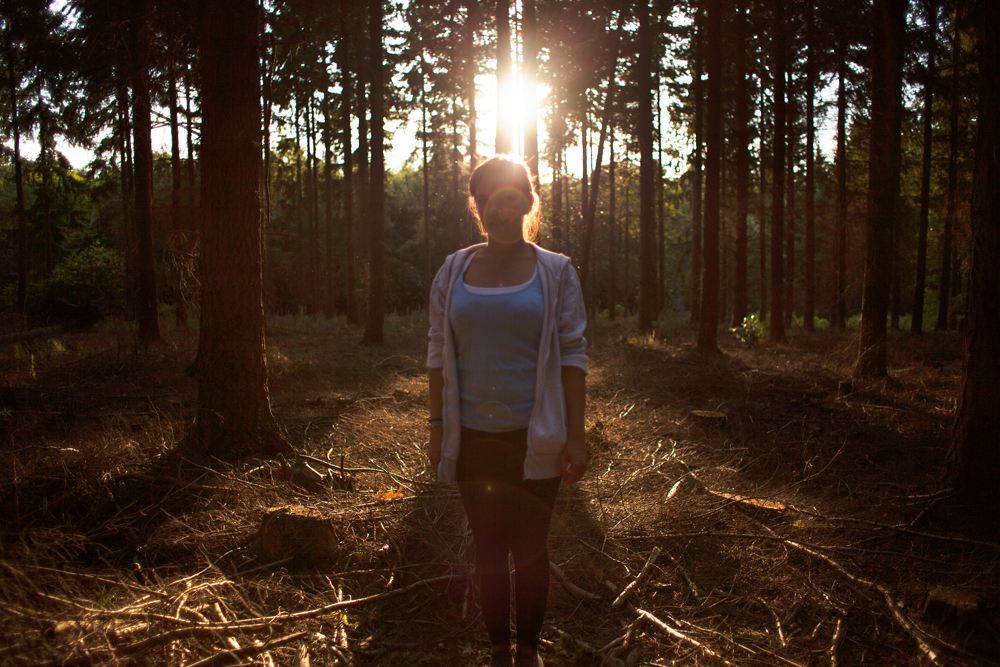 We were home by 9pm, put the flowers in buckets of water and carried on making the dress. We worked till 1am, the hand sewing took forever and I secretly worried the dress was looking a bit thrown together (which it was).

The next morning we were up early covering the umbrella with the foxgloves, being careful to wear gloves and masks as Elbie scared the life out of us googling the side effects of being poisoned. It took about 3 hours, but the one consolation was that the sun remained strong and hot, which meant it would be perfect conditions for the evenings shoot. 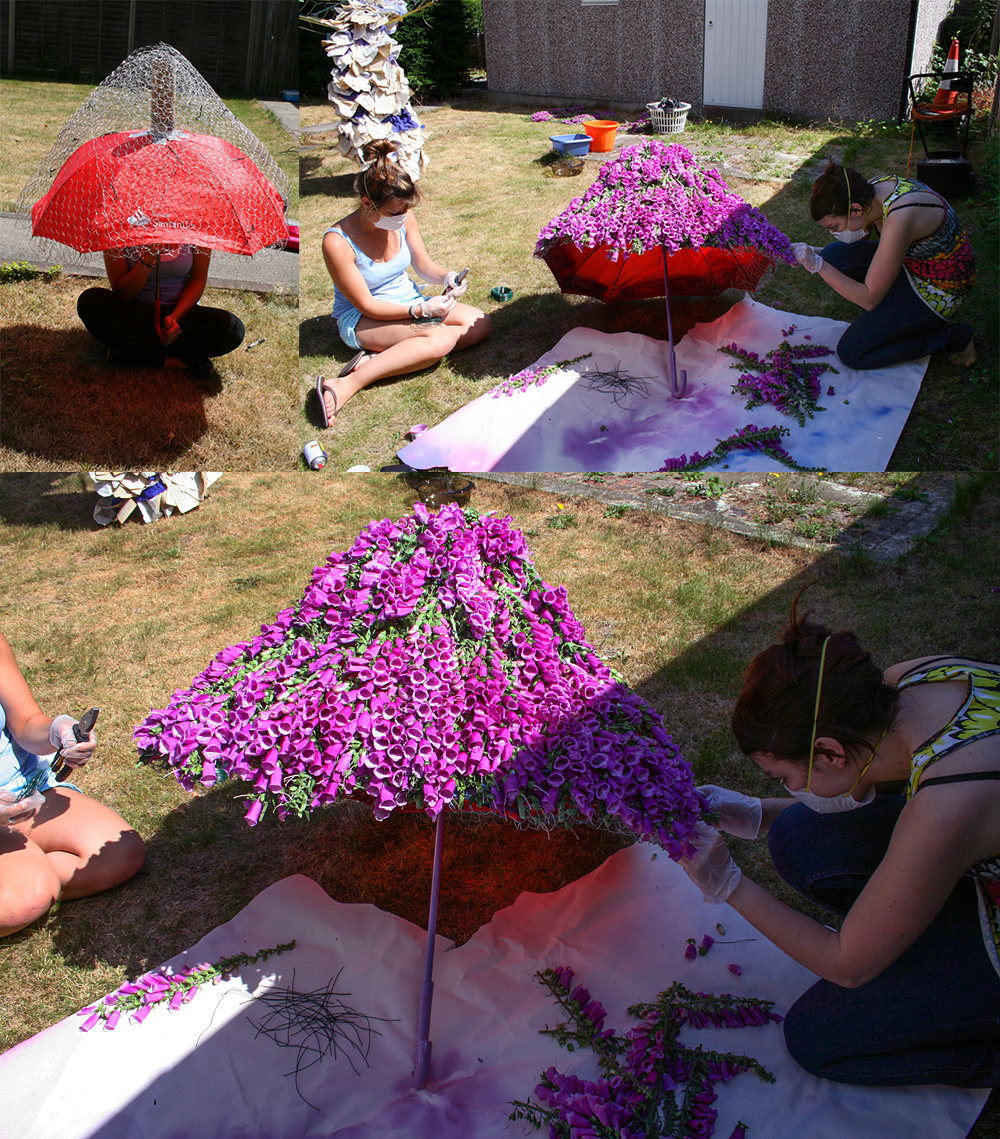 I finished the dress by spray-painting little spots all over the edges of the skirts to match the ones inside the flowers, and slowly everything came together. Helen our new model arrived and was very patient whilst Elbie and I coated her in white body paint, including her beautiful hair. I then sat and painted more foxglove spots onto her chest, whilst Elbie did the ‘real make-up’, and pretty soon we were ready to leave. As our car pulled away, I noticed the sky was beginning to cloud over, the entire concept of our shoot relied on the evening light, without it we had no picture, I bit my lip.  All we had for back up was a £15 builders spotlight from a DIY store, and a generator we had never used before. On arrival to my horror the light was completely gone, the perfect spot where I had shot Charlotte the day before, was now dull and grey ……my heart sank.

Without daring to say a word the others quietly busied themselves unpacking the kit, whilst I tried to find an alternative place to shoot.  We really were in real trouble at this point as it was heading into the evening and once the light was gone it wouldn’t be coming back. In the end I found a dense circle of trees where the light shone down in a pool from above. The surrounding undergrowth was rich and dark, and once we had stood Helen in the center, some natural magic finally began occurring around her. The costume was working well and was creating a definite glow, but it still wasn’t anything like the vision I had hoped for. Next we positioned Helen on a stool to create a floating effect and passed over the enormous foxglove umbrella. The poor girl could barely lift it, as it was so incredibly heavy. We had only met 3 hours before hand, and here she was smeared in thick white body paint, wearing a giant tutu, surrounded by mosquitos, with me desperately shouting at her to lift the umbrella like ‘its weightless’. She did so well, and I felt so bad, it was extremely difficult, and I think everyone was painfully aware just how terrible the light was. 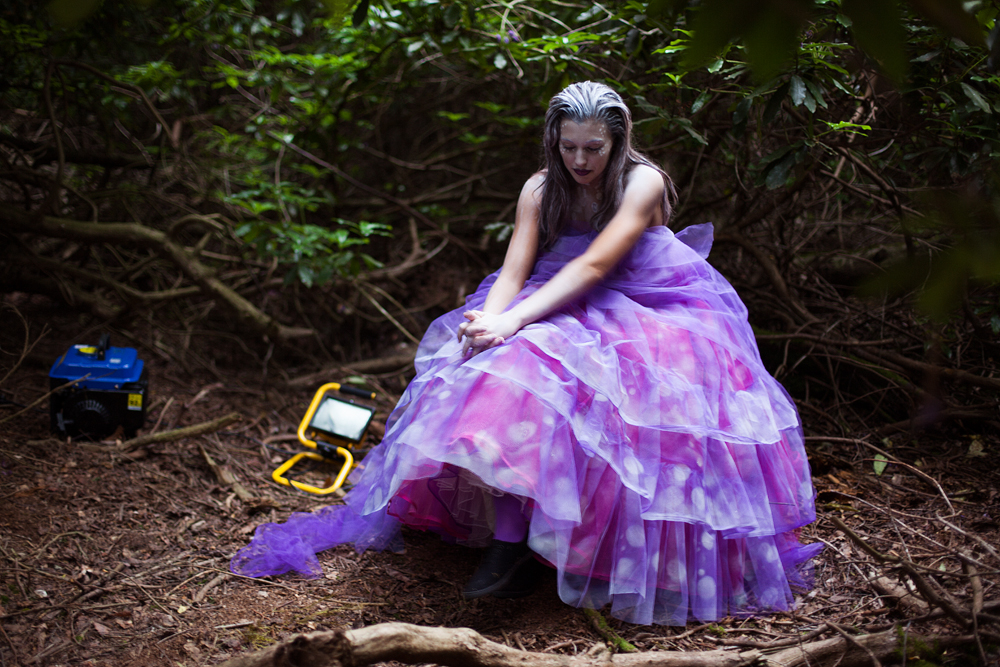 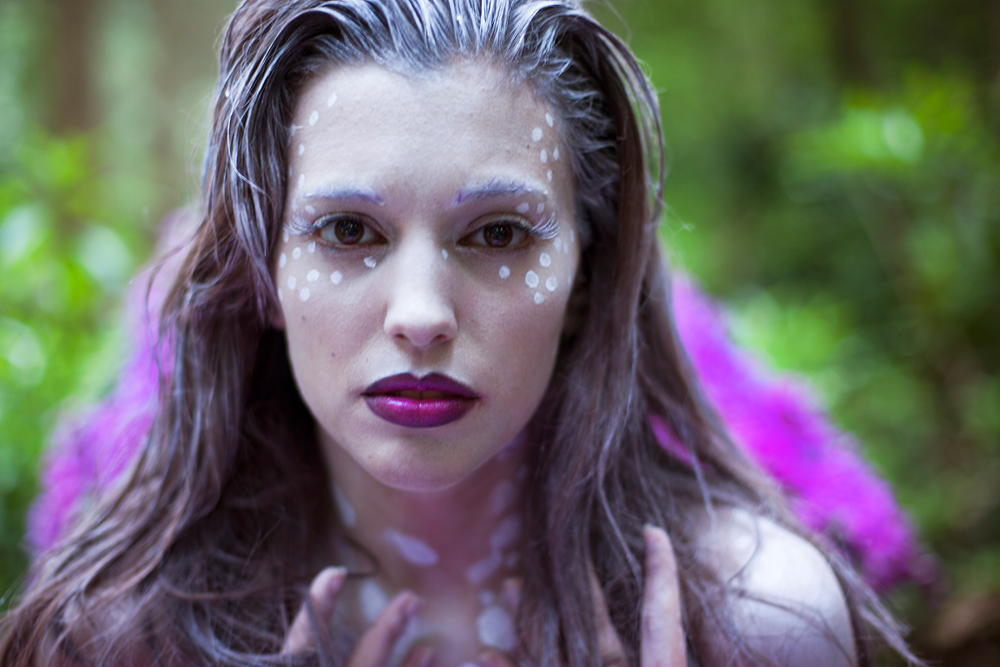 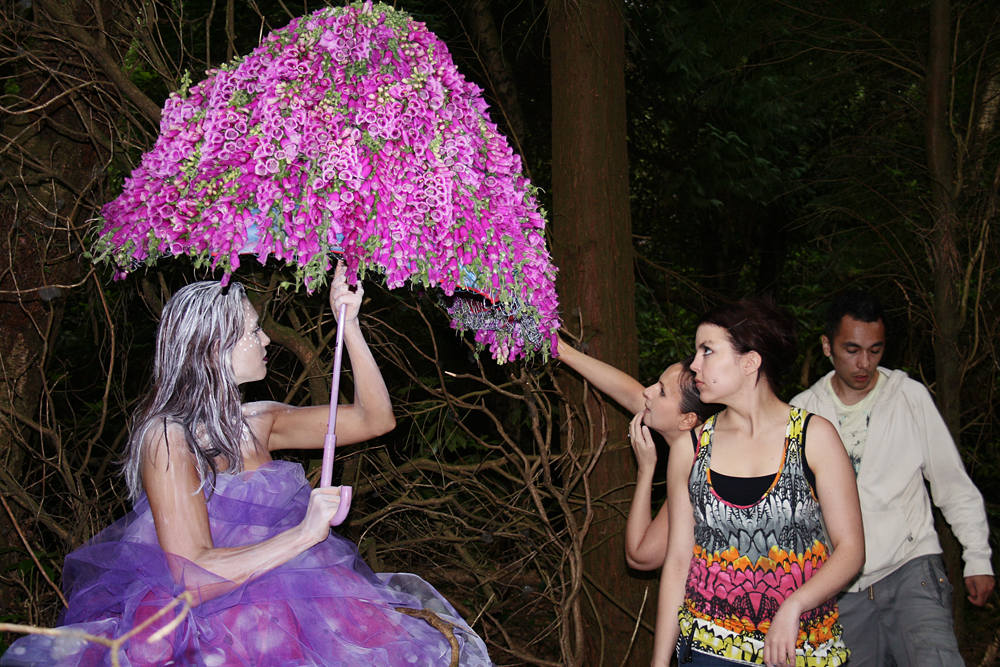 It was at that point that we had to face facts and use the emergency builders light. I have never used artificial lighting in my pictures before and I really wasn’t sure about how this was going to work. In the end Charlotte grabbed the light, and positioned it just where we had originally planned for the sun to be (coming from behind the model). In a moment of genius she crouched down, and shone it up into the umbrella through the skirts of the dress, whilst Elbie used the reflector to bounce it back on to Helen’s face, and that was it! To my amazement everything suddenly lit up like a giant lampshade! It was magical and so unexpected. The light was just enough for me to start taking pictures again, and finally, finally, I found the moment and the magic I was so desperately looking for. 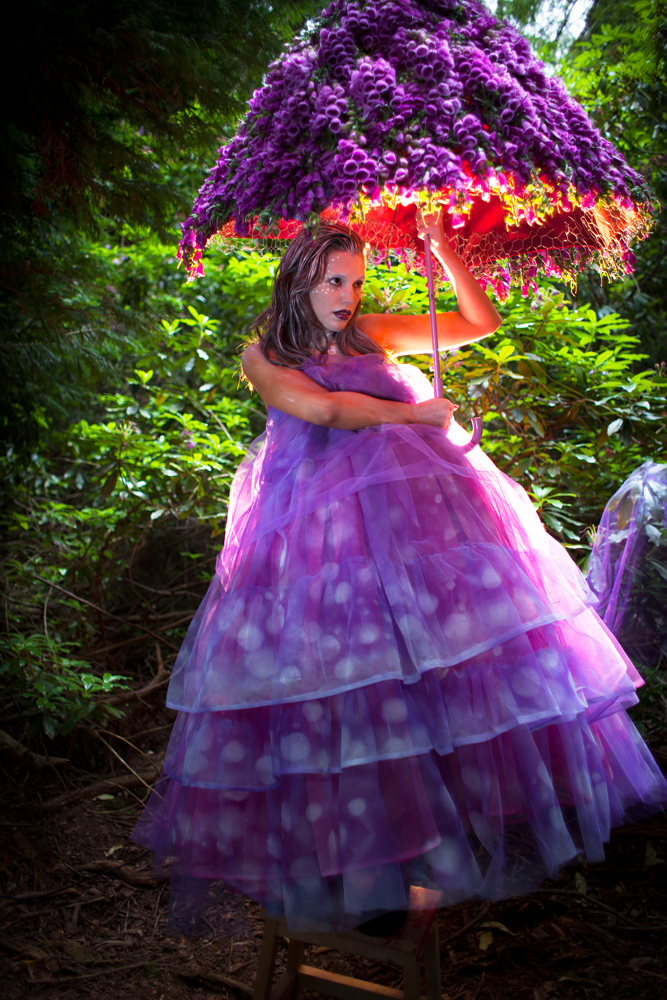 Earlier in the day Charlotte had sewn some extra lengths of the purple net to the back of the dress, and just at this point she threw them up into the bush behind Helen. On camera because of the slow exposure I was using, this resulted in strange ghostly blurred wings, it was complete luck, but became the making of the picture. To be honest I was in complete shock, minutes before everything had been descending into a dark, dull, nightmare and now I was faced with a real life levitating fairy! The relief flooded through me as I kept staring at the back of my camera transfixed by the preview. It looked like we had caught a life sized fire fly hovering through the woods, I was spellbound! We had managed the shot with minutes to go before the night finally swallowed our little set. Exhausted we packed up our kit, and returned to the cars by the lights of our phones, triumphantly shouting and groaning under the weight of carrying the generator. It was another battle one won against the English weather, I was so happy, wired and thrilled that once again, despite all odds we’d captured something wonderful.