A deeply personal journal of life behind the camera written by Kirsty.
Previous
Back to gallery
Next
25th April 2010 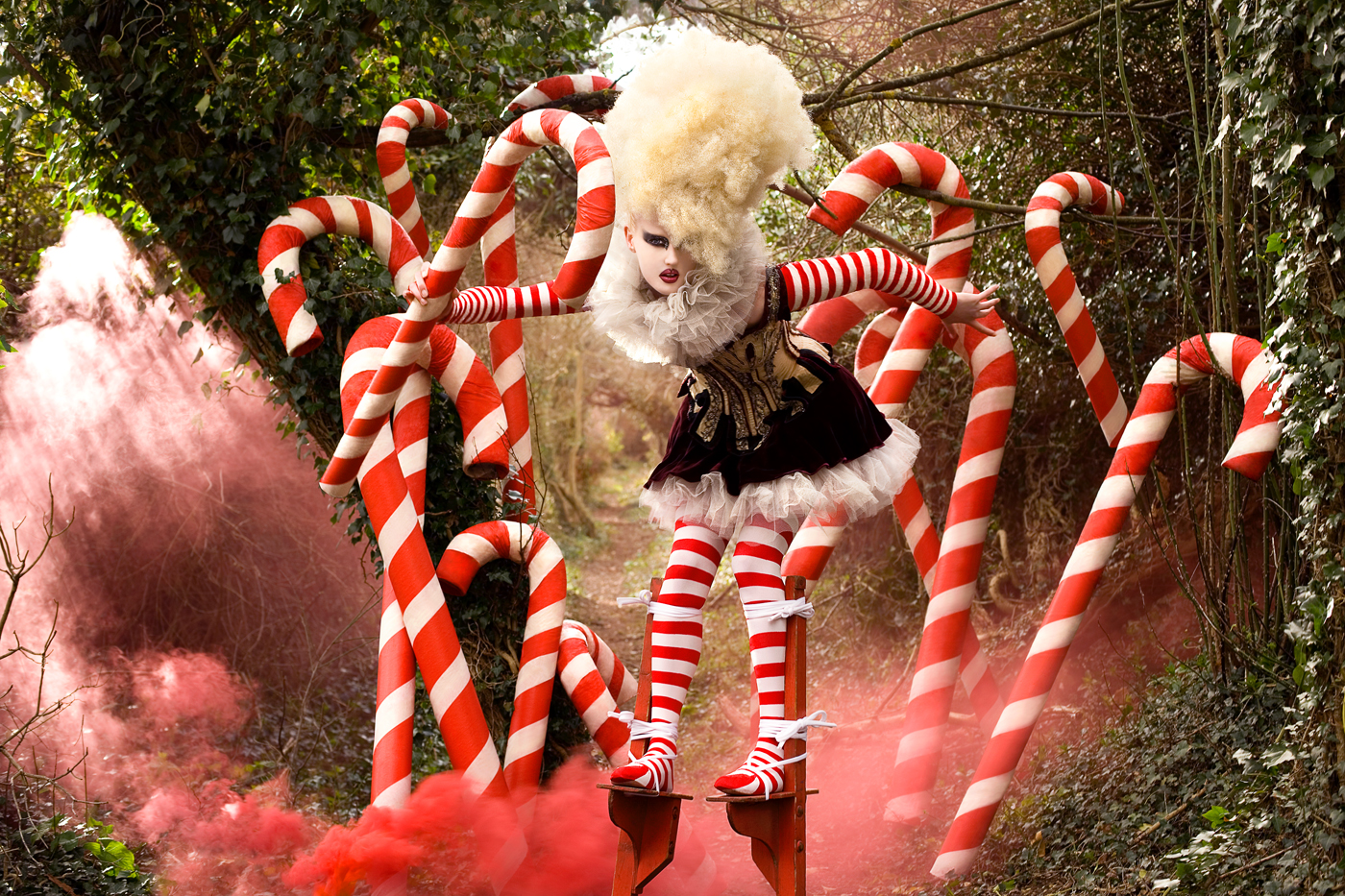 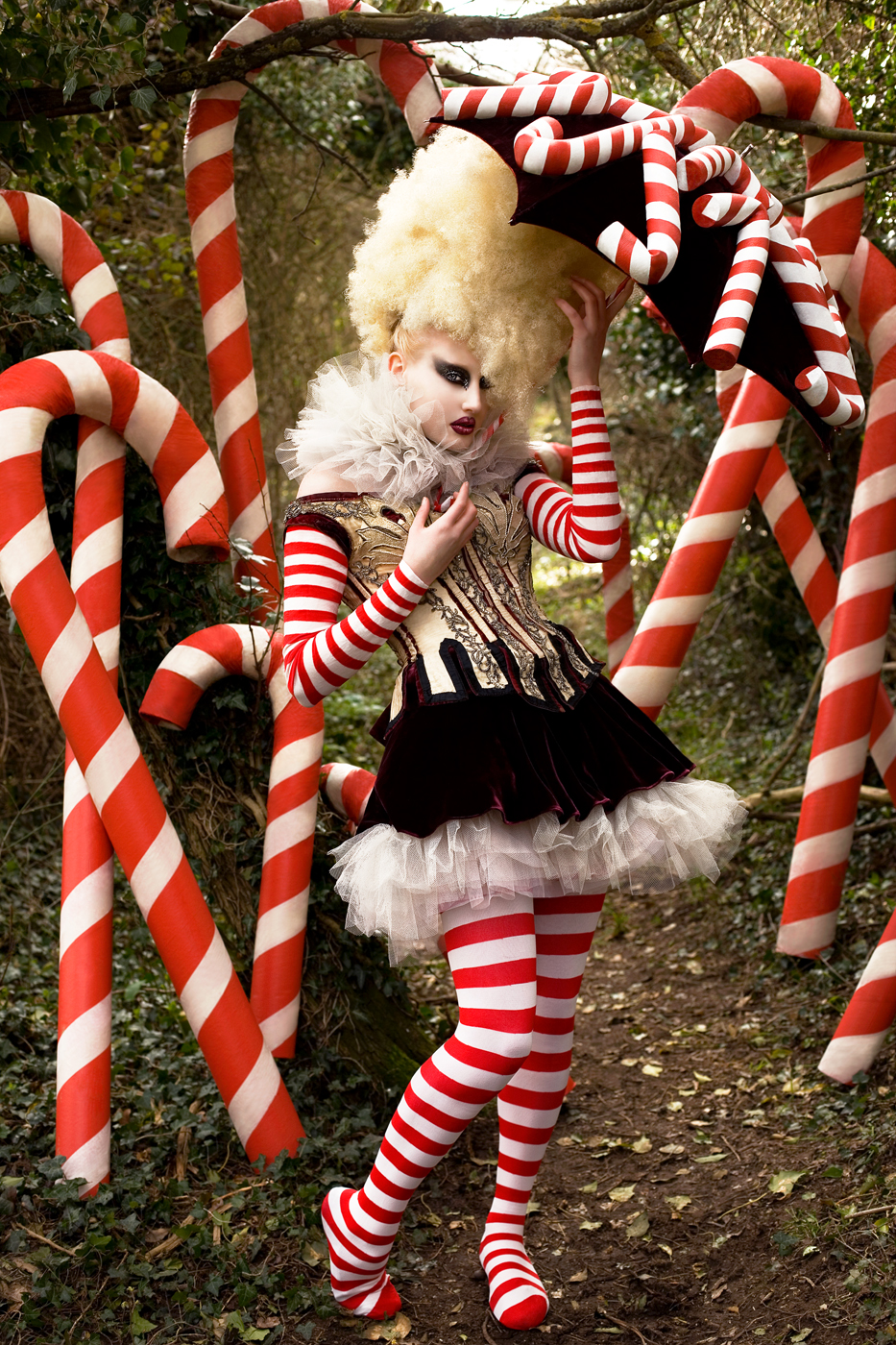 ‘The Vanity Of The Candy Cane Witch’

I really need to sit down and write this entry properly, and do it some justice, but I am so tired right now I almost don’t know where to begin. The main thing I have to say about this shoot is that it was the closest I have ever come to giving up and accepting defeat. I have never in my life worked so hard against the clock to get everything ready, and never underestimated my timing in such an epic way. I feel a little sick remembering it all, and have made a promise to myself to never go through anything like this ever again. I may sound overly dramatic, but honestly painting props in the dark at 2am the night before the shoot was something I had never imagined doing, or ever wish to repeat.

Following on from our previous scene of the Fairycake Godmother, after all the sugary sweetness, I wanted to counteract that vision with a far darker approach. A Hansel and Gretel mood, of bizarre menacing creatures that lurked in the woods began to grow, and finally I had my excuse to call upon Katie’s incredible circus skills –  something I had wanted to use ever since I first met her. 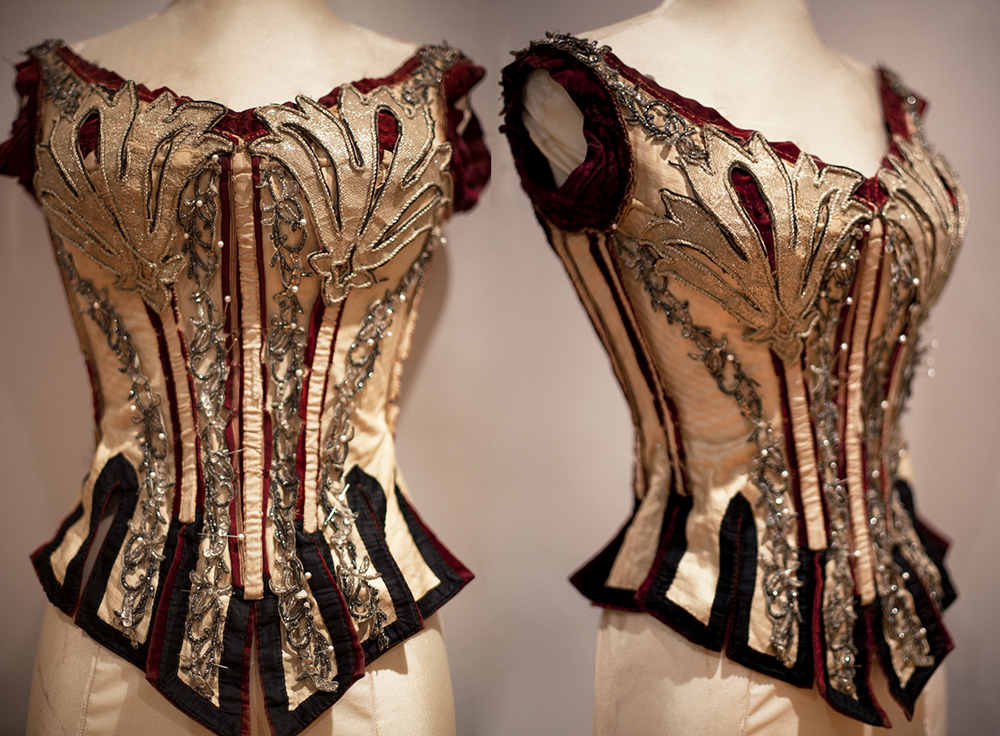 Looking back I’m not sure if it had been the triumph of our recent pictures and the sheer volume of props we had managed to create in such a short period of time, but we didn’t even begin making the giant candy canes until the day before the shoot. Over Christmas I had already made Katie’s costume, so I suppose things felt more doable and like there was less to worry about. A whole team of friends had volunteered to help that weekend, so I started the day quietly confident we would be finished by early evening and all was well. The mornings progress was good, but by lunch time to my dismay I lost 4 out of 5 people. Suddenly friends had to leave for one reason or another, and before I knew it, it was just me and Adam left staring at a huge pile of sawn up industrial card tubes. 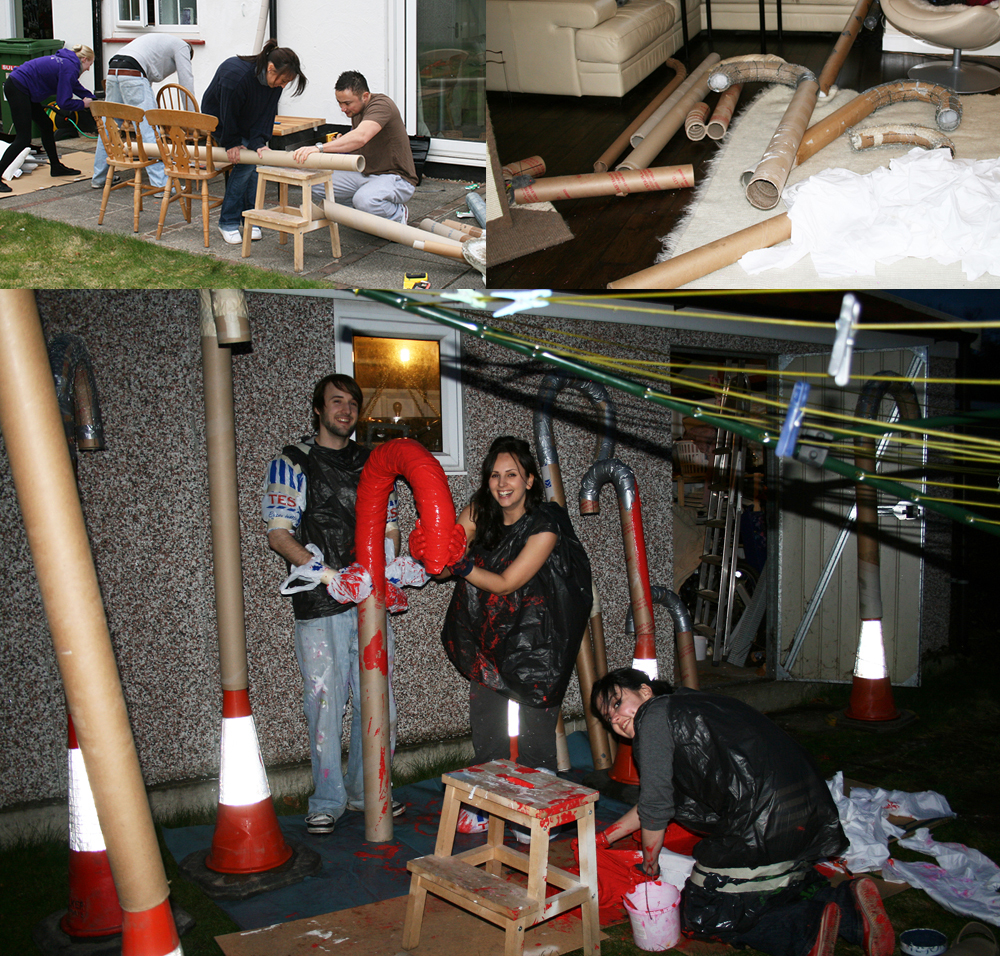 We began making frames for the curved top sections of the canes, it took a whole hour to shape just 1 tube, wrap it in chicken wire and knot it all in place with wire pins. We worked tirelessly without breaks for the rest of the day, but by 6pm we hadn’t even begun on the painting. By the evening Elbie and Katie came to help, but it was already so late and we had no choice but to carry on working outside in the dark. The only way to colour and cover the frames of the candy canes, was to soak pieces of cotton in a mixture of glue and paint, and then wrap them around their structures. This bonded everything together and smoothed the uneven texture of the chicken wire, but it was also incredibly tiring, messy and very time consuming. It had to be one of the most exhausting days we have ever had, but thankfully one of the funniest. None of us had any clothes that could withstand the unbelievable mess involved with the paint soaked wraps, so we had no choice but to fashion plastic bag costumes to work in. We attacked Adam shrieking with laughter as we sellotaped him into a bin bag dress finished off with Tesco carrier bag puff sleeves! By midnight adrenaline and a fear of failure were all we had left to run on, It was freezing cold, our only light was from a tiny bulb in the garage, and the flicker of the garden security lamp. The whole thing was a hysterical shambles, thank god we were all friends and somehow had found the good humor to carry on.  We went to bed at 2am and I knew in my heart the canes would never be dry by the morning.

Five hours later I awoke and opened the garage, of course everything was still soaking wet. I had no choice but to call everyone I could think of who would come and help. I begged them to bring hairdryers and heaters, anything that would get the props dry in time for the shoot that afternoon. After an hour the garage was turned into a sauna, 5 heaters on full blast and poor Adam armed with hairdryers, repeatedly going over every single candy cane until they were at least touch dry. We had to face facts there was no time to paint the white stripes on the canes, so I rushed to the DIY store and bought armfuls of masking tape for us to wrap the patterns instead.

An hour later the sky had clouded over and it was threatening to rain. The candy canes were now balanced on traffic cones in the garden, whilst my well meaning friends were frantically weaving around them like Maypoles, taping crooked stripes in a blind panic. I nearly cried, I was broken but had no choice but to carry on, as this was the only weekend that everyone could come together to make the picture. Giving up simply wasn’t an option.

Eventually our manic production line of glue, paint, and tape somehow began to turn a corner and by 3pm we had climbed an impossible mountain, everything was ready. It is true most of it was still slightly wet in places, but it was enough! We loaded the cars and sped off to the location. 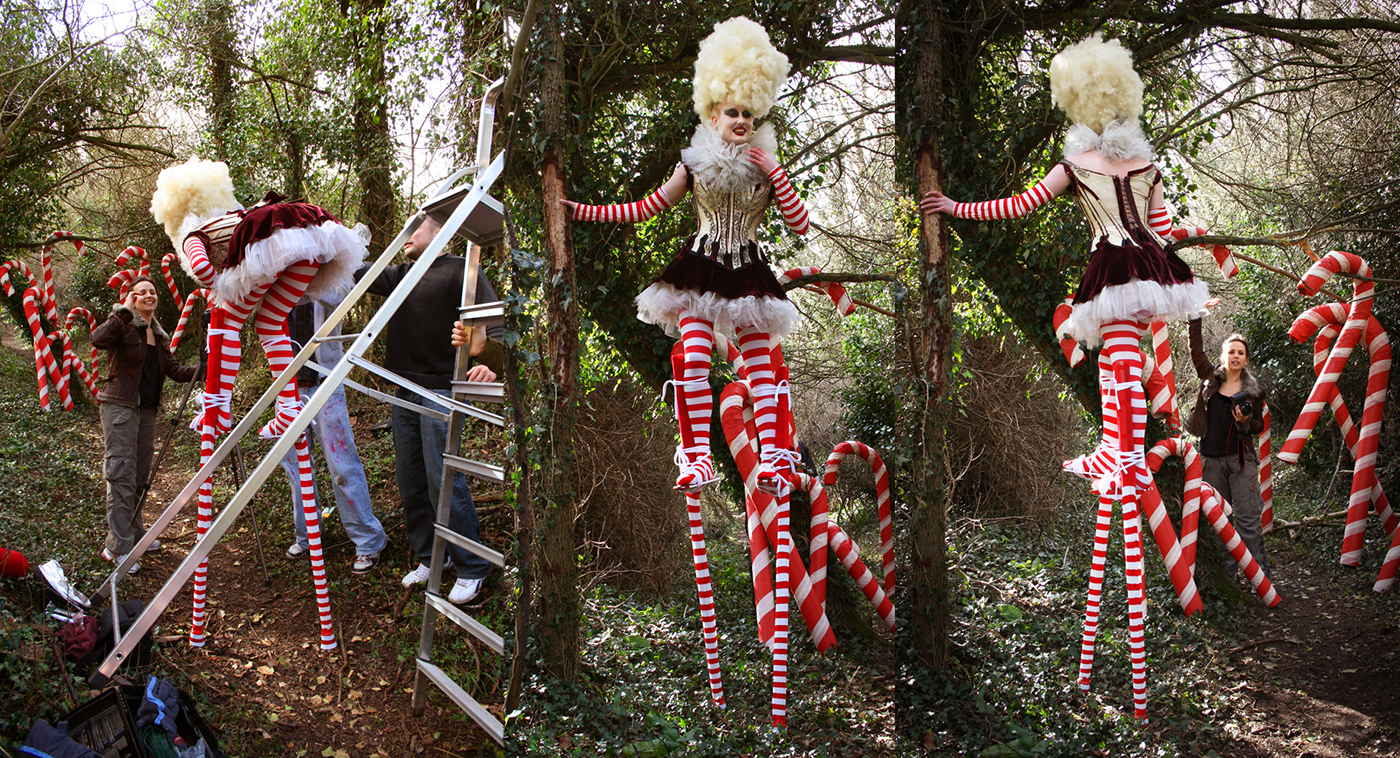 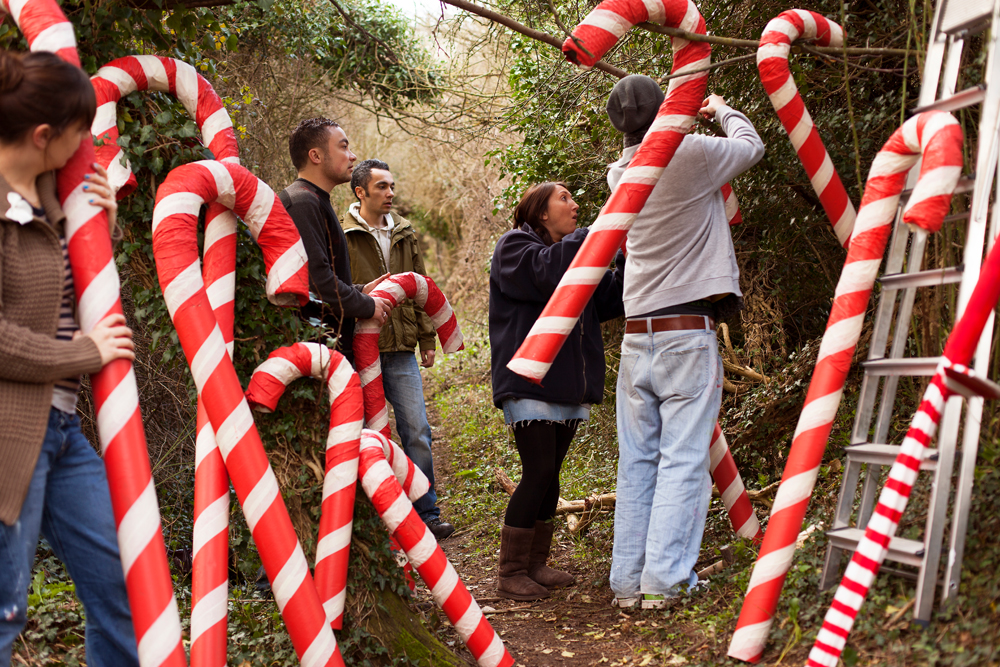 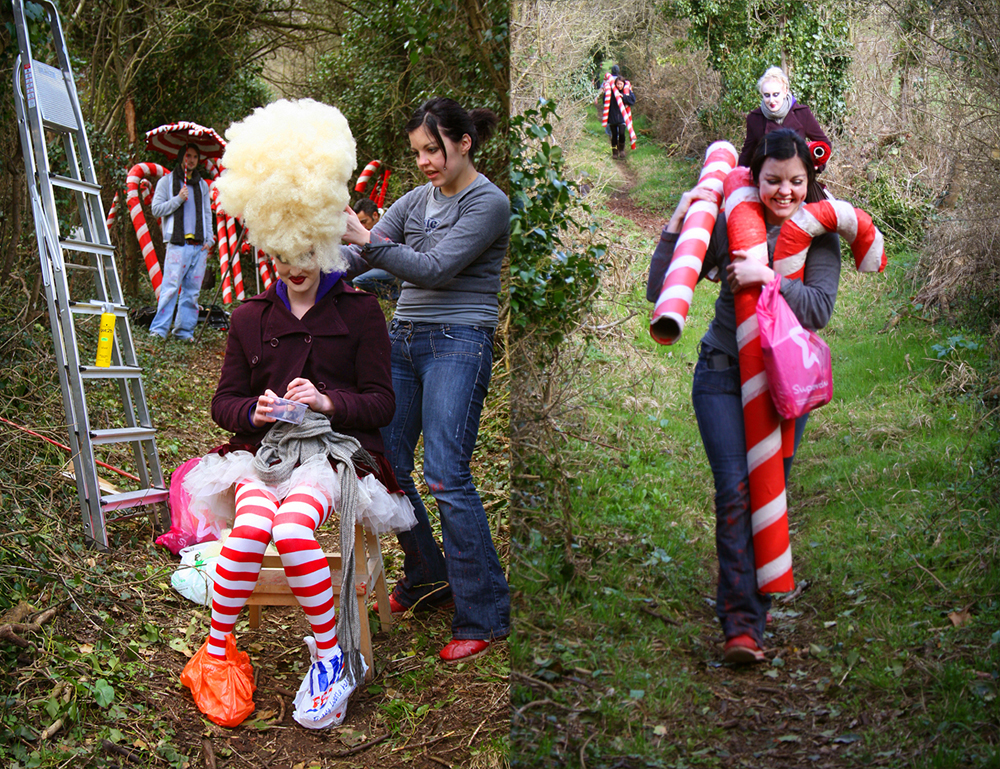 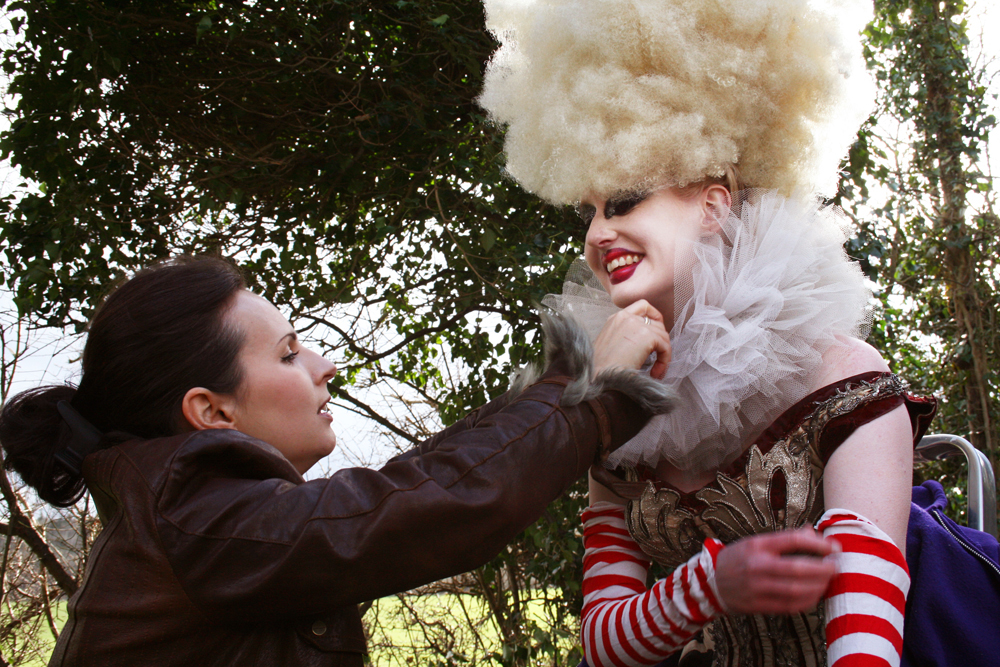 On arrival everything came together really quickly, a sudden intensity had set in and everyone fell silent working as efficiently as possible, whilst I paced up and down barking orders like a mad woman.
At long last it was all in position and everyone backed away from the set. By now it was late, really late. The afternoon light was dull and flat and I felt like I was going to pass out. I stood with my back to my friends, my hands shaking. I can’t really describe what I was going through at this point but I was embarrassed, defeated and so incredibly exhausted. I found myself begging my mum for help under my breath and praying for some light. I could feel tears prick in my eyes, I just needed to save this damn picture. Then something extraordinary happened, out of nowhere the sun broke through the gaps in the trees and flooded our little set with great shards of light. My jaw dropped as my friends let out a cheer. The smoke bombs were lit and Katie lunged into action, stomped towards the camera waving her giant candy cane, snarling and throwing her arms in the air!

It was magical, hilarious…. and utterly unbelievable. I constantly pressed the shutter, shouting encouragement at her, taking as many pictures as I possibly could until once again the light was gone, and everything returned to normal. It had been brief and crazy, like being in our own film but as I stood to one side and desperately flicked through the pictures I breathed a sigh of relief, against all odds….. god knows how……. I’d got the shot. 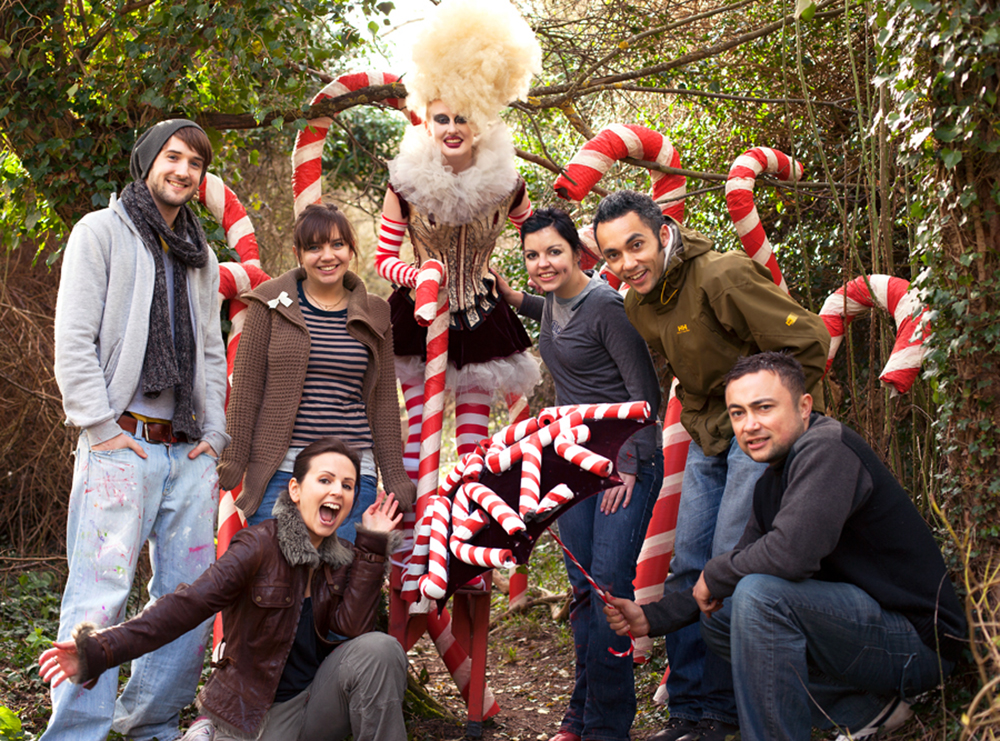 and finally me, Elbie and Katie. Me and Elbie look like absolute hell, we were so, so tired, and were wearing our worst oldest clothes…. I cringe looking at this picture, but I love it so much, because it is so precious to me. We did it … despite everything, we got the picture against all odds! 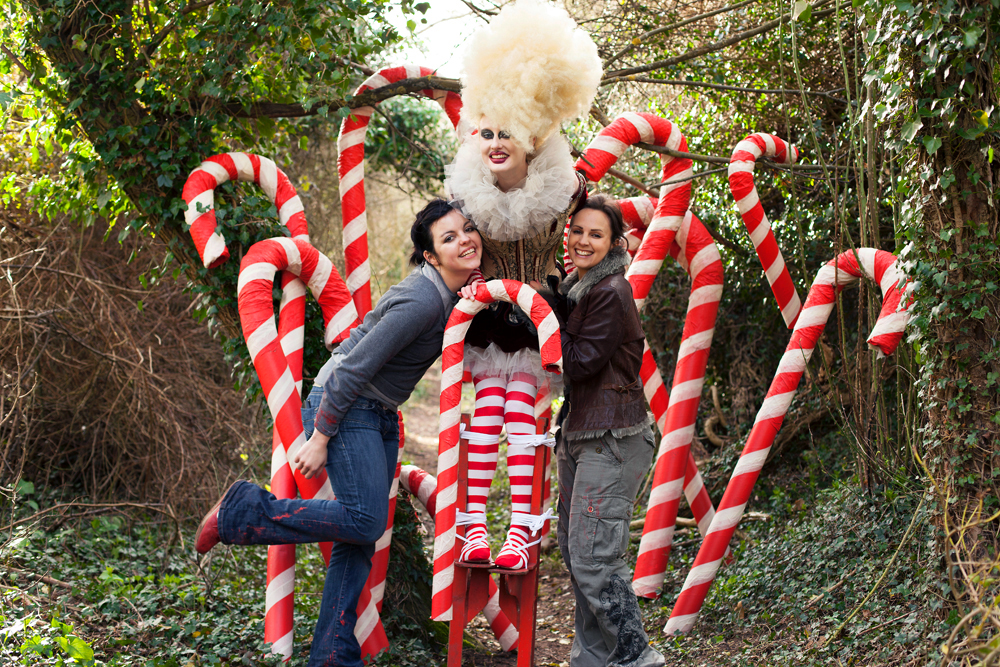