A deeply personal journal of life behind the camera written by Kirsty.
Previous
Back to gallery
Next
6th April 2010 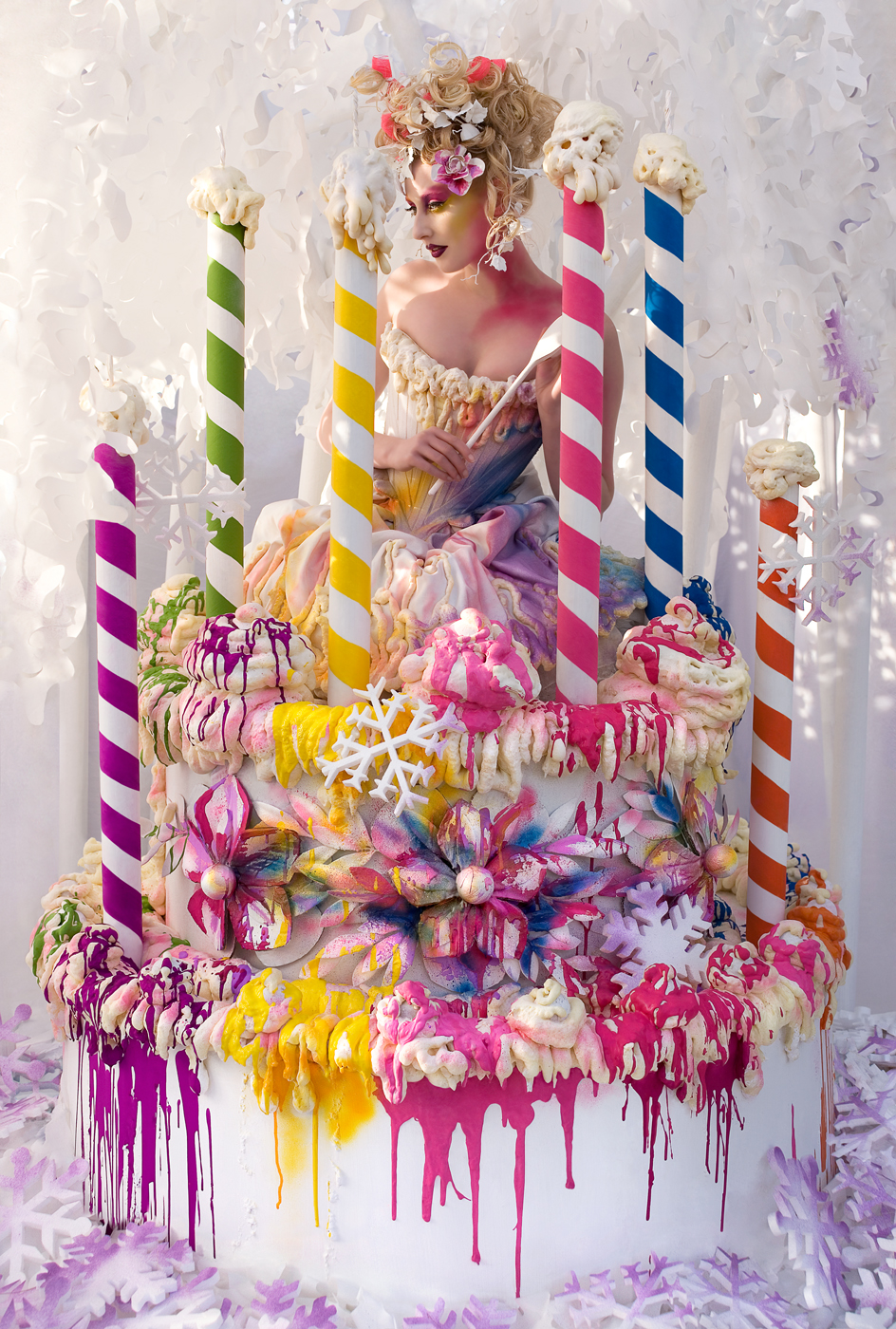 As usual there is a rather epic tale to this picture, and once again so many emotions and exhausting weekends. For anyone who is looking at this picture for the first time, they will only see the fun and colours which is wonderful and exactly how I intend first impressions to be. But for me personally this picture means so much more, it represents a lesson I learned about having patience, and being able to admit when things go wrong. Most importantly it stands for friendship, team work, and the amazing support of the people I work with.

Close up shot of the make-up

To start at the beginning, I need to go back to Christmas. If you read my diary regularly, you may remember me mentioning how in January I had shot a picture with a giant prop that took over a week to make. Well the cake in this picture was that prop, only in a far simpler form. We had created a scene with Katie standing on it in the snow but something just wasn’t right. On the day we had dragged the cake to the woods the snow had begun to melt and my entire focus had been the prop without much consideration for how things would tie together. It was a difficult morning, Katie was absolutely frozen to the core, shaking and steadily going blue, whilst I had turned up with the wrong lens, and was frantically shouting at Elbie and Matt to pull ‘more interesting’ foliage into the picture. I even found myself desperately sieving flour over branches like a mad woman to try and make the whole scene look more frosty and magical, it was a disaster.
So I sat on the pictures for weeks, avoiding my looming sense of defeat. I realized my mistake had been to make everything pure white, the cake, Katie’s hair and make-up, even the clothes. It was intended to look like a pop-up Christmas card brought to life, but instead it was flat, boring and lifeless.  The cake had survived surprisingly well, and I found myself wandering back into the garage in my dressing gown and slippers staring at it, wondering what I would do if I had the chance to shoot things all over again.  Slowly I accepted the missing element had been colour. I remembered an old packet of birthday candles I had at the back of the kitchen cupboard and dug them out. As I studied their candy coloured stripes my mind began to fizz and I knew I had to face facts, we needed to dump the old shoot and start again.

Reluctantly I sat down and wrote a long apologetic email to the team. I felt like I had wasted peoples time and especially Katie’s as she had really suffered for the pictures, but I knew if they trusted me I could make things better than before. Elbie instantly replied, saying how she hadn’t felt any magic on that shoot, and that she was happy for us to have a second attempt, and moments later the same words from Katie. I felt relieved, and so grateful for working with a team who are equally my friends as they are professionals, so it was agreed – we were back to square 1.

Building the structure for the cake during Christmas

building the cake frame in the dark!

The corset being ‘iced’

The skirt being ‘iced’

I started planning the new pictures concept, colour was the top priority and lots of it. The first shoot had been incredibly difficult because the cake was extremely heavy to move, so I decided to do something I have never done before and create our set in my back garden. I still wanted everything to be white, which was now impossible as it was April and the snow had long gone.  So instead I dreamt of children’s pop-up books and cardboard forests. I needed to make a landscape out the cheapest materials possible, as the cake had cost so much money to build and decorate. So my only option was to salvage card, as much as I could possibly find. During the week at my day job as a fashion designer, I remembered seeing piles and piles of long cardboard tubes in the garment cutting room linked to our design studio. I went to investigate and sure enough they were still there.  As you can imagine trying to explain to people how I needed their left over tubes ‘to make a cardboard forest in my back garden’ is rather embarrassing, but in the end it was all fine as most people who know me by now aren’t surprised by my behaviour anymore!
So it was agreed I could take as many as I wanted, which meant the long and slow process of bagging up my body weight in the tubes every night after work, and staggering home on the bus, train, and tube bent double –  literally carrying them tied to my back.  It took 2 entire weeks to bring enough back from London! I decided to turn my tubes into giant match-stick trees, the type children draw next to their little square houses. As the weeks passed the costume was ready, the tubes were painted, and I had booked a date for the shoot. I pulled together tear sheets for the hair and make-up and as always my ideas were getting bigger and bigger.

The pressure was definitely more than normal, as I planned on throwing paint over the model and the cake, and so everything would be ruined after we had taken the picture. I only had one chance to get this right. I knew my ‘forest’ needed to provide a solid white backdrop to the cake, and it became increasingly obvious that my stick trees would not provide the cover I needed. So I sat up one night trawling eBay for inspiration, when I suddenly thought of snow camouflage. To my sheer delight I stumbled across a type of white lightweight plastic camouflage for hunting in the snow, that was cheap and looked like children’s paper cut outs, it was perfect! I bought 5 bundles, and then found some giant polystyrene snowflakes, for added magic.  At last I had a plan, I knew this was possibly the most difficult shoot I had ever done as there was so much to make, and so I finally accepted the help of two really lovely young photographers. Charlotte and Adam who absolutely threw themselves into the work and were worth their weight in gold.

On the weekend of the shoot we started at 6am on the Saturday, and worked non-stop through to 1am. It was raining, I was terrified everything would be ruined and my house was utter chaos. There were 6 of us in total, painting, gluing, sawing, nailing everything together, even Katie the model was painting her own props! It was absolutely exhausting, I remember standing by the sink at midnight after spending over 3 hours mixing jars of candy coloured paint to throw at the cake, seriously doubting all of it. I was convinced I had pushed us all too far, but as always we just carried on until it was time to give up for the night. One of my all time favourite memories though, was when we finished the giant cake candles. It was one of those moments when everyone is slightly delirious and all sense goes out the window. It was 12.30am and we had just stuck the last paper wick in the candle heads we stood back with glazed eyes admiring what we’d made. When out of nowhere we all found ourselves instinctively swaying on the spot singing ‘happy birthday’ in a slow drawn out drone and then burst out laughing. It was definitely time for bed!

the state of my kitchen !

Making the branches for the trees

The next morning we got up early and started building the set. By 2pm everything was in position and we are almost ready to go.  I took my sprays and pots of paint and spent about 30 minutes covering the cake in pure delicious colour. It was a big responsibility, but it strangely came so naturally so quickly, it was fine and looked amazing by the time I was done.

At last I felt in control. Katie came out in her corset and dress and I spray painted her on the spot. We finally managed to squeeze her onto the set and into position, and there it was ’the magic’, the thing that had been so painfully missing from the original shoot. I stood back and tried to take in what we had created. It was weeks of work, one failed shoot, a whole lot of cardboard carrying, sawing and painting, laughs and utter exhaustion rolled into one and it was beautiful……

The forecast had been rain, and out of nowhere the sun came out and kissed our little paper trees as they fluttered in the breeze. The light fell across Katie’s face and dappled though the paper cuts, creating sparkles of light against the white sheets we had pinned to the trees. I took the pictures, wearing the oldest messiest clothes I owned. I hadn’t brushed my hair for two days, and was still wearing my paint stained slippers, but I didn’t give a damn. This was my dream, exactly how I had hoped it would be, and I was standing there in front of it. I was so, so, happy, with a wonderful gang of exhausted, excited, brilliant people who had all slaved their guts out for nothing other than this moment and it was worth every second.