A deeply personal journal of life behind the camera written by Kirsty.
Previous
Back to gallery
Next
24th January 2010 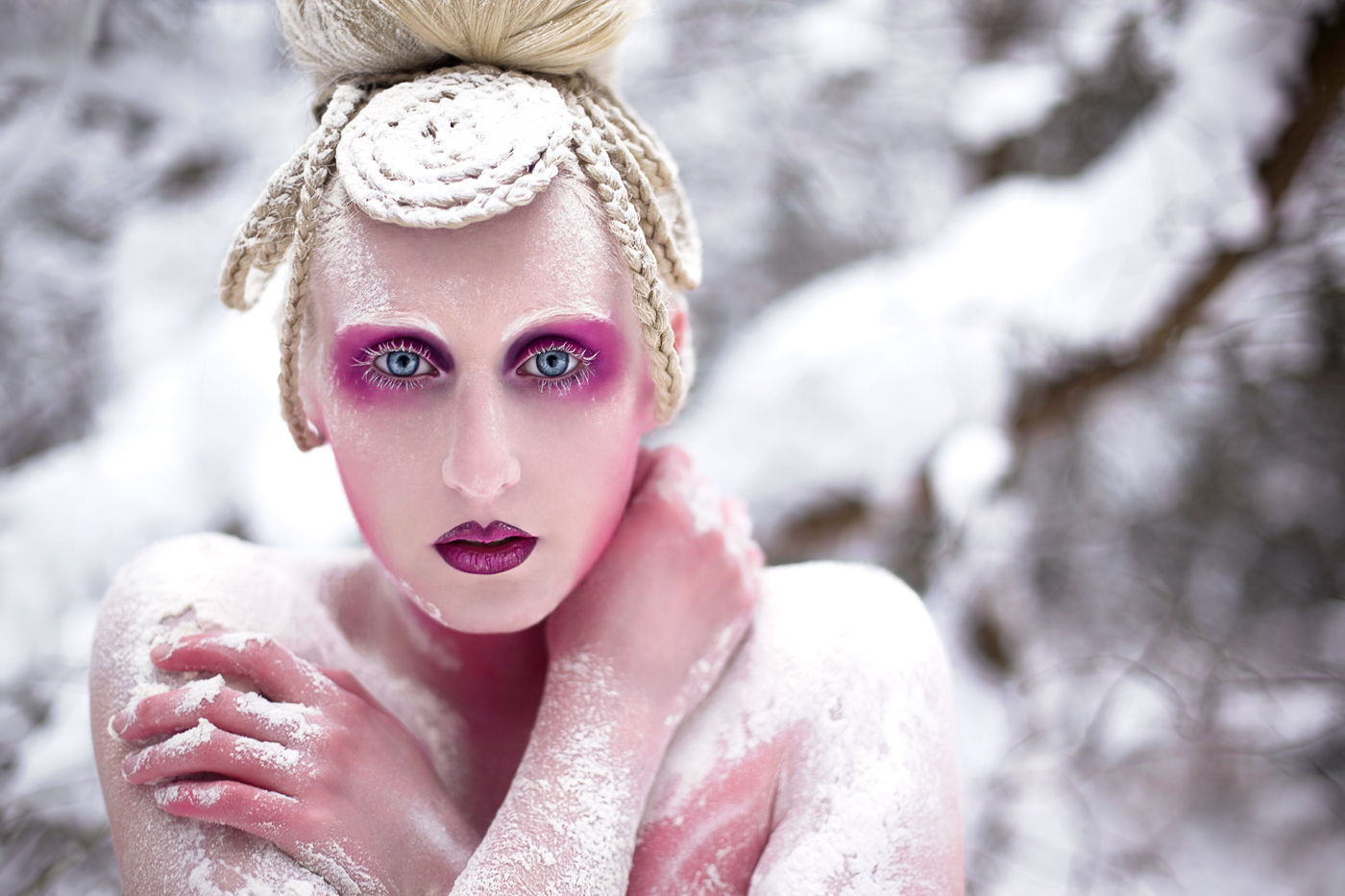 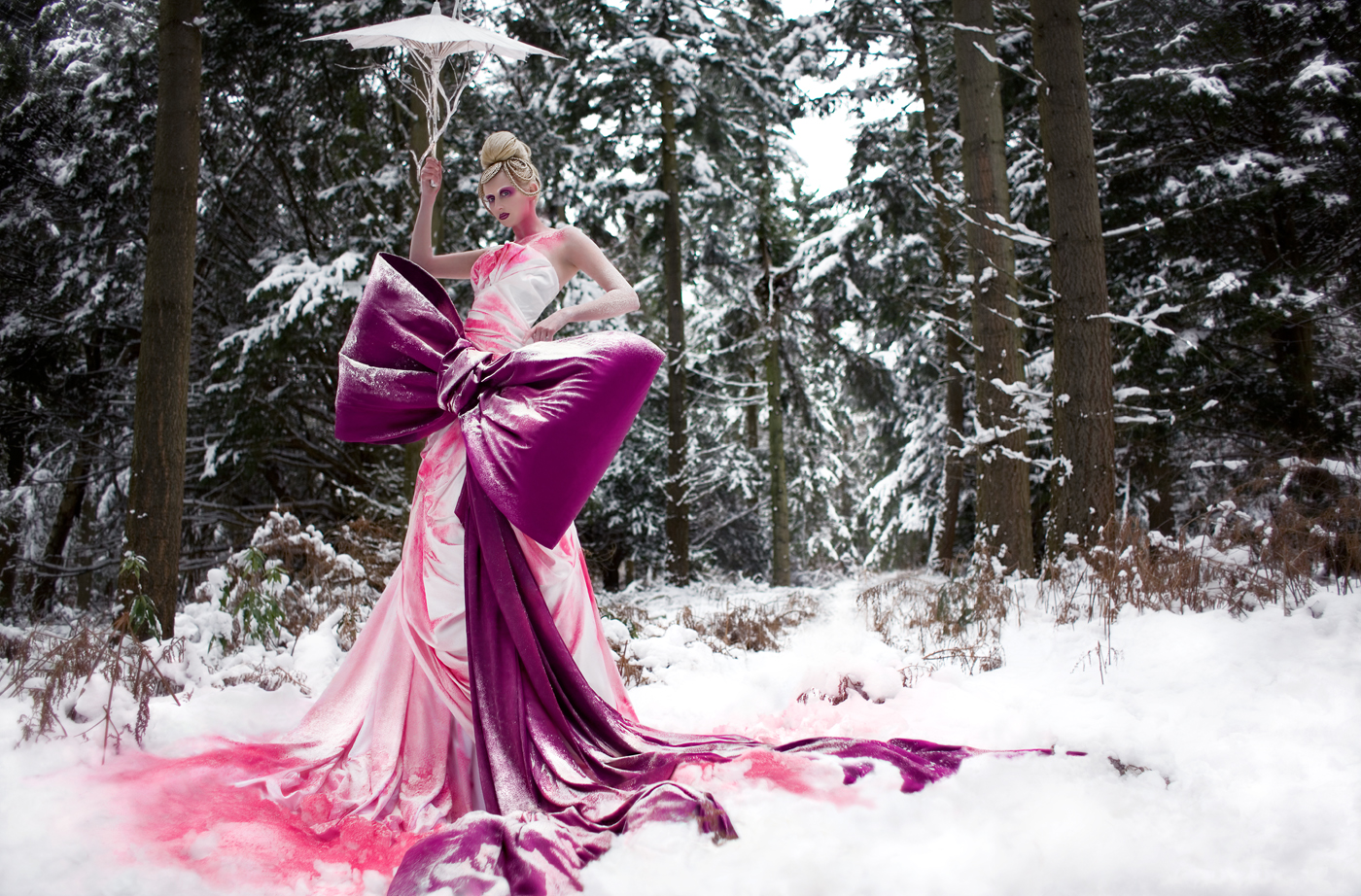 ‘The Path of Possibilities’

A lot has happened… or at least it feels like it has. Time has slipped by and sometimes I can’t quite place where it went, or how I lost the hours. Before Christmas things were bad… really bad, and now that I sit back and read the few short paragraphs I managed to write, I have cried over how utterly sad they sound. I have nothing to say about 2009, I want it buried deep and forgotten, the same as 2008. The only good things were Wonderland, and maybe a new awareness of trying harder to be thankful for each new day.

But anyway, this entry is about happier things and our next escape into Wonderland. It is late January as I write this, and we have had snow! No matter how old I get I am still insufferable whenever it occurs, and always uncontrollable until I get something special out of it. So as the first flakes began to fall, I called Elbie and Katie and we set a date to shoot. For once the snow was so heavy we actually managed 3 different scenes in one week. The first involved the biggest prop I have ever made and the second was a beautiful day spent alone with just Elbie as my model, wading through the deep drifts. The third was possibly one of the most incredible locations we have ever used, and was set in a forest so magical we couldn’t help but christen it Narnia.

Our Narnia was actually a place I had discovered in the Autumn, only now it was minus 2 degrees and knee-deep in a blanket of white. For a week Elbie and I had excitedly begged Matt to drive us there against his better judgment, constantly stuffing the car full of props, only to return home rigid with frustration after the wheels were unable to grip the icy roads.

Stuck in the house I paced for 3 days, exasperated we couldn’t reach those ancient trees. I constantly described them to Elbie on the phone and finally planned one last attempt for the following Sunday, praying we would somehow reach it before the temperature rose. In the days that followed I made an enormous 4ft fuchsia silk bow as a last minute prop, and spent the Saturday evening parading around the house wearing it over my pyjamas holding a parasol I had made of painted branches from the woods. The last thing I did before bed was sketch the hair design, research the make-up and check the weather forecast. Snow was coming, I just hoped it wouldn’t be enough to stop us.

The next day Katie and Elbie arrived, and once again the kitchen was transformed in to a bombsite of make-up, props, hair extensions and breakfast plates. Elbie followed my hair sketch as a guide and then took it much further, creating a beautiful sculpted back detail. For make-up we chose strong deep pinks and accents of white to highlight against the snow. Katie’s pale skin and blonde eyelashes pulled the whole look together perfectly; I think it was probably one of my all time favourites from the series so far.

Finally, we were ready to leave and despite recording everything for the diary this time, the one missing picture I wish I had was the state of us all in the car that morning. If I hadn’t been so worried about the time, I would have set the camera on timer to record the ridiculous comedy that unfolded in our driveway. You see we usually have a van, but on this occasion there was only one car, which meant fitting all 4 of us, a giant bow, buckets, camera equipment, a kitchen stool, rolls of fabric, and one very delicate parasol made of sharp twigs into a tiny Fiat Punto! It was ridiculous, I sat on Elbie’s lap with my face squashed against the roof, whilst Katie was crammed into the back, and Matt had to drive with the bow wrapped around his head. We eventually pulled away from the house squealing with laughter and groaning with every shake and bump of tarmac beneath us, headed to the location on our next big adventure.

To begin with the roads were surprisingly good, until we left the traffic behind, and began the steady climb up the hill towards the forest. The car fell silent as no one dared joke about our previous failed attempts. The road began to narrow, and slowly disappeared into solid sheet ice. We were the only car, I didn’t dare look at Matt, as I knew every inch of him was against driving this death trap full of illegally packed girls and props!  So I held onto the dashboard silently willing us on, as the car crawled over the ice and the strained revs of the engine rung in our ears. In the distance the silhouettes of tall trees began to appear and after what felt like an eternity, the entrance to Narnia came into sight, we had made it.

The car ground to a halt and everyone jumped out, grabbing the bags and headed deep into the trees. Our excited whoops echoed beneath canopy of the tallest pines I had ever seen, it was so incredibly beautiful I genuinely can’t put it into words. We found our spot, and immediately set to work. Due to the scale of Katie’s character, I had to physically build the dress around her, by draping and pinning fabric as she stood on a stool to exaggerate her height. I wrapped and draped meters of fabric around her tiny frame, covering her feet, the stool, and finally extended the fabric outwards to create a huge white dress. The costume was working well, but everything was taking far longer than planned. The giant bow was difficult to attach, and to my horror the light was already beginning to fade.

By this point the realization I was about to expose Katie to temperatures of minus 2, wearing nothing but a thin dress began to dawn on me. I had to speed up. I staggered through the drifts choosing the position for the shot, fumbling to change exposures with freezing fingers in an attempt to get something bright enough. Then Elbie removed the last of Katie’s warm clothes, as I frantically dusted the powdered pink paint into the creases of the dress, whilst Elbie added the same to Katie’s neck and cheeks. Finally we sieved flour to create a frost effect over her shivering body and the bow, and then we were done.

I stood back to assess our work and watched as light snow gently blew past. Katie now towered above us in the dull winter light. A living sculpture frosted with white and pink, surrounded by the most dramatic forest I had ever seen. I still don’t know how she managed it, but once we began to shoot, Katie was incredible at holding her pose as I rushed around taking as many shots as I could in the short time we had. She held still, until her body gave in and violently began to shake, her hands turning purple from the cold. Elbie ran in with a coat and scarf, whilst Matt and I ripped the fabric and giant bow from of her, worried we’d pushed her too far. None of it could ever be used again, so the costume was crumpled into bin sacks, and in the blink of an eye the entire creation was gone.
It would have been so easy to head home at that point, but I always intend to create a strong human connection with my characters, which inevitably involves following a big scene with a powerful portrait. So once more I led poor Katie through the trees into even deeper snow for her close up.  By now we had to chase pockets of light to find a bright enough setting. When ready, we removed Katie’s clothes for the second time, only this time I could see it was really too much for her. I quickly threw the last of the flour over her skin, panicking I was ruining Elbie’s careful make-up, but we had to move fast. I took some initial shots that were beautiful, but in a strange way Katie almost looked too calm. We tried different poses but nothing felt right, until asked her to stop ‘modeling’, to just let go, and show me how cold she really was. Immediately she started gasping for air, grasping her shoulders and was shaking uncontrollably. Her arms were turning red and suddenly it was that rawness of her skin against the snow, coupled with bright blue of her intense stare…that was the moment I had been looking for.
We got the shot, and In a panic Matt rushed Katie back to the car to warm up. Elbie and I packed up the kit in a daze, and trailed behind staring up at the branches half wishing we could stay. I knew I would probably never see the forest like this again, it had been complete luck we had made it that day and I was desperate to explore further and take it all in; but Katie was frozen, and we still had to reach home safely before dark.

On our return the car felt almost empty, the bow and fabrics were crushed into bags and the tree branch parasol was being smashed to pieces outside the window by Matt. We had agreed he could destroy it as payment for all the hassle it had caused, and he seemed to be enjoying every last minute as splinters flew past into the sky!

We half sledged back down the hill, the wheels skidding constantly and I realized just how dangerous this whole journey had been. It was a huge amount of effort for only two pictures, but as I watched the snow churn to black ice at the side of the road, I knew it had been worth every minute. Once again I had a head and heart full of extraordinary memories, something I always feel so emotional about at the end of these days. We had seen something wonderful, and we had all been there together in that moment. Wonderland may be from my imagination, but it is also as real as the friends we had become, and that for me, that makes every minute worth living.