A deeply personal journal of life behind the camera written by Kirsty.
Previous
Back to gallery
Next
13th December 2009

Wonderland – ‘The White Witch’, ‘In Celebration of Spring’, and ‘The Patience of Trees’ ……. 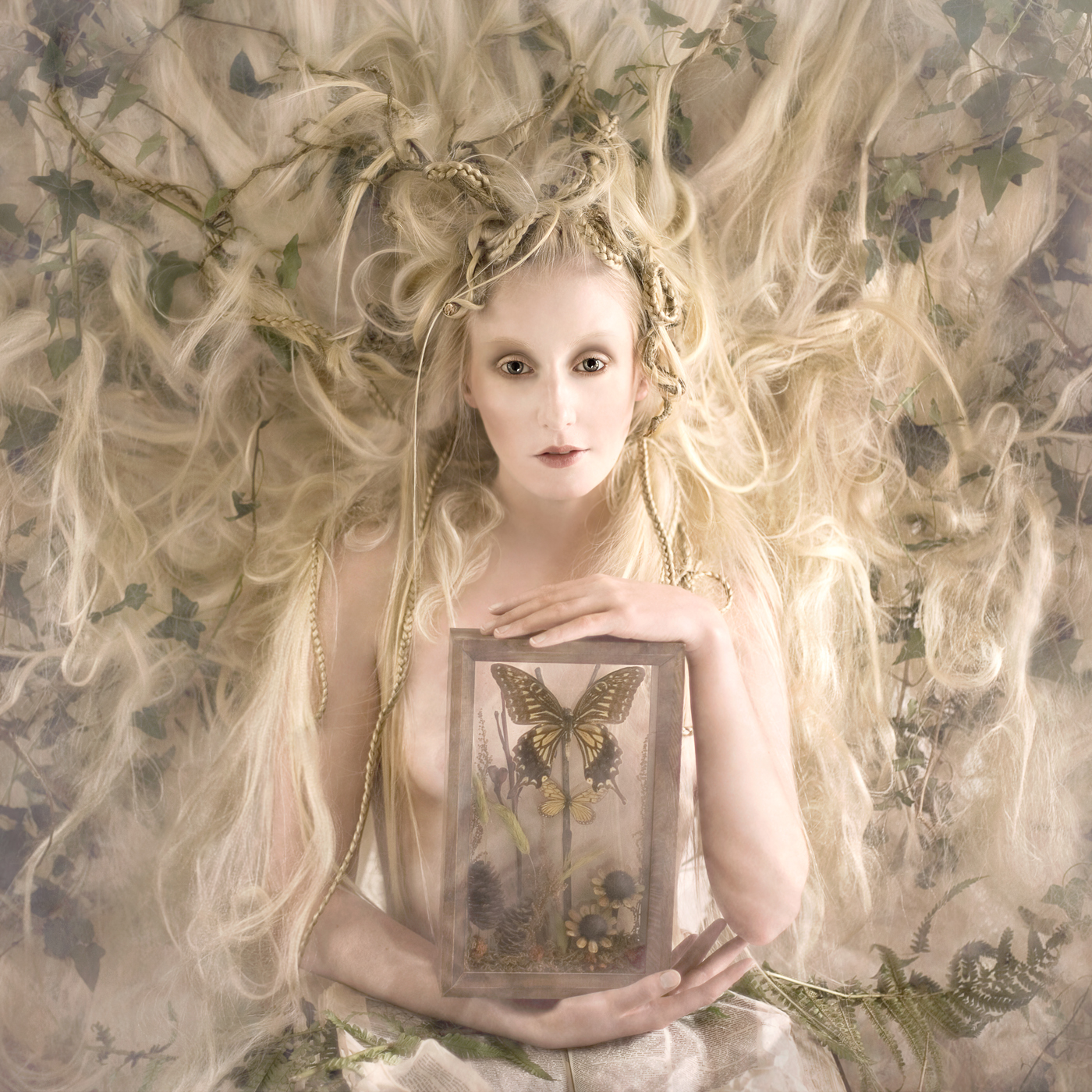 This will be a short entry, I feel drained, I miss mum so much and I’m aware I’m not really looking after myself properly right now. So this is really just to catch up on the latest 3 photos, and to show you how much work went into the ‘The White Witch’ picture….

‘The White Witch’ –
It is hard to explain, but I have long imagined a character that was inspired by the voices of the seasons in the book The Snow Queen. The tale is formed around the journey of the little girl Gerda who is guided by the whisperings of flowers, the birds and the wind, as she searches for her lost friend. I felt a need to somehow make those voices  become whole in an ethereal but very natural form, and this was the essence of how this picture came to be.
It was late October when Elbie arrived on my doorstep with her suitcase full of make-up and hair extensions. I had been out all morning collecting ferns and wild ivy from the forest to dress our set with. As always we weren’t really sure how to approach the idea, other than to work with the limited materials we had, and to try and build a set in my living room. We spent 5 hours creating the screen of hair, covering an old frame with chicken wire and weaving the extensions and ivy together through its framework. It was far more difficult than we expected and took so much longer than planned. The hair wouldn’t stick with glue, so we had to tie each section with string, elastic bands and in some places sew the different layers together. Once Katie arrived, Elbie wove extensions into her natural hair, and finally we worked for a further hour to attach Katie fully to the screen.
It was the most preparation we had ever done for any of the characters to date, It took over 7 hours and poor Katie was so patient. In the end It was quite a bizarre sight having this giant white witch sitting in my living room, but then again after a summer of this kind of madness, I suppose it felt oddly normal too. 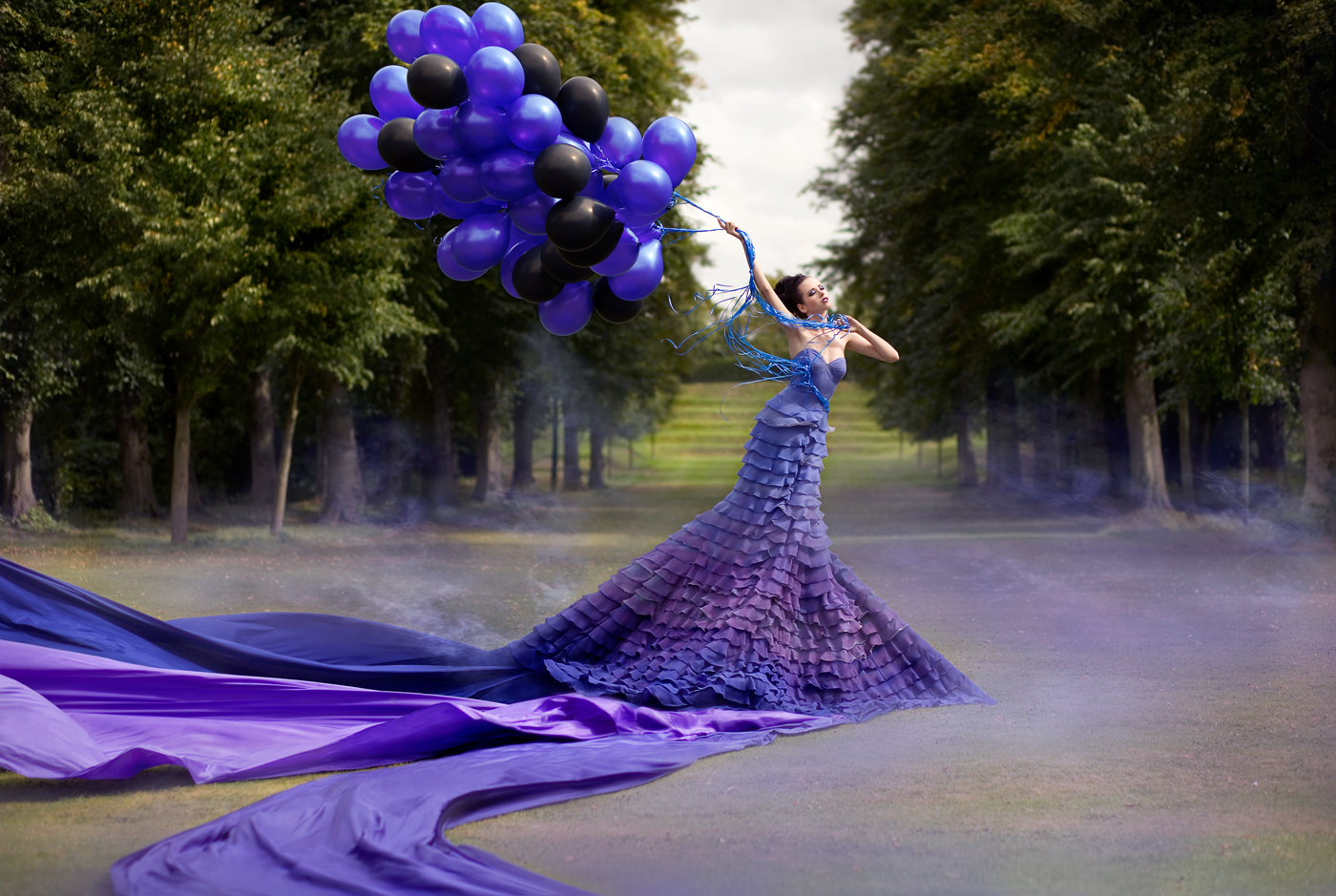 ‘In Celebration of Spring’ –
We left early in the morning for a beautiful historical house that had once been the hunting Lodge of King Henry VIII. At the time I thought this would be the last day of shooting the series, and so my heart felt light. The sun was shining as Matt drove ahead with the van, whilst Elbie and I rushed to the shops to collect our enormous order of helium filled balloons. We drove the whole way to the gardens in my tiny car packed from floor to ceiling with the balloons. Elbie had squealed with laughter whilst I struggled to see the road through the blur of black and blue rubber. How I had loved that morning, it felt so wonderful to feel some happiness again. 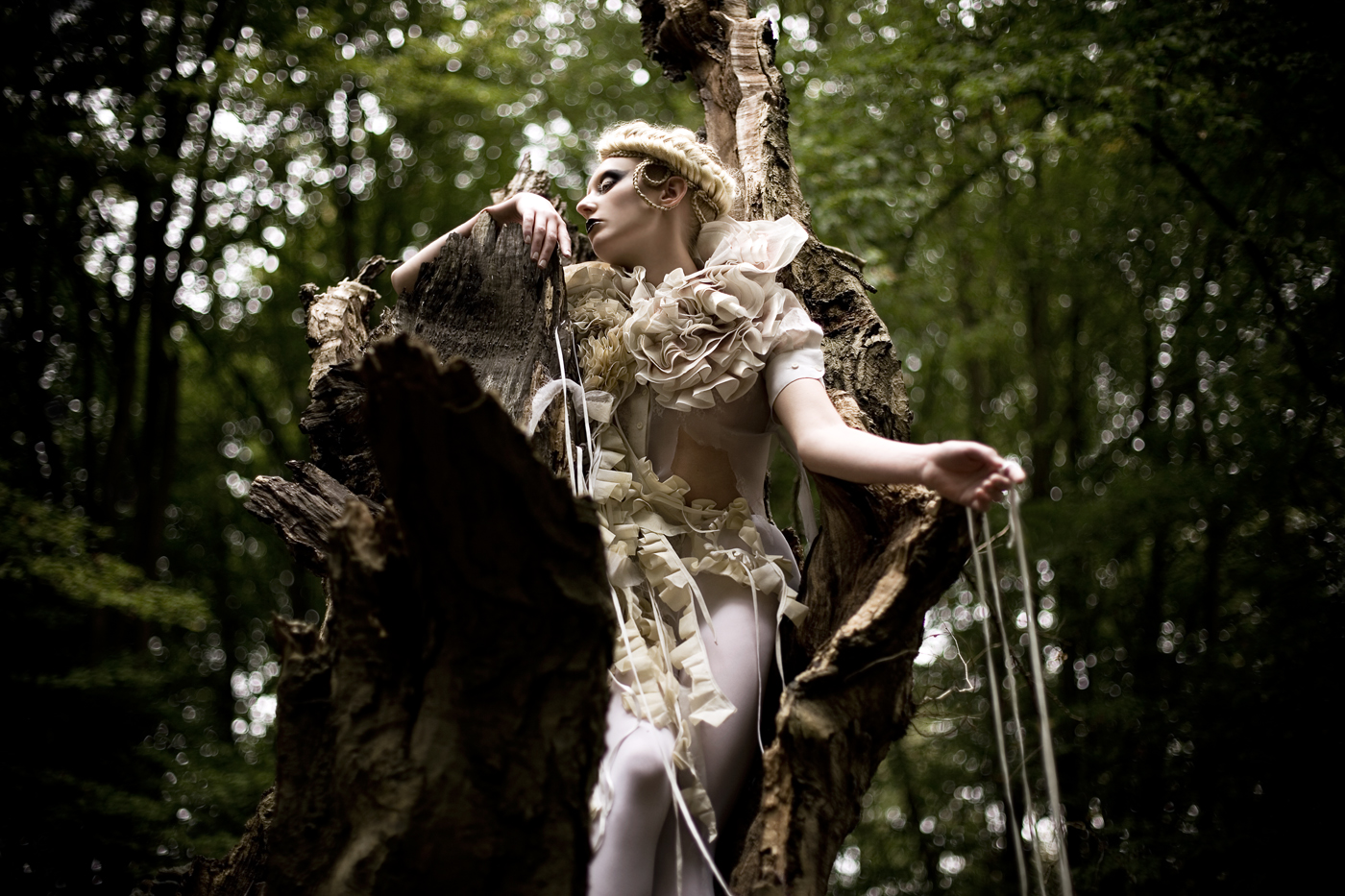 ‘The Patience of Trees’
There are moments in creating this series when the photos have become a quiet meditation for me. I may not always connect to the emotion of a picture until after I look back when I’m in need of an escape from reality. The ‘Patience of Trees’ will always be one of those scenes, remembering Katie climbing the ladder and silently lowering her tiny frame into the heart of the dead tree now resonates so deeply in me. Seeing her skin lit from overhead, against the dark decaying wood,  I guess it was a metaphor for new life growing from a broken shell. Something that I’m trying so hard to do with each day that passes without mum.