A deeply personal journal of life behind the camera written by Kirsty.
Previous
Back to gallery
Next
15th November 2009 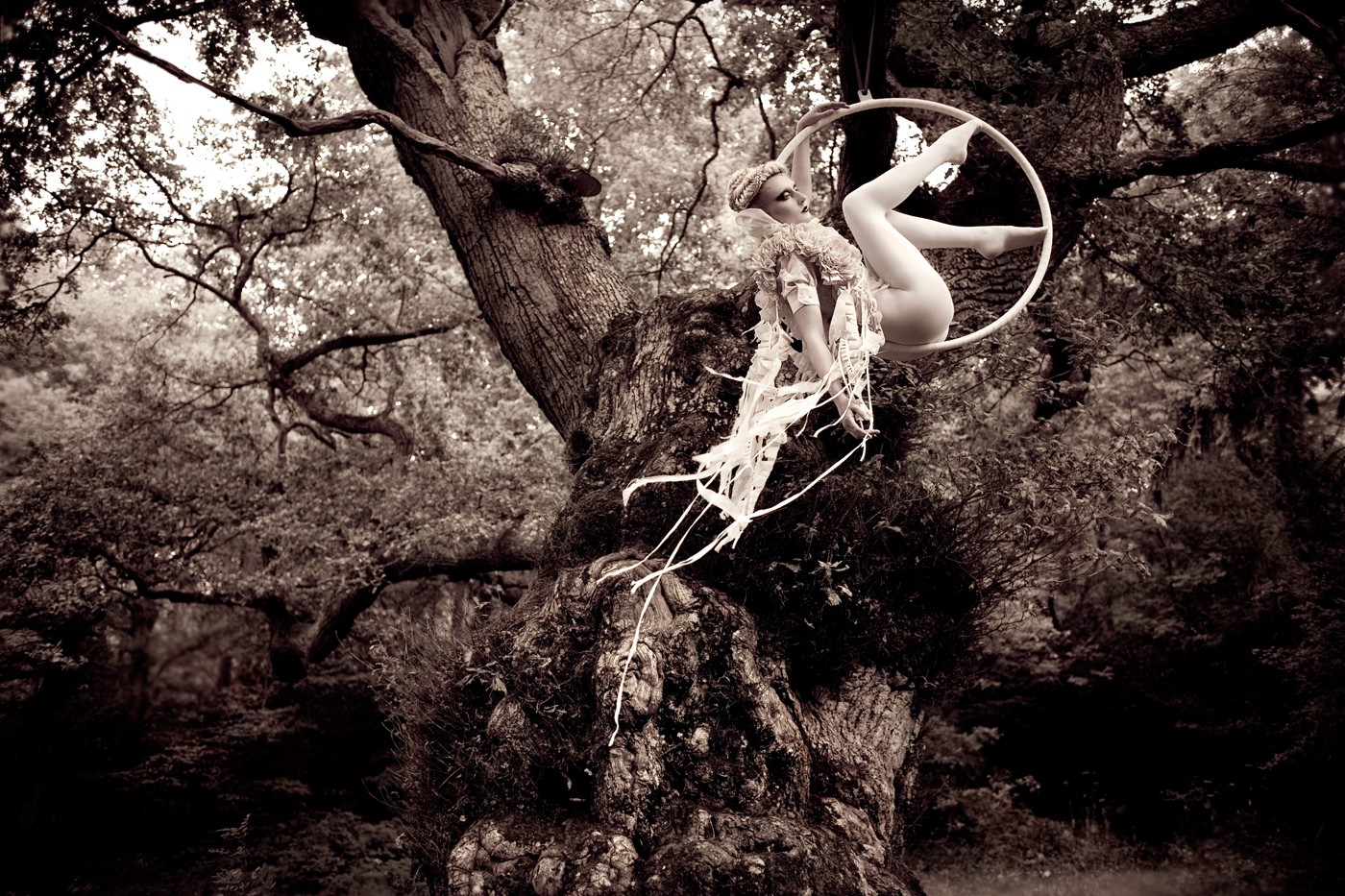 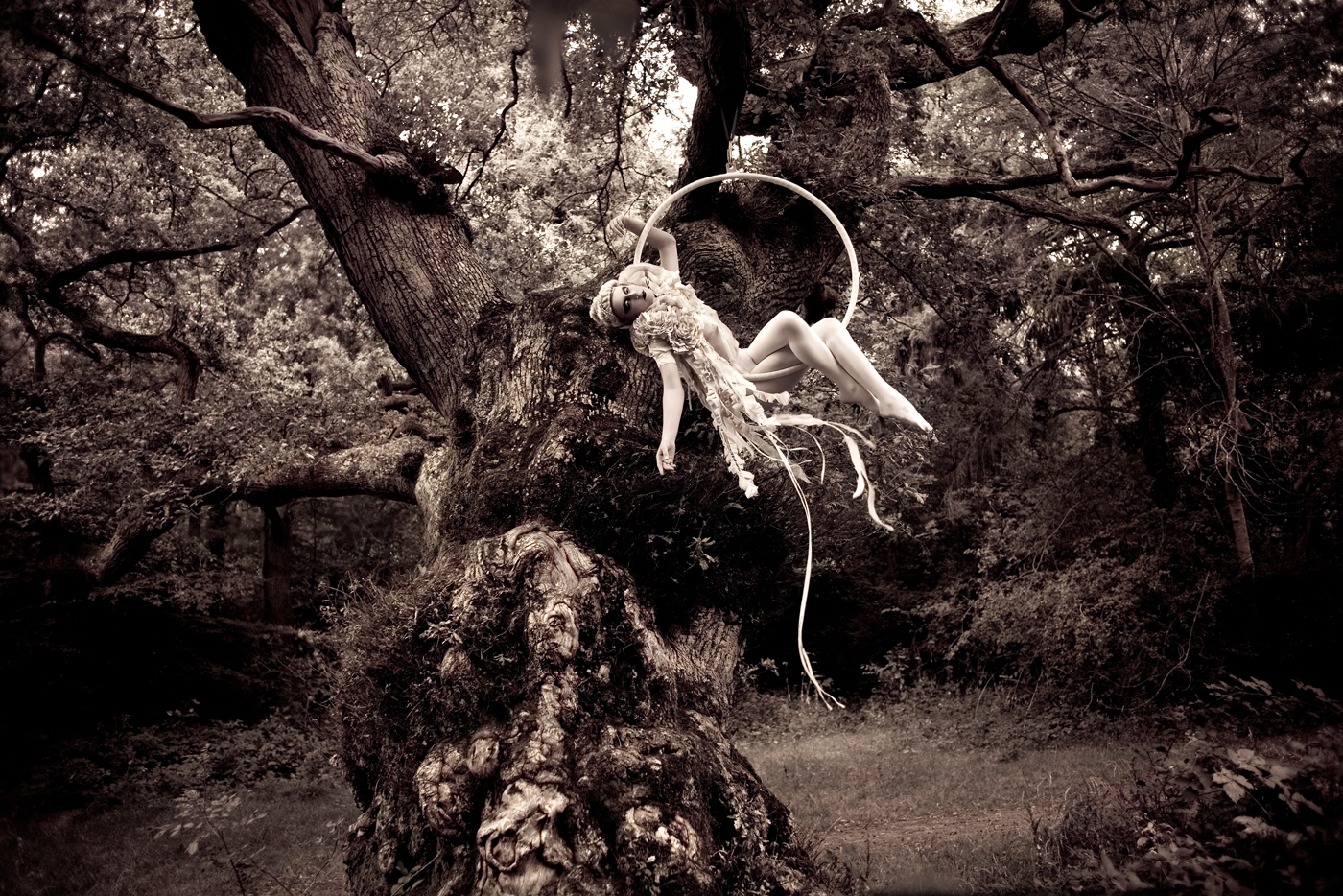 I’m afraid I fell apart……. mum died one year ago on November the 9th, and I just couldn’t keep up. I know I’m meant to be writing about the project, but I’m so behind with the words, and the pictures are taking too long to edit.  There is so much to do, and right now I’m sitting here just falling apart for the millionth time this month and I can’t pull myself together. I’m so tired, I’m sadder than I can remember, I have felt like this for so long, to the point where I feel I can’t even tell anyone anymore

Half the time I wonder why I’m bothering to write at all, but I want to try – mainly I just need to post the behind the scenes photos as they are the most important memories for me. Forgive me for this entry being so broken up, its not really what I planned, but better than nothing I suppose.

‘Far, Far Away’ –
It was a warm cloudy August day, we had started shooting at 6am with the ‘Dryad’ scene and by now I was in a daze. Our time is always so limited with all of us only being able to meet at the weekends, so we’d often shot from dawn till dusk, to get as many pictures as possible. I remember lying down in the long grass at the foot of the old oak tree where Katie’s hoop now swung in the breeze, as Matt helped her climb along its branches into position. I could almost taste the smell of the earth on my skin as I listened to the familiar rhythms of life in the trees and bushes around me. I suppose I’m  realising that in those early days, sometimes the pictures were more about my need to simply hide far away in the woods, and put some distance between myself and reality. I remember the release I felt watching Katie float and twirl in her hoop on that summer afternoon, how I wished I could be as light as her, and somehow let go of all the weight I felt in my heart. Now, months later it is that feeling which led me to the title ‘Far Far Away’ November has arrived, all I can think about is how much I wish I was still there. I know the pictures are simple, just moments really, but I love how the breeze catches the trails of the costume I had made for Katie. It takes me back to a place where I can forget things for a while and let the bad memories go, when right now all I can think about is hospitals and mum. 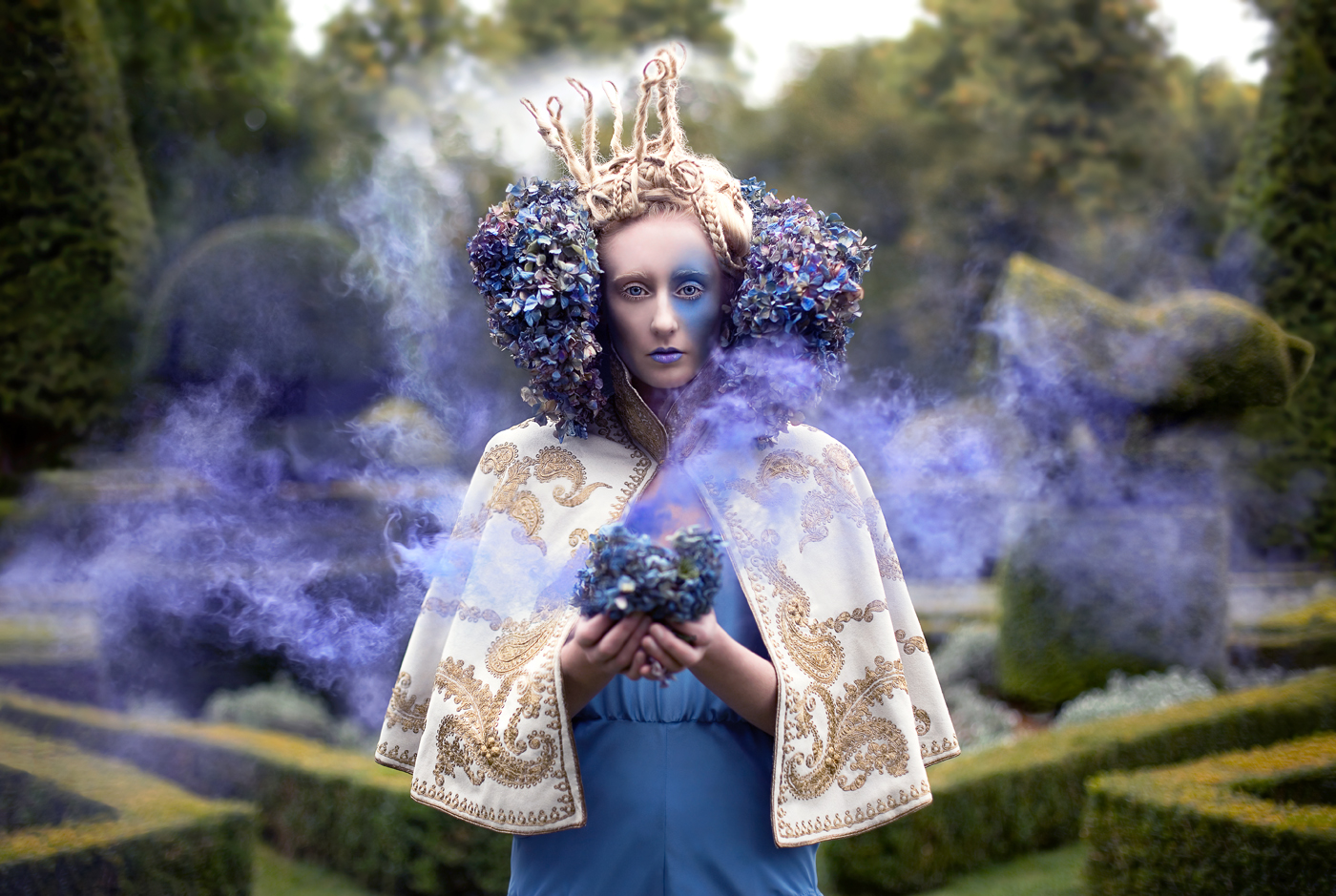 ‘The Garden of Whispered Wishes’ –

I took this picture the day I thought the series had ended. Its funny that I sit here 3 months later reading the diary entries I wrote in September explaining how Wonderland was ‘completed’. To be honest I still have no idea where its all going, I just now realise that I can’t let it go, and that I don’t want to give up the feelings I have when making the scenes. Most days the project is the only thing that offers some distraction from everything else in my head and I need it more than I ever expected. How else would I found myself in this bizarre situation, with Katie before me, her face brushed in blue and hair plaited into a crown? We were stood in the topiary gardens of King Henry VIII’s old hunting lodge, my camera focused on the icy stare of her pale blue eyes. Whilst thunder rumbled in the distance and coloured fog rose between us. Its moments like this that I was aware of the characters developing into something much more tangible. For those few brief minutes I completely believed in the fantasy we were in, and maybe this was becoming more serious than I’d ever planned. To be frank I’ve never felt like this and I’m aware its becoming an obsession to say the least. I’m just grateful the people I love are were letting me continue, giving me space and understanding my need to climb further into it all. 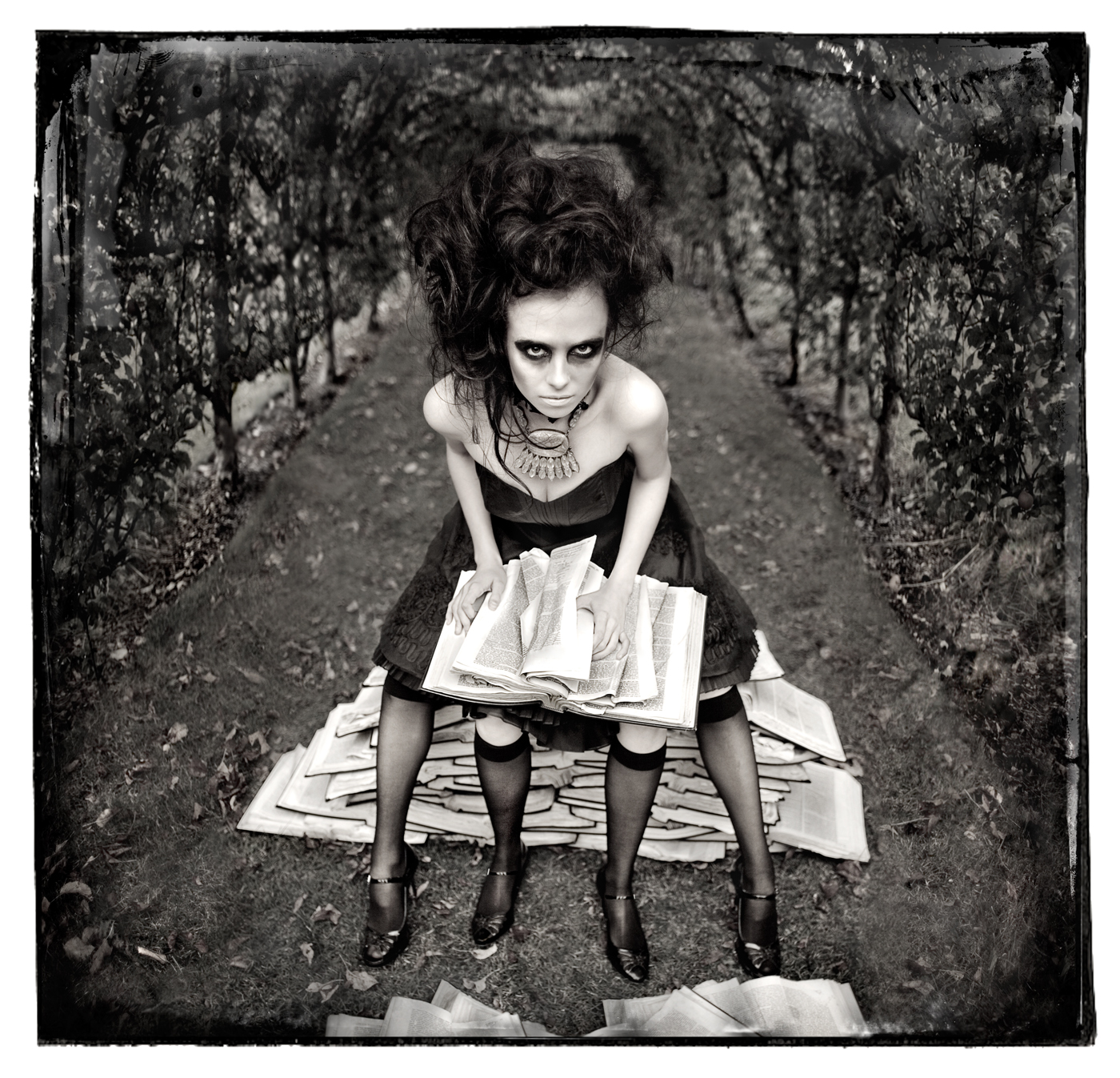 After I’d shot Katie in the maze we moved on to ‘A Twist In The Tale’. The thunder remained in the distance as rain blew in and once again the day fizzled into dull grey. As usual my plans had been based on better weather, but actually the change in mood really helped with this picture, despite the fact in the end we could barely breathe we were laughing so hard. When planning my pictures I was constantly aware of not wishing to produce a sickly sweet fairy tale, and so I was always thinking of ways to create more menacing encounters and also include real life tricks that added to their fantasy. In this case it was making four legs believable. We began by dressing Katie and Jessica in matching outfits, the book pile was built, and Elbie backcombed and teased the Jess’s hair into a knotted heap. Katie patiently practiced her stretches whilst I set up the camera under the arbor of the orchard. I had no idea if this simple concept would work, but as soon as Katie bent backwards over the books and Jess carefully sat across her hips everyone collapsed in hysterics. There was no doubt that Jess was a real live creature and owner of 4 perfectly natural legs. It was so funny Elbie and Matt momentarily had to leave the set because their laughter was so uncontrollable whilst I desperately tried to get the shot. Finally composed and after several attempts to pull ourselves together, on my command Jess began ripping pages out of the books and rolling her eyes in the back of her head, it was truly like standing in front of a monster! Until once again we all fell apart laughing, and I was forced to call it a day ! 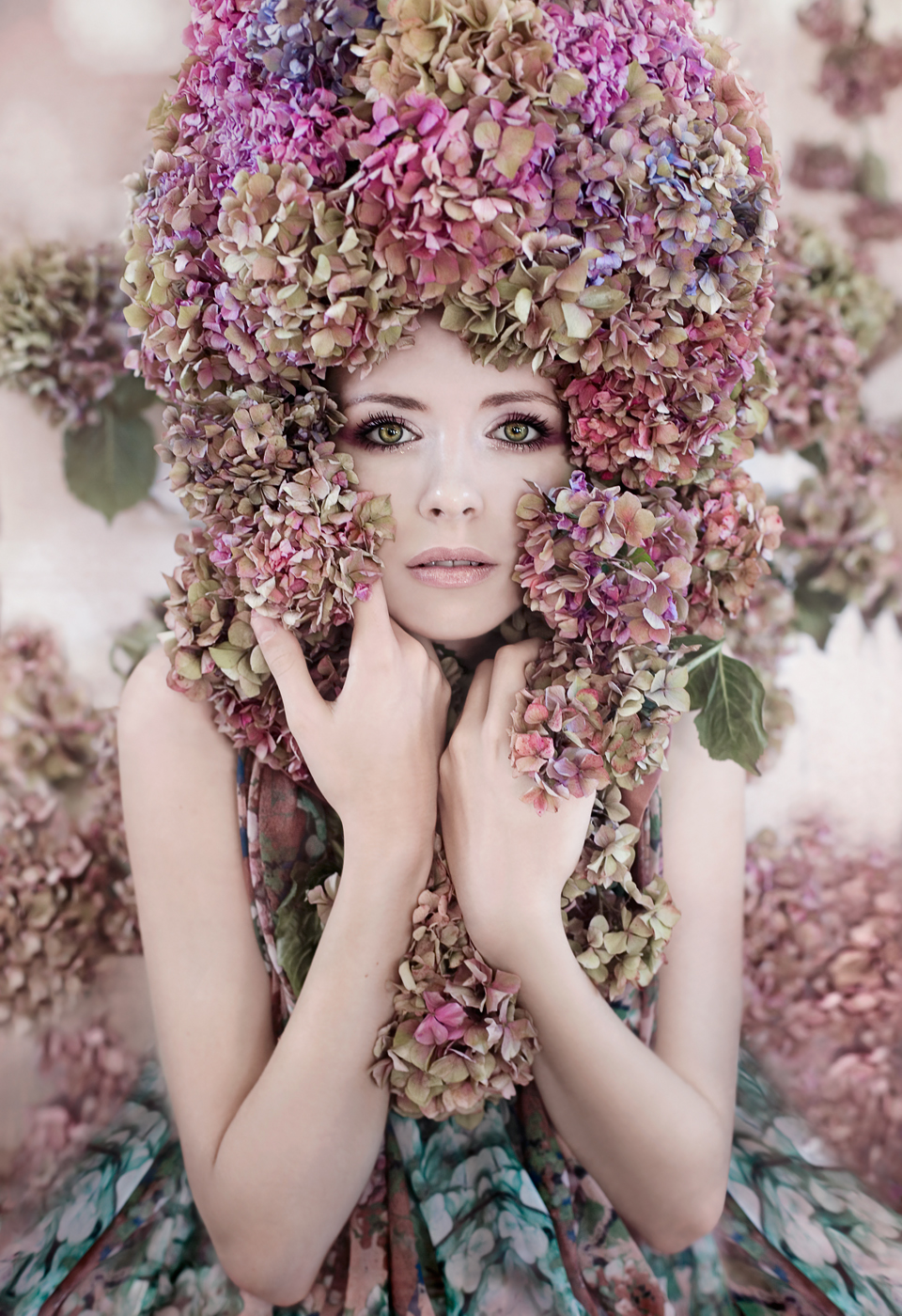 ‘Hydrangea Girl’
Finally…..
I’ve been taking the design of the characters more seriously than ever before, and trying my hand at making more elaborate costumes and props. I thought I’d include some pictures of their development as half the time I don’t think people truly understand that I make these things myself. I have no budget, so there always seems to be a story behind how they come together. I won’t lie, this creation was born from the contents of my garage – an old riding hat, some chicken wire, a cushion and a paint roller !
My huge problem was I couldn’t afford the amount of flowers I would need for the wig. I wrote to 3 florists, and even to a neighbor who had a large hydrangea bush, but no one replied. In desperation I contemplated stealing them from peoples gardens at night, but couldn’t face the guilt.
Eventually a kind local lady answered an advert I posted on a community website, and donated half her garden to us ! Within a few hours I walked away with 4 enormous sacks of fresh flowers in the most incredible soft colours, sometimes I can’t believe how kind strangers have been to me whilst producing this project, it really is humbling and some days makes the pictures even more emotional for me.