A deeply personal journal of life behind the camera written by Kirsty.
Previous
Back to gallery
Next
13th October 2009

Wonderland – ‘Lady of the Lake’ and ‘Dryad’ 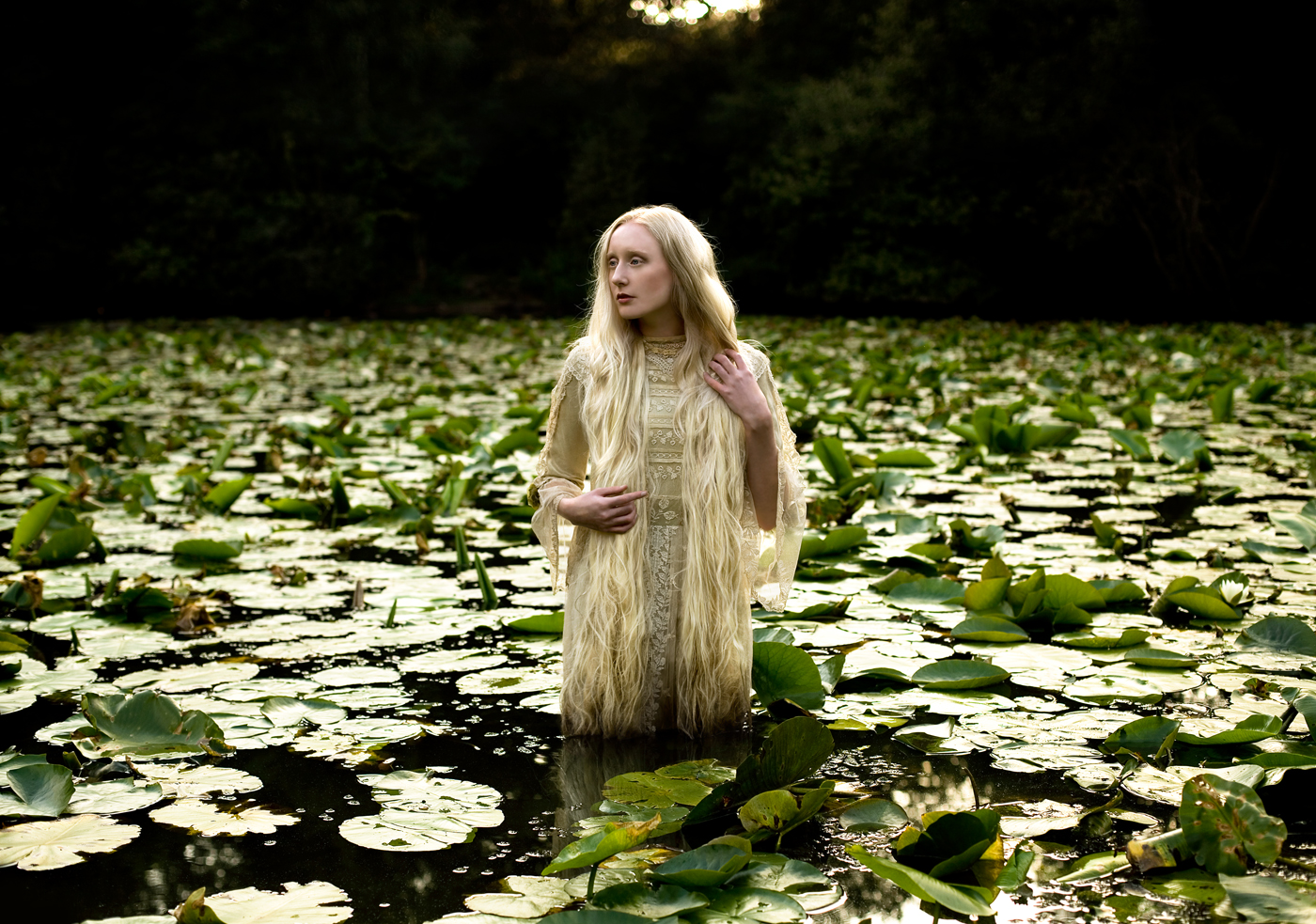 ‘Lady Of The Lake’ 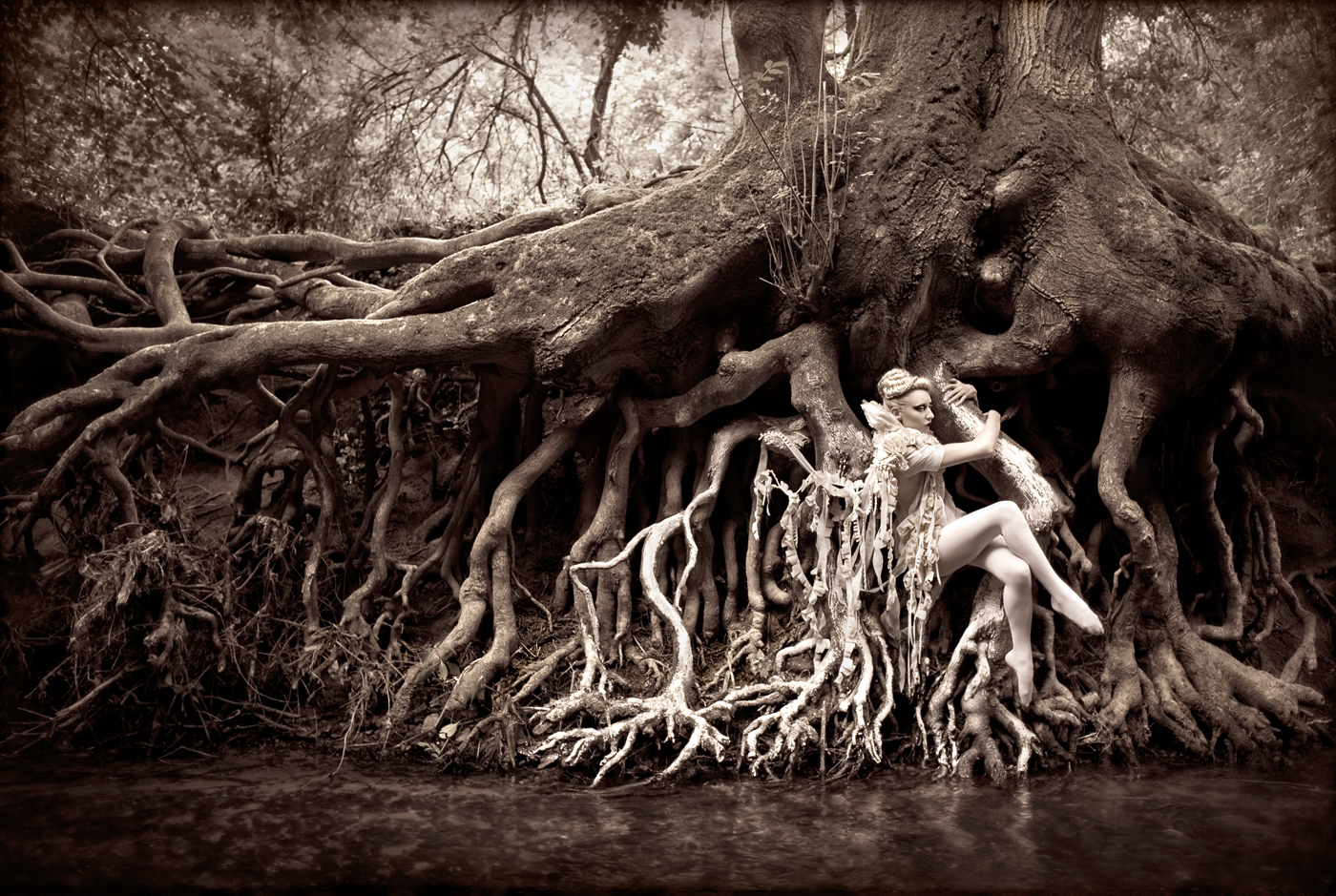 It was 6.30pm as we left the woods behind us after shooting ‘Once Upon a Time’. The van rattled and shook as we sped through the late Saturday traffic to reach the lake. I prayed the evening light would be just as magical as when I accidently stumbled on its inky depths earlier that morning. My head had filled with Pre Raphaelite ghosts, Ophelia, Camelot, The lady of the lake. I could picture Katie standing in the vast lilies half submerged with waist length hair, It was all so clear in my mind as I fumbled for my phone and immediately called Elbie. It was already mid August and I knew the lilies would soon be gone if didn’t we take this chance…..

As the van pulled up by the edge of the road and we all piled out. In preparation I had brought two wetsuits, a stool, and a bag of old towels. Without waiting for the others I ran ahead down the slope towards the lake. The sun would set at 7.30pm and it was already 6.40pm,  I pushed through the trees chanting under my breath with each leap  “Please be the same…… please be the same…..please………..”
It was, it was, it was….

The sky opened up as the trees bowed down, and there it was, a deep pool of green and shimmering black. My shouts echoed as I called back to my friends between squeals and whoops of “Come on, come on, before it’s too late, the light the light!!” I can’t explain why that place felt so special, but it felt undiscovered, like a page in a book that had never been turned. Even the evening sun seemed to hang patiently in the summer air, soft and warm like it had waited all day for us to arrive.
In my excitement I tugged the wetsuit on back to front, much to the amusement of Elbie who collapsed in giggles. It was a mans size, borrowed from a friend and was far too big. I looked ridiculous as a defined bottom shape suddenly ballooned out from my waist but there was no time to change it back! Time was running out as we stood around trying to decide how to protect Katie’s delicate lace dress until she could be positioned in the center of the lilies. Despite its beauty, the lake smelt like it was a thousand years old and the water was thick with dark slime. Katie balanced on one leg as we tried to pull the other wetsuit on her under the skirts, but it was taking too long and soon the sun would be hidden by the trees. Suddenly without warning Katie hitched up the lace and strode bare foot into the cold black sludge. She was dressed like an angel, her long flowing blonde hair shone in the light as she heaved herself further into the depths swearing at the top of her voice, I couldn’t stop laughing! I followed her path terrified of dropping my camera and even more worried one of us would fall into deep water without anyone to save us. Behind, Matt heroically climbed in offering to help, but instantly became stuck and couldn’t move. What a sight we all made,  Elbie sat on the waters edge howling with laugher at me trying to balance my camera on my head, Katie militantly staggering ahead and Matt shouting “I’m stuck I’m stuck !!”

Eventually we reached the center, and it was possible for Katie to balance on the dense network of lily roots. The whole lake was encircled with a dense thicket of dark trees, which left nothing more than a tiny halo of dappled light shimmering above her head. The light fell across Katie’s pale hair and melted into the dark liquid mirror beneath us. She had become the living, breathing painting I had dreamt of…… ‘Our Lady of the Lake’ was real and standing before me.
The only sounds were the birds and the rush of the wind in the trees, the hairs on the back of my neck stood up as I pressed the shutter, it was timeless. We stood there together in that moment for what must have only been around 15 minutes, and then the light was gone, and the spell broken.
We waded back to Elbie who held out the towels still laughing. We were filthy and smelt so bad it was unreal. Trying to get out of a tight wetsuit covered in slime was not a dignified thing, and in the end I was hopping about in my underwear, whilst Katie was tying to get the equally rancid dress off without ripping the lace. Once again I found myself looking at my friends and was filled with happiness, we had got the shot in the perfect light it had been amazing. We collected our bags of wet smelly clothes and traipsed back to the van barefoot and grinning from ear to ear. I couldn’t wipe the smile off my face the whole way home…. nothing makes me feel like this, nothing………

balancing on the roots shooting Katie

A week later we shot Katie as our ‘Dryad’ in the giant roots of an extraordinary tree I had discovered near my home. It was truly the most incredible find, and from the moment I came across it I had no doubt it would become a part of the series. Just like the lily pads it was unplanned and inspired by nature, but once again these impulse pictures can sometimes be the most rewarding and this was no exception. I had a vision of an underworld woodland fairy, that lived in the roots of the giant tree….. one so pale, that everything she touched turned white.
When I first showed the picture to a few friends no one believed the white roots were real and presumed the effect was created in post production, but for me this always feels so empty. Where is the joy in creating magic in a computer, when you can do it in real life? So I bought a big bucket of non toxic white powder paint, some decorating brushes and painted the tree for real. I never realised how liberating doing this kind of madness at 6am on a Sunday morning could be, but as I stood knee deep in the steam afterwards, trousers rolled up to take the shot, the feeling was indescribable.

Over the past few months I’m learning I’ve found an escape and happiness I’ve never felt before, and to be honest it is helping me cope with what’s happened over mum. I don’t always write about my everyday life in this diary anymore because frankly I prefer this new found fantasy and the friendships it has brought me. I never could have predicted the woods would become such a haven, they are my comfort and for now I am just so grateful I have this new world to runaway to.